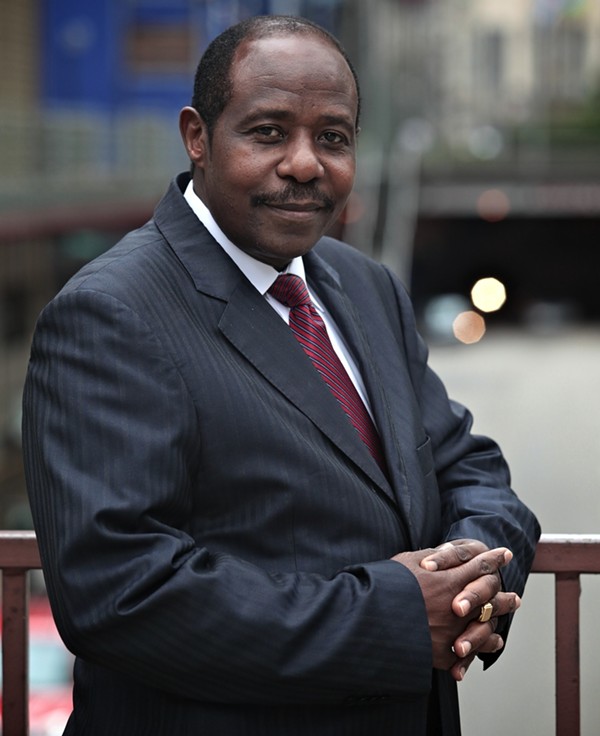 Courtesy of DreamWeek
After last week's announcement that Paul Rusesabagina, the subject of the award-winning film Hotel Rwanda, will serve as the keynote speaker for DreamWeek's Opening Ceremony Breakfast, all hell broke loose online.

Among the Twitter mentions that flooded the Current was a short missive from Rwanda's former Prosecutor General Jean Bosco Mutangana, who accused Rusesabagina of financing terrorism against his country.

British investigative journalist Linda Melvern, who's extensively covered the Rwandan genocide, also emailed the paper, questioning the veracity of Rusesabagina's story about how he saved nearly 1,300 lives during the 1994 mass slaughter in his country.

On Monday, the story of the speech was even picked up by Rwanda's New Times, which argued that Rusesabagina is being "given a platform to negate genocide" against the country's Tutsi ethnic minority.

Shokare Nakpodia, founder of San Antonio-based DreamWeek, defended the decision to invite Rusesabagina to speak at the Friday, January 10, breakfast. He said the former hotelier's experience makes him an important messenger of peace. DreamWeek is a series of events honoring the memory of civil rights leader Martin Luther King Jr.

"Paul [Rusesabagina]’s invitation as a keynote speaker is one, because he’s a resident of San Antonio, two, he’s a nationally honored resident of San Antonio," Nakpodia said, "and three — and probably the most important — he’s somebody who’s experienced incredible atrocities, and his continued survival of the trauma of the past makes him an individual that we ought to listen to, to get insight into how best we can all collectively live in peace."

The pushback over the speech follows controversy over last year's planned DreamWeek appearance of Rachel Dolezal, the white woman who made headlines in 2015 for claiming to be black. Ultimately, her appearance was cancelled after a Change.org petition calling for her disinvitation received 1,299 signatures.

At the time, Nakpodia also defended Dolezal's appearance, saying it was intended to foster important, if uncomfortable, discussions about race.

"We can't start to curate the summit through petitions and dissent," he said. "We can't have one group have ownership of [MLK's] dream."

To be sure, Rusesabagina has been lauded for his lifesaving efforts. Based on his account of the events that occurred at the Hôtel des Mille Collines in Kigali, Rwanda, he received both the Presidential Medal of Freedom and the Lantos Human Rights Prize.

However, in the years since Hotel Rwanda popularized his narrative, scholars, witnesses and survivors of the genocide have maintained Rusesabagina's story is untrue.

British journalist Malvern has also spoken out against Rusesabagina's version of the events. She's written three books on the Rwandan genocide, including the forthcoming Intent to Deceive, in which she covers "how the génocidaire — from the moment the crime began — denied it and turned the UN into a sort of forum for their denial."

Contacted by phone, Rusesabagina insisted that Melvern and other critics in the West could not possibly know what transpired at the Hôtel des Mille Collines.

"They do not know what was happening in Rwanda," he said. "Because for Linda [Melvern], she was not there, and also General Dallaire, who also was one of those witnesses who pretended to be there, was not really there as such.”

Melvern may not have been in Rwanda during the genocide, but she was present at the United Nations at that time, filming a television program for the UK's Channel 4 to commemorate the intergovernmental organization's 50th anniversary.

"I was outside the Security Council when the debates were taking place whether or not to withdraw from Rwanda," she said, "as the world shut the door on what was happening."

Melvern's Intent to Deceive, which is slated for release at the end of February, addresses Rusesabagina's story in depth, including what she said is evidence he extorted money from refugees.

"The people at the hotel had sent faxes complaining to the International Committee of the Red Cross in Kigali that they had to pay to shelter at the hotel," she said. "The checks — and this I had from two contacts of my own in Kigali — accepted by Rusesabagina for payment for the rooms were cashed in Gitarama, where the genocidal interim government had established its premises."

But Rusesabagina asserts that there was no money for him to receive.

"They pretend that I charged people money. Who had money in 1994?" he asked rhetorically. "When they came to my hotel, those people were coming almost naked."

All the individuals who took refuge at the Hôtel des Mille Collines survived the ordeal, which Rusesabagina credits to his personal efforts.

According to Melvern, the real reason for the survival of the refugees at the Hôtel des Mille Collines came down to public relations, not Rusesabagina's altruism.

"It suited Hutu par génocidaire to have the people stuck at this hotel, because it was quite a high profile with the Western press," she said.

"The refugees in the hotel mostly had visas to Belgium and they were high profile, so it suited the génocidaire to keep these people alive to say, 'Look, how can this be a génocidaire when we have these people here?'"

'What happened in Rwanda'

Rusesabagina insisted that violence and atrocities continue in his home country to this day, and that the Rwandan government wants him to be silenced for speaking out about it.

“What happened in Rwanda never stopped in Rwanda, as we say in Kinyarwanda: we changed the dancers but the music remains the same," he said. "The dancers were killers — the music of killing is still maintained."

“In 1994 when people were being butchered I never remained silent," he added. "I stood up and have fought for what I believed in from the beginning to the end. Why should I be silent or silenced today?”

Melvern pulls no punches about that defense, though: "I wouldn’t believe a word this man said for a start, certainly on Rwanda. I think it’s laughable that anybody can take him seriously when they know what his history is with the country and what he said about it and about [Rwandan President Paul] Kagame. ... He has no evidence for any of this at all."

Despite the widespread criticism, Nakpodia asserts that DreamWeek didn't choose Rusesabagina to promote his political agenda.

"Our goal here is not to invite somebody to have a political platform to spew anything," he said. "We are looking for someone to share what is human and how to overcome."

However, Melvern said she doesn't think Rusesabagina can be considered as separate from his politics.

“I don’t think that’s possible in this case,” she said.