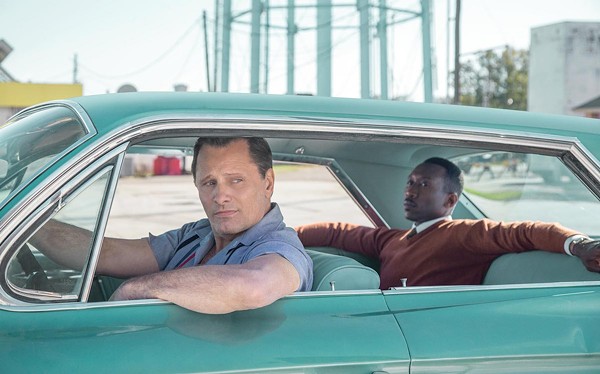 When filmmakers step out of their comfort zones, things can sometimes get interesting. This year, we saw gore hound Eli Roth (Hostel) craft a spooky, yet kid-friendly flick, with The House with a Clock in Its Walls. We also got another chapter from the Halloween horror franchise, this time from the perspective of drama/comedy director David Gordon Green (Stronger). Now, Peter Farrelly — one half of the directing duo known as the Farrelly brothers (Dumb and Dumber, There’s Something About Mary) — splits from his sibling for the first time and ventures out on his own to make Green Book, a charming, crowd-pleasing dramedy that, unfortunately, pulls its punches on race relations.

The men find themselves on the road together when Don hires Tony to be his driver and security during a two-month-long concert tour through the Deep South. This, of course, was during the Jim Crow era when laws mandated racial segregation. The film’s title refers to the “Negro Motorist Green Book,” a travel guide blacks could refer to so they could know which establishments (restaurants, hotels, etc.) were considered African-American-friendly. With Tony’s “innate ability to handle trouble,” they embark on a trip that ends with both of them learning about tolerance and true friendship.

Its messaging on race, however, is a little trickier. Green Book is serious when it needs to be, but there’s also humor at its heart. Recent films like The Help and Hidden Figures have also taken a more lighthearted approach to the painful subject of racism, and there’s no denying that it’s a tough balancing act that filmmakers need to be mindful of so they don’t appear flippant on the issue.

Green Book’s intention isn’t to preach or hammer a message home with harrowing images or depictions of ultra-realistic bigotry. If audiences are looking for something like that, they should go stream Mississippi Burning or American History X. Instead, Green Book is focused on the dynamic between Don and Tony and how they maneuver beyond their own personal biases to respect each other.

No one ever said racism in this country doesn’t exist anymore because Barack Obama was twice elected President, and no one is saying anything similar because Green Book, with all its mainstream appeal and handful of hokey clichés, is an enjoyable picture. Farrelly didn’t produce a flawless film, but he hit an appropriately inspirational and life-affirming theme and tone with ease.