D.T. Buffkin Talks About His New Project, Pinky Ring, and the Connection Between Sodomy and Rock 'n' Roll 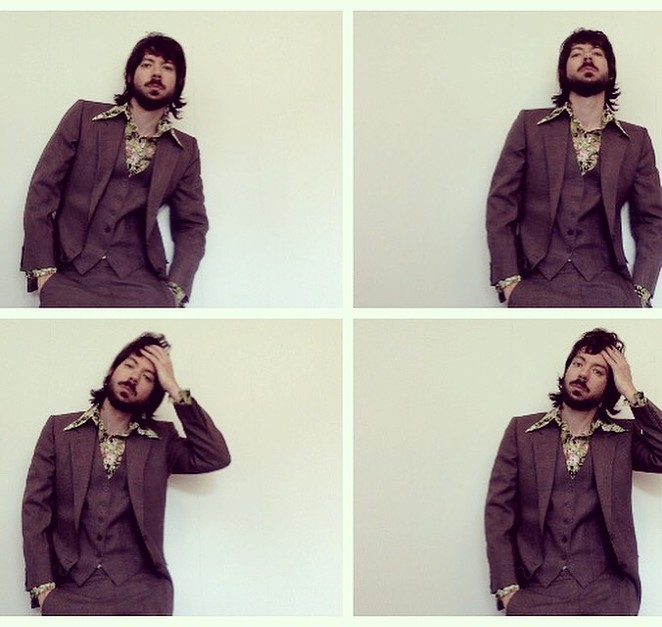 He's not just known for his warm tenor vocals and sharp songwriting but for the overall swagger he brings to the stage, whether with his eponymous band or country cover project The Texases.

Buffkin will unveil a new act, Pinky Ring, Saturday night with a performance at near-downtown honky tonk Lonesome Rose. He describes the band as a departure from country and folk and a headlong leap into ’70s-style rock. The debut also marks the end of D.T. Buffkin, the band.

We sat down with Buffkin to get a better idea of why he's making the musical transition. By way of transparency, we'll also note that Buffkin is a former music editor for the Current.

You mentioned in the press release that Pinky Ring sounds like Bob Seger playing Stooges tunes backed by CCR. Can you elaborate? What are the biggest differences are between D.T. Buffkin and Pinky Ring?
Pinky Ring is rock 'n’ roll. D.T. Buffkin was kind of folky. There’s like an alphabet soup of folk-country artists like D.T. Buffkin and Garret T. Capps, and I wanted to kind of get out of that, get out of the name game.

What were some other reasons for moving in this direction?
I just wanted to play different stuff, ya know? I wanted to have a lot of fun again and get really sweaty, and be really sexy and not sad, ya know? Have some fun, have some swagger and have some strut, and not be so coffeehouse. And we still got a waltz and tunes like “Breaking Up Is Hard to Do.”

There’s a Velvet Underground Song called "Venus in Furs," and it’s all about sadomasochism. And so I wrote a song with the subtitle “Penis in Furs” — it sounds like a Rolling Stones tune. It’s just like an homage to people back in the day. It name drops [French novelist, poet and activist] Jean Genet and [American novelist and counterculture figure] Ken Kesey, Chuck Berry and John Lee Hooker, and people that were doing hardcore, ballsy stuff.

Like what kind of stuff?
Like Genet was a homosexual writer who was arrested in every single country that he went to. But his whole thing was that he was really into SM, so he got off [on going to prison] and would write romantically about being incarcerated with all these pimps and queers, and how it was really wonderful for him. So, he kind of turned the whole culture of prison and authoritarianism on its head.

That’s awesome.
I’ve been really fascinated with the idea that we consider ourselves so progressive in this day and age, and we’re cutting edge, and our parents were so regressive, and before that they were so conservative. And we don’t realize that a lot of people back then were hugely radical. We just assume, "Oh, we’re so woke," and it’s, like, dude, there was a guy in the '20s going to prison on purpose so he could get fucked in the ass — by prison guards — that’s pretty fucking tough.

That’s my leading quote for this story.
[Laughs.] There ya go. That’s my take on classic rock. And it’s called "dad rock" and stuff — and, well, maybe your dad wanted to get fucked in the ass by a prison guard.

14 articles
Get our top picks for the best events in San Antonio every Thursday morning. Sign up for our Events Newsletter.
Scroll to read more Music Stories & Interviews articles
Join the San Antonio Current Press Club