Enjoy Screening of The Birds at San Antonio Botanical Garden 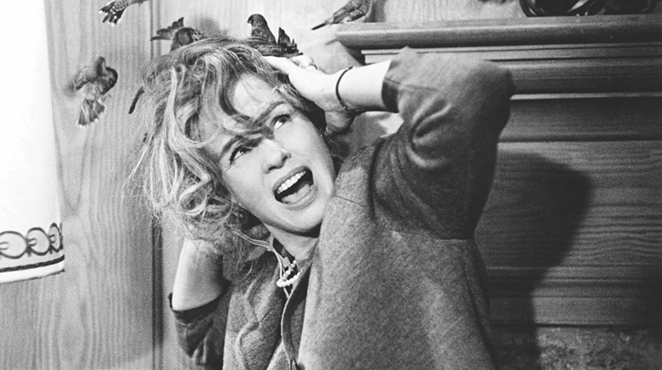 Courtesy of Universal Pictures
It all starts in a San Francisco pet shop where Melanie (Tippi Hedren) is nipped by a bird in a cage. By the end, she’ll be the one imprisoned as thousands of birds attack her bedroom. In between, the world goes to hell in a handbasket in Alfred Hitchcock’s milestone of Mother Nature’s revenge, based on English novelist Daphne Du Maurier’s ominous story The Birds.

While you watch the catalogue of classic scenes that combine squawks and effects with chilling moments of human hysteria, all orchestrated with a master’s command of visual storytelling, consider the ways in which the bird attacks might be brought on by Melanie’s unconscious desires, and consider the intelligent conversations between women. While Rod Taylor stands around looking handsome, a lot of the best lines go to Hedren, Jessica Tandy, Suzanne Pleshette and Veronica Cartwright as characters who have the most direct contact with the birds.

To wrap up its Starlight Movies in the Garden Series, the San Antonio Botanical Garden invites cinephiles to experience this nerve-wracking tale in the open air — likely surrounded by grackles — on Friday the 13th.