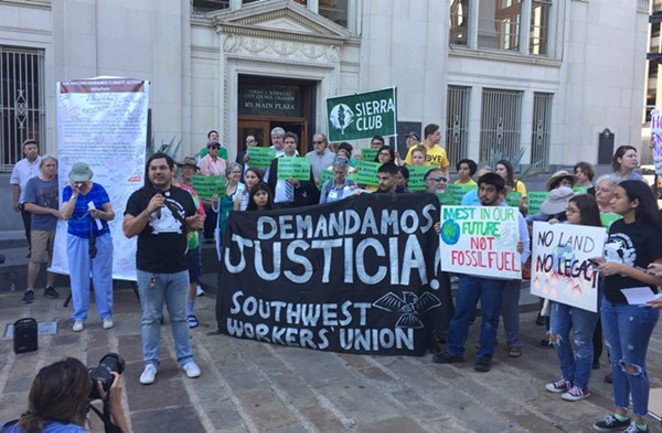 Sanford Nowlin
Climate activists, including members of the Sierra Club, rally in front of City Hall in 2019.
In an open letter to Mayor Ron Nirenberg and city council, 27 environmental and social justice groups urged the city to shield vulnerable residents from utility rate hikes and outages as it moves to meet climate goals.

The letter, posted on Earth Day, argues that February's Winter Storm Uri, which left millions of Texans without power, had the most devastating impact on low-income families, the elderly and people with disabilities. At least 133 Texans, including nine in Bexar County, died due to the storm, according to the most recent state health data.

The signatories — which include the Sierra Club's Lone Star Chapter and consumer watchdog Public Citizen — say that devastation is cause for local leaders to demand more accountability from city-owned utilities CPS Energy and San Antonio Water System.

Both CPS and SAWS have faced blistering criticism for their handling of the storm, and Nirenberg created an independent panel to investigate the outages.

"Today, in the shadow of the destruction of Winter Storm Uri, we see again how race and class have played a major component in who suffered and died, the letter states. "The experiences of those suffering through the freezing blackout with little or no insulation, for instance, those already homebound with preexisting illness and disability, were dramatically different than those who benefitted from more resources."

The signatories of the letter ask Nirenberg and council to make the following changes:
"CPS Energy and the San Antonio Water System have come under intense scrutiny for their failures in February to prevent massive blackouts and water shortage during a week of life-threatening Arctic cold weather," the letter adds. "But we understand that oversight of these utilities falls to our Mayor and this city council, as well as the council-appointed utility boards. Our shelves are heavy with plans spotlighting the vulnerabilities of our communities, but we have seen relatively little action."