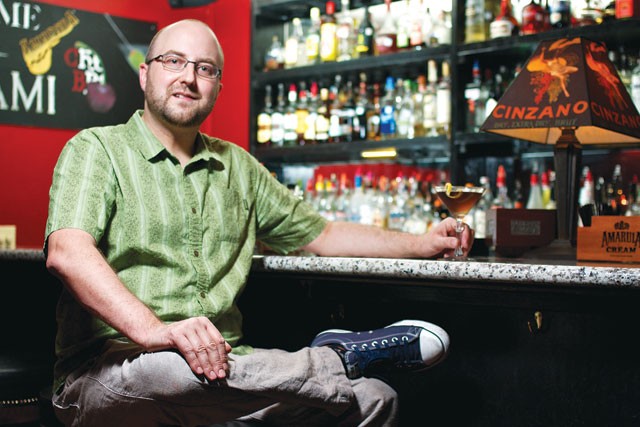 The soul of a good bar is a delicate thing. It is shaped by place, proprietor, and product to be sure, but then there's an ineluctable essence that comes from the people that tend to call a place home — whether night after night or on an as-needed basis. When Mon Ami, more formally known as Bar du Mon Ami, moved a few feet across a passageway from its shabbily comfortable digs behind Mon Thai on Broadway, there was a brief wrinkle in time. The transition to the more tailored space was soothed by the fact that MA's main bartender, Olaf Harmel, the bar's creative force, made the move as well. And then he left for the faster-paced world of Blue Box at Pearl. MA was left in need of a friend of its own.

Michael Rossetti, though he started out as a patron, has become that friend. Transferred to San Antonio three years ago by the financial services firm he worked for in Hartford, Connecticut, Rossetti's first bar ever was Mon Ami. "I fell in love with this place as a special home, as I was a little adrift at first. It was my clubhouse," he says. Friendships with Harmel and Gerry Shirley, the bar's owner, followed. The friendships and the sense of home endured; the job was another story. Seven years of the grinding world of finance proved to be more than enough. In February, he bailed on bonds and now finds himself in partnership with Shirley and running a bar.

Rossetti has bar/hospitality experience from Connecticut and Martha's Vineyard and even bartended in Italy while studying art history and economics in Florence. Eventually, the plan is to buy out Shirley's part of the business, at which time it will be all Rossetti's to meld into "something singular."

"If you offer that, a unique group of people will respond. It's as simple as a greeting, the telling of a story without giving a lecture … putting together an environment that's comfortable, warm…" and that welcomes everyone — gay, straight, and TBD. Fortunately, he has veteran bartender Chris Dortch, who came across the hall with the move, to aid in the endeavor.

"Yes, we'll make a Cosmo, and we'll make a good one; the drink we make you is the one you want to be drinking," says Rossetti — and as a regular walks in, "Gin tonight?" he asks. But there are still limits — such as no Goldschläger, no Red Bull … and, despite the concern of some, no TV. "We have limited shelf space," he continues, though that doesn't preclude select beers on tap and an evolving but tight wine list featuring an eclectic array from a simple, spritzy Vinho Verde to a quasi-cultish Napanook cab. Rossetti's personal preferences run to gin and bourbon, and "I'll reach for vodka last, but I never want to be the kind of place where you get looked at if you ask for a gin and tonic." Or a Cosmo.

I asked for something unexpected.

The Trilby has been around for more than a century and appears in the seminal Savoy Cocktail Book. Yet it has been called "a cocktail with something of an identity crisis" — meaning it's not clear what you'll get when you ask for it (other than a blank stare from many bartenders). Rossetti's version hews mostly to the Savoy tradition in that it is composed of equal parts parfait d'amour (a liqueur with orange and violet essences), Cinzano vermouth, and blended Scotch, plus a couple of drops of Pernod's absinthe. It's not a drink you want more than one of at any given sitting, but it's fascinating in that the whole is not necessarily predictable from the individual parts. And it's worth paying attention to its progress as it warms in the glass. Just like a bar warming to its audience.