Faith and Discourse Combine in Weekly Beer and Bible Meet-ups

Lauren De Hoyos
Thanks in large part to America’s long fundamentalist hangover, there’s an enduring cultural assumption that good Christians don’t drink good beer — a position that would surprise many of Christendom’s most notable names. It’s been half a millennium since Martin Luther held forth at ale-fueled “table talks” and the future hierarchs of the Church of England hung out at the White Horse Inn; Orthodox and Catholic monks had been marrying pints and prayers for centuries before that. Now, as Christian churches are hemorrhaging young people in record numbers, pubs have resurfaced as spaces in which to bear witness to the Gospel — a mission that, in San Antonio, involves some seriously no-bullshit discussions about belief.

Theology On Tap is the city’s oldest beer-and-Bible meet-up. Originally birthed in a Chicago suburb, the program brings Roman Catholic speakers into bars and brewpubs to for some real talk on church doctrine. The Archdiocese of San Antonio has run the program for the past decade, and according to archdiocesan communications direct Jordan McMorrough, it’s an essential avenue for ministry to San Antonio’s young-adult population.

“We cannot operate under the old model of the church, where we ring the bell and everyone comes to us,” McMorrough said. “That model is not a 21st-century model. It does not work. We have to be in the streets — as Pope Francis said, ‘The shepherds have to have the smell of the sheep.’”

I visited the Theology On Tap September session, held in the back room of Blue Star Brewpub (the archdiocese also started a Hill Country edition this summer, which currently convenes at Cibolo Creek Brewpub in Boerne). Roughly 100 people were in attendance, ranging from undergrads to retirees. Though the underagers stuck mostly to ice water, those who did imbibe appeared evenly split between Texican lagers and heartier darks like the Spire Stout. This latter group included the night’s speaker Friar Paul Schloemer, who periodically sipped from his shaker pint as he discussed Pope Francis’ encyclical Laudatio Si and its challenges to “throw-away culture.”

A tall man in a brown habit and white New Balance cross-trainers, Schloemer emphasized the link between having faith and taking action. Some of his suggested actions, such as regulation of climate change and controls on economic inequity, appeared to ruffle some conservative feathers (as did his digs at libertarianism and the Keystone Pipeline). And yet, the evening’s key quote came not from Pope Francis, but Pope Benedict XVI: “The external deserts in the world are growing, because the internal deserts have become so vast.” This grounding in the role of the heart and of individual conversion was at the center of the friar’s message, not a voting guide.

That’s not to suggest that everything tied up neatly. One particularly vehement interlocutor continued his discussion with Schloemer well after the Q&A was over, and while they didn’t end in agreement, they did end on a smile and a handshake. It was the sort of respectful and productive disagreement we’d do well to see imitated on the national stage. For now, it’s encouraging enough to witness in the back room of a brewpub.

“As you saw with the discussion tonight, sometimes it’s messy,” McMorrough said. “But it’s messy when you go out to the street.”

A few streets away, in the back building of The Friendly Spot, Pub Theology is practicing its own iteration of that street-level discussion. Founded two years ago by Gavin Rogers, Minister of Youth, Family, and Outreach at Christ Episcopal Church and Pub Theology’s MC, the weekly meet-up zigs where Theology On Tap zags. The weekly Wednesday evening gathering foregrounds interfaith dialogue, rather than a fixed theological perspective, with a strong accent on civic action. Past speakers include city councilmen, retired school administrators, and shepherds from several faith traditions.

My two visits to Pub Theology served as apt markers for the range of discussion Rogers facilitates. My first took place on October 4 (the feast day of Saint Francis, as it happened, and just a week after Theology On Tap tackled the Pope exhortation to save the earth), which featured Mitch Hagney, the founder of Local Sprout and a committed atheist. My second fell just weeks after the Sutherland Springs shootings and hosted Pastor Warren Beemer, a Pentecostal minister who met Rogers when both were ministering there in the immediate aftermath of the tragedy. Each meeting stretched its participants in different ways. Like Theology On Tap, they offered a glimpse of how honest exchanges over a few cold brews might restore America’s crippled national discourse. 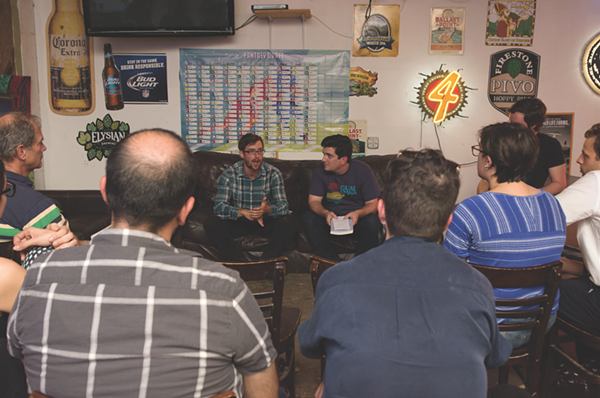 Lauren De Hoyos
Each Pub Theology was intimate, with 25 or so attendees circling up with IPAs and Topo Chicos in hand around Rogers and the week’s guest, situated on a well-loved couch. Hagney’s discussion wended along the connection between food security and the theology of land, addressing food deserts, carrots as a gateway vegetable, and a provocative posit that the secular world does a better job of keeping the Sabbath than believers do. There were no obvious kale converts at night’s end, but everyone left with some food for thought.

Pastor Beemer’s Pub Theology was, understandably, much heavier. Both he and Rogers had ministered directly to the families of the shooting victims; Rogers himself was the first person to be with Stephen Willeford, the NRA instructor who stopped Devin Patrick Kelley’s rampage. When talk turned, inevitably, to gun control, one attendee took strong exception to Beemer’s openess to his congregants’ continued carrying of firearms in church. The exchange was not comfortable, but it was fruitful — the real, necessary labor of working out issues at a common table, not the unaccountable echo chambers of social media.

Speaking later with Rogers, he expressed hope that Pub Theology’s discussions would lead to actionable outcomes for the common good.

“Hopefully, our dialogue is the best we can do to make it a two-way conversations,” he said. “A lot of religious communication is one-way. We’re not really about that. I think that’s an important dialogue in a faith community — you have to have convictions, you have to have solid beliefs, or else you’re just nothing, you’re watered down. Hopefully, what we say is doable.”

So, what role do beers play in all this? I found some direction from Matthew Aragones, a theology teacher at a private Catholic high school and Pub Theology regular. To him, beer not only provides these occasions for dialogue; it provides the appropriate response to the hope that faith offers its followers.

“I think that there is something associated with beer or wine or liquor where there is celebration,” Aragones said. “I drink coffee because I need to wake up in the morning or I need to deal with this conversation with a friend I haven’t seen in forever. But there is something about feasting and celebrating. Christ has brought the victory! The eschaton has already begun in our lives! Why aren’t we toasting to that?”