The trinity of politics, environment and healthcare might make you want to keep flipping pages, but rather than recapping another fruitless debate, we’re simply previewing a group of Blue Star Contemporary (BSC) exhibitions that speak to the troubled world we live in. One of two BSC Berlin Residency alumni in the bunch, artist and Texas State University professor Joey Fauerso is known for pensive animations, atmospheric portraits, amusing “drawing battles” and plenty in between. You may have even driven past her Canopy, a verdant, bird-filled mural she painted on the Fulton Avenue railroad underpass with assistance from Agnes Cotton Academy students. In recent years, Fauerso’s projects have braved tougher territory. Initiated in 2017, during her three-month residency at Berlin’s Künstlerhaus Bethanien, Fauerso’s ongoing project “You Destroy Every Special Thing I Make (We Fall to Pieces)” employs a graphic, black-and-white palette to address the chaotic political climate and the uncertain future awaiting her two young sons. Billed as the continuation of her investigation into culture, gender, family and humor, her “Teardowns” takes over Blue Star’s Main Gallery with a mélange of sculpture, video and a 50-foot mural inspired by the wallpaper in the Diplomatic Reception Room at the White House. Throughout the exhibition’s run, Fauerso will erode her mural as a performative commentary on “the destructive and restorative nature of humanity.” A fellow BSC Berlin Residency alum who holds degrees in biology, painting and printmaking, Margaret Craig describes her new exhibition “Sea Islands” as “a contemplation on the ways we affect the plants and animals around us, and how we may be affected by them.” Informed in part by her experiences in Berlin — where she collected sea-bound detritus on walks through the city streets — her solo show in Blue Star’s Middle Gallery presents upcycled plastic sculptures as imaginative creatures that “might one day populate the ocean as trash.” A Japanese artist specializing in kinetic work, Tsuyoshi Anzai tackles the human condition in “Healthy Machines,” an installation housed in BSC’s snug Gallery 4. Posing questions of wellness, ability and imperfection, Anzai’s work appears colorful and playful on the outside but in fact stems from brain surgery that left the artist with epilepsy. If all of the above leaves you longing for a bit of escapism, head for BSC’s Project Space, where Austin-based OK Mountain co-founder Sterling Allen and San Antonio’s own Larry Graeber join forces for “Formal Proof,” a two-man exhibition without much of an agenda beyond the interplay of odd sculptures that often begin with “physical and image-based debris gathered from various sources.” The opening reception will take place on October 4th from 6 p.m.-9 p.m. and will be free. 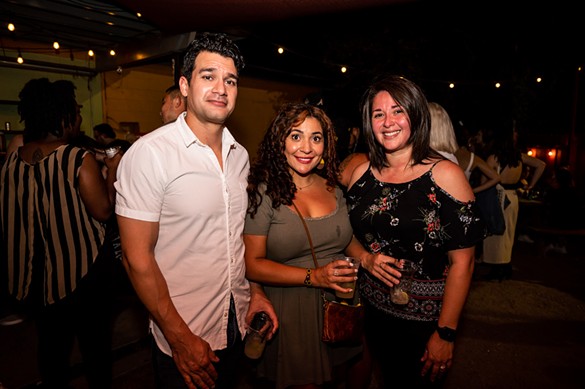