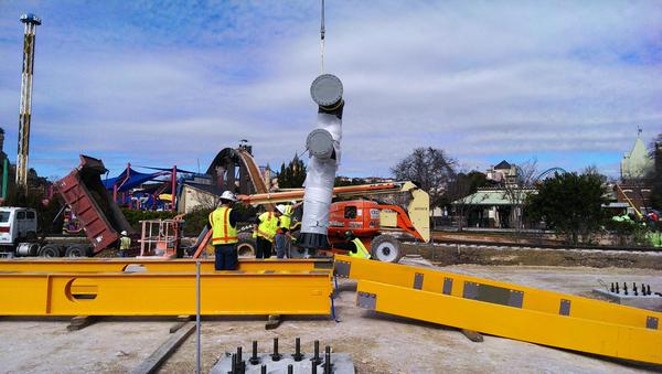 Fiesta Texas
Track for the world's first 4D roller coaster, Fiesta Texas' much anticipated Batman: The Ride has arrived in the Alamo City.

Six Flags Fiesta Texas has been tweeting about the ride's construction over the past few days.

If you haven't heard, the coaster, which is set to open in summer 2015, is an update to the classic Batman: The Ride coaster that opened in 1992. This was the first inversion roller coaster invented.

According to the maniac engineers at Six Flags, the ride "thrusts you into a totally immersive, high-speed Gotham City adventure. You'll board Batman's latest creation — a mind-warping thrill coaster loaded with special effects and cutting edge construction." We certainly hope so.

And it's all made possible by magnets.

"The utterly innovative design of the ride delivers a brand new coastering experience that is the only one of its kind in the world. Magnetic fins cause you to flip as you fly over the top of a 12-story hill and two beyond vertical drops," according to Six Flags.