F**K, the movie: Documentary explores the history of the F-word 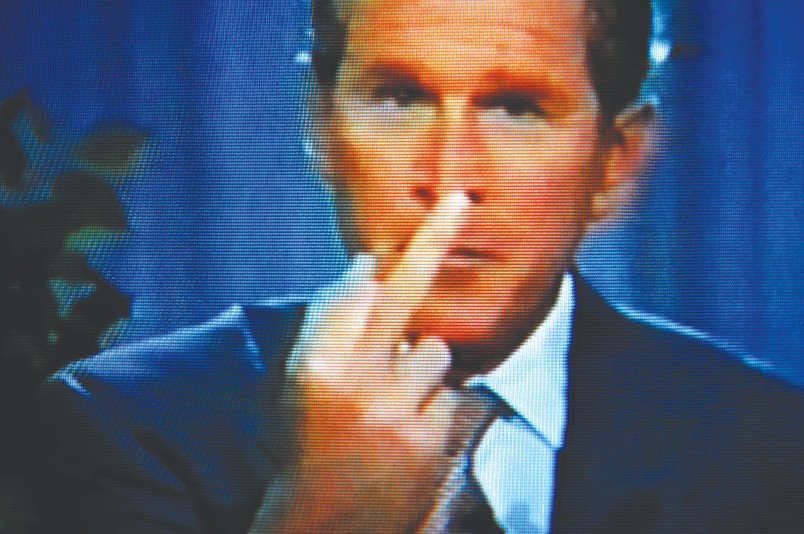 Dubya sends his love in ‘F**K: A Documentary’

“We’re going to murder those lousy Hun cocksuckers by the bushel-fucking-basket.” — General George S. Patton’s address to the troops on the eve of D-Day, 1944

If Patton can say it, why can’t I every once in a while?

But, where does the word come from and why are some people afraid to use it? Even 2005’s F**K: A Documentary, premiering on TV on the Documentary Channel in the early morning of May 28, has a tagline that says a lot about the word’s power: “The film that dares not speak its name.”

Using stock footage and exclusive interviews (Bill Maher and the late Hunter S. Thompson, among many others), the movie explores the origin, meaning, and consequences of the word and its usage.

From the urban-legend file on entomologies: Fuck has been wrongly rumored to be an ancient British acronym for “fornication under the consent of the King,” meaning that no one in ancient England could have sex unless authorized by the King, unless he was part of the Royal family. “Does that mean we’d be supposed to ask permission from George [W.] Bush?” asked Hunter S. Thompson in the movie. Although the existence of the supposed law is hard to document, it is widely accepted that the F.U.C.K. theory is a bogus one.

According to one of the interviewees, Jesse Sheidlower, editor at large of the Oxford English Dictionary and the author of The F-Word (not related to the film), the term was first used in writing in Flen flyys, an English satirical poem from 1475. “They’re not in Heaven because they’re fucking the wives of Ely,” says the poem.

It would be nearly 500 years later that it debuted in a major Hollywood film (Robert Altman’s MASH in 1970). In music, it was Eddy Duchin who used the word in his rendition of Louis Armstrong’s “Ol’ Man Mose” long before the advent of hip-hop. (He says “Ahh, fuck it!” even though some maintain he said “bucket”.)

J.D. Salinger’s The Catcher in the Rye includes six references to “fuck.” Three years earlier Norman Mailer had to use “fug” in The Naked and the Dead instead: “Fug you. Fug the goddamn gun.”

The documentary also explores how Federal Communications Commission complaints exploded during the Bush years. In 2000 there were only 111 complaints, but by 2004 there were 1,068,802. During this period fines went from $48,000 to $7,928,080. Ironies abound in fuck’s history. Dick Cheney used the word on the Senate floor (telling Senator Patrick Leahy: “Go fuck yourself.”) the same day the Senate passed a broadcast decency bill (the “Defense of Decency Act”) by a 99-1 vote. George W. Bush wasn’t immune to the word either, famously saying, “Fuck Saddam; We’re taking him out.” The President even showed his middle finger on camera in a video that first surfaced in 2006 before going viral.

If you really want to insult someone, “at least be creative,” suggests Pat Boone, the King of Clean, offering the following put-down alternatives: “You ragged cod piece.” “You pile of excrement.” “You’re an excretory sphincter, you know that?”

“In fact,” Boone continues, “I’ve turned my own name into my most used cursed word. When I hit a bad tennis shot or I make a bad mistake, I say, ‘Oh, Boone!’”

But is fuck necessary? Is censorship ever justified?

“A man curses when he can’t find the right words to communicate,” Malcolm X once said. “Free speech is important, but not everything is helpful for the human consciousness,” says a Hare Krishna interviewed in the movie.

(the movie’s internet live streaming will be available for 30 days after the broadcast at documentarychannel.com)