For Rebelle Staff, Knowledge is Power 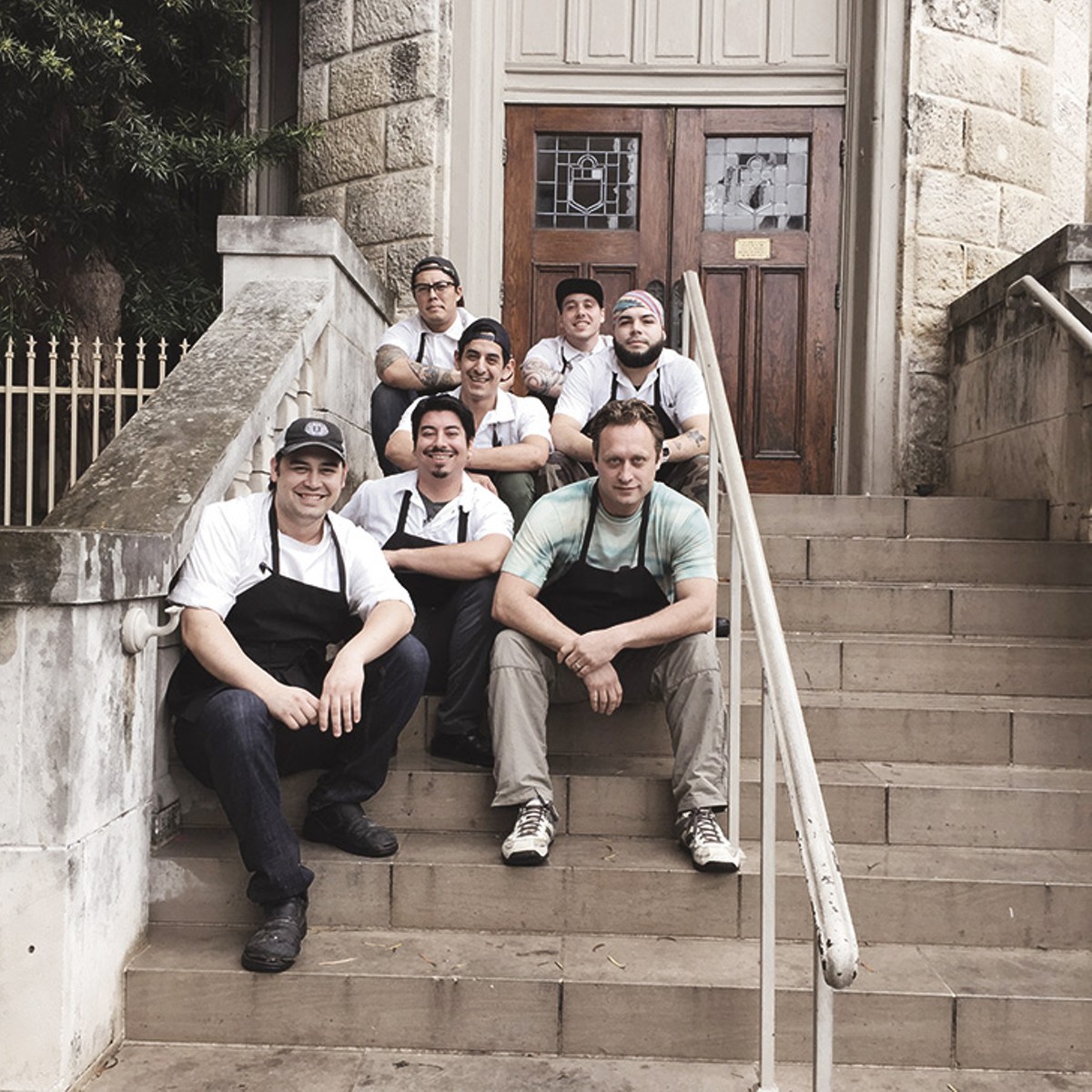 Editor's Note: For our next Squad Goals, bartender Karah Carmack visits with the opening team at Rebelle, winner of this year's Best New Restaurant.

There is no question that San Antonio is a city on the rise, and just like we see neighborhoods growing, our culinary scene is booming. A short decade ago there was not too much more than your friendly neighborhood "insert name of chain restaurant here," but today this is no longer commonplace.

You may know the names of a handful of local chefs that we all love, but who makes their ever-growing companies continue to open day in and day out?

I had the pleasure of sitting down with the amazing crew at Rebelle (300 E. Travis St.), recent winners of the San Antonio Current's Best of San Antonio yearly poll for restaurant and best chef, and getting some insight into one of the most unique kitchen programs in San Antonio.

Most people automatically think Stefan Bowers when they hear the names Feast and Rebelle. However, Bowers came out of the kitchen with his whole team and let them do the majority of the talking during the time I spent with them.

Alan Nelson, 28, formerly of Hot Joy and The Monterey, Sam Wratten, 29, formerly of The Monterey and Bohanan's Prime Steaks & Seafood, and Jake Gonzales, 24, formerly of Feast, all have one commonality — their chef's trust. Each week they are assigned days when one is tasked with creating the specials, one person is assigned the market vegetable dish, while another creates that night's off-menu special. These dishes often feature fresh ingredients from local farmers markets and local meat purveyors — such as Windy Hill Farms — and have included grilled veal tenderloin with crème fraiche, fennel escabeche, grilled tomato, fried masa and mango puree (a recent Wratten special), or Nelson's applewood smoked trout with Japanese cucumber salad of fennel, dill, green onion and wasabi crème fraiche.

While Bowers encourages his team to think creatively, what really matters is whether people are going to want to eat the dish.

The crew is challenged not only to come up with an outside-the-box dish but also to consider the money that goes into it and whether it will be an easy sell for the service staff. Bowers explains that there are nights that a dish will only be ordered once.

"If it doesn't sell, it forces them to think differently to get them to sell," Bowers explained.

This is a learning opportunity for his team and instead of being chastised, Bowers encourages them to try again and consider this occasion when coming up with new ideas.

A new daily dish is no easy task, and it requires the Rebelle crew to seek inspiration from various avenues. Wratten and Nelson take to social media and the happenings in the modern culinary scenes around the world when looking for inspiration, while Gonzalez tends to take a more off-the-cuff approach and go based on how he's feeling that day and what he would eat.

Learning to cook this way takes time, and Bowers stresses to his cooks that reading is the most important part of the learning process.

"Cooks don't read enough — I never fall asleep without a cookbook on my lap," he said, while listing a few authors, such as Alice Waters, Deborah Madison and Diana Kennedy, as his go-tos for reading.

Nelson explained that he enjoys finding random cookbooks at places like Half Price Books to find recipes that may have gone under the radar or been lost over time, while Wratten mentioned The Escoffier Cookbook and Guide to the Fine Art of Cookery as one of his favorites, and Gonzalez likes to take the occasional trip to the library to see what he can find there for cooking reads.

Outside of their kitchen program, Rebelle is also special in that it is inside a hotel — the historic St. Anthony Hotel. Bowers and crew agree that this may be a deterrent for some folks looking for a good meal but describes his place as "the anti-hotel restaurant."

In a typical hotel kitchen, cheap food is being pumped out for hundreds of guests a day, as massive kitchens cater to conferences, and cooks are just there for one reason — to cook the same menus day in and day out.

Not so at Rebelle. Instead, the food is prepared in-house by a small, dedicated kitchen family. The chef goes to various famers markets throughout the week and the menu is ever-changing. If you removed the hotel aspect and put it in a stand-alone building, it wouldn't change a thing about the daily functions of the rather small kitchen at Rebelle.

The hotel aspect does help in some ways, though, as it offers free valet to all of Rebelle's guests. In addition to their dinner menu, the crew is also there for lunch offering large portions made in-house, such as the French dip and a hearty cheeseburger for a reasonable price. On Sundays, the crew is there bright and early to prep for their recently launched brunch menu featuring delicious, sizeable variations on classic dishes.

With less than a year under their belt and lots of room to grow, the crew at Rebelle has already proven that they mean business. There is no doubt we will see much more from them in the near future.