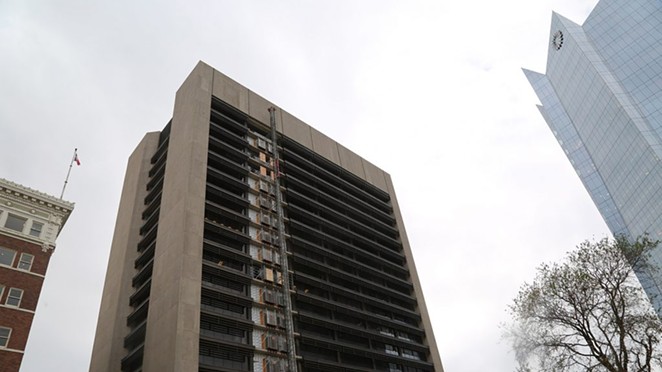 Ben Olivo / SA Heron
The City of San Antonio is renovating the former Frost Tower at 100 W. Houston St.
The City of San Antonio’s renovation of the former Frost Bank headquarters on West Houston Street has increased by $15.6 million to a total of $141 million, according to city officials who presented the City Council with a financial update on Thursday.

The council unanimously agreed to amend the contract with the Skanska-Nunnelly joint venture, which is overseeing what city officials call the City Tower project.

In 2015, the city purchased the circa-1975 building from Frost Bank for $52.9 million in a complex deal with the bank and developer Weston Urban that resulted in the new Frost Tower being built kitty-corner across North Flores Street.

Currently, the city spends about $3.8 million annually on leases for departments at seven different locations throughout the city. Those funds will help back the debt used to fund the project once those departments move into City Tower, officials said.

“This is the … final estimate, and we put an appropriate amount of contingency to cover for any addition unknowns,” Assistant City Manager Lori Houston told the council. “So we are very confident we are going to stay on schedule and within this budget.”

The city will lease seven floors of the 22-story tower to third party tenants. The plan also includes retail components on the first floor and a restaurant on the top floor. 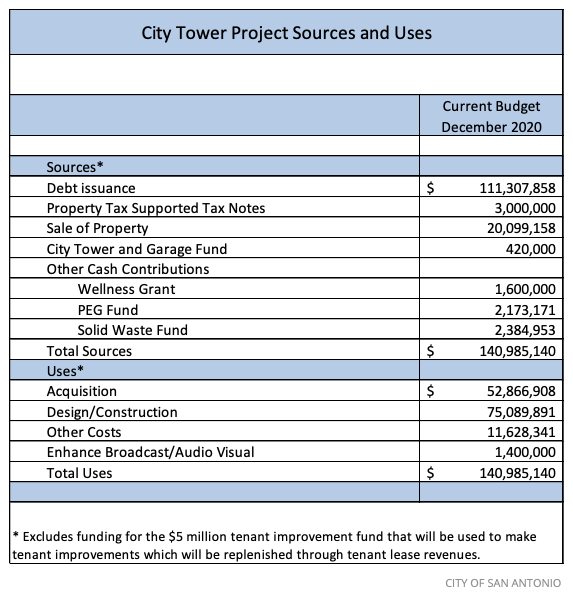 Additional costs include $4.58 million in mechanical, electrical and plumbing upgrades “not identified or appropriately priced” during the due diligence phase. The city is also adding $2.67 in security improvements, $2.38 million to include the Solid Waste Management department in the building, $1.73 million in Covid-19-related “return to work” redesigns such as doors one can open with the wave of a hand, $1.29 million worth of additional furniture , among other expenses. Read the complete list of changes.


City staff is expected to begin moving in in July, and be completed in February 2022.

District 10 Councilman Clayton Perry asked how the city expects to save money on the project despite an increased budget.

“This seems like a large amount of increase to then show more savings,” District 10 Councilman Clayton Perry said. “What’s the tradeoff there?”

Ben Gorzell, the city’s chief financial officer, said the city will apply proceeds from the sale of city properties, such as the former Continental Hotel, the San Fernando Gym and Municipal Plaza building, which will be sold to Weston Urban.

Gorzell also said the city will make money by offering the parking garage to the public on nights and weekends; and revenue from leasing seven floors.

“Also, our assumption on interest rates was much hirer,” Gorzell said. “Interest rates are lower. That allowed us to build in additional capacity for the project.”

For its part, Weston Urban plans to convert the properties it acquires into mixed-use development with an emphasis on housing. Under the agreement, the developer is required to produce 265 residential units. That includes converting the upper floors of the Municipal Plaza office building into housing units, while keeping the ground level as city council’s meeting space.

Weston Urban’s plan to repopulate west downtown goes far beyond the 265 residential units within the deal with Frost Bank and the city. The 32-story apartment tower it’s planning a block north alone will contain 351 units.