'From bad to worse': U.S. judge deplores conditions for Texas foster kids sent out of state 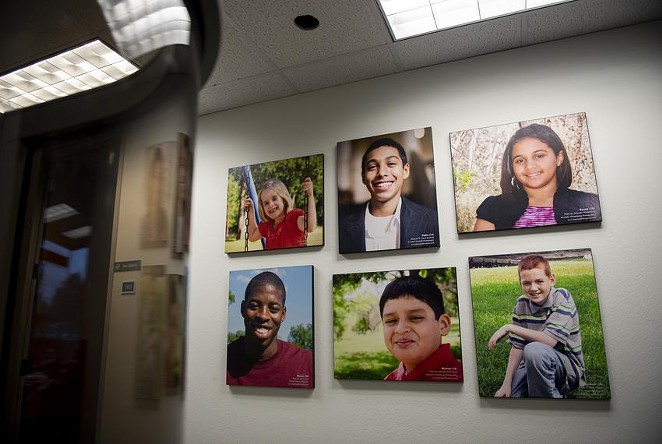 Texas Tribune / Eddie Gaspar
Portraits of adoptable children on display at the Child Protective Services office in Austin in 2019.
A Michigan facility housing Texas foster care children was missing its front door while it was 28 degrees outside and there hadn’t been indoor heat for 24 hours.

Staff didn’t make calls to get either the heat restored or the door fixed. They also didn’t attempt to move the children or give them blankets or jackets.

That’s just one of the out-of-state facilities where Texas recently sent 106 foster children, spending millions, after failing to find suitable placements in Texas, according to a new report from federal court-appointed monitors who act as watchdogs for the system.

A federal judge this week blasted state officials over this practice and once again threatened to issue financial sanctions against Texas for its lack of reform. The hearing — and threats of more penalties — were part of a yearslong lawsuit, which found Texas was violating the constitutional rights of foster children.

While noting there were “some bright spots,” U.S. District Judge Janis Jack criticized Department of Family and Protective Services officials over their care of children within the system, high workloads on individual caseworkers, ongoing placement woes and low COVID-19 vaccination rates among youth.

Some of the issues persist more than two years after Jack ordered reforms, she said, and she threatened to levy fines against the DFPS and to hold it in contempt of the court — which she has done twice already.

“It looks like we’re just going from bad to worse,” Jack said.

The Michigan facility had several documented violations ranging from staff members’ inappropriate behavior to negligence. When the court monitors visited in December, there were 14 Texas foster children in two Michigan facilities operated by the same organization.

“The children’s rooms resembled juvenile cells, with little-to-no furniture aside from a built-in, concrete or wood platform bed, covered by a plastic-covered mattress,” the court monitors wrote. “The units were dirty; the floors looked like they had not been cleaned … the monitoring team observed numerous safety hazards and items providing potential opportunities for youth to selfharm.”

Tuesday’s hearing comes just a day after the release of a report compiled by court-appointed watchdogs, which gave updates on children in unlicensed placements and details on the out-of-state facilities where some were placed.

“I had to read it and take breaks because it broke my heart that Texas is treating their children like this,” Jack said. “Sad, isn’t it? It just points out the failure of the system to help these children.”

Jack asked for an update on whether Child Protective Services could track where all of its foster children are placed — a problem Jack told them to fix previously — and expressed frustration when officials said the technology was still being developed.

“Oh, for God’s sake. I just don’t understand this incompetence ... You don’t know where the children are,” Jack said. “Now we know today, 11 years into this lawsuit, that no one knows where these children are placed. I’m speechless.”

Children in unlicensed placements and out of state


Texas has been facing a capacity crisis as many facilities — many of which deemed unsafe for children — opted to close or were shut down resulting in a loss of beds for some of the most vulnerable youth. Officials struggled to place children in appropriate facilities as a result, leading to record numbers of children staying in unlicensed placements — often dangerous or under-regulated — such as motels and CPS offices.

The number of children being housed in unlicensed placements peaked at 416 in July before it began decreasing. It ticked down to 236 in November, a figure still much higher than in past years.

But a large portion of those children are still spending long spells in CPS offices and rented properties, court documents showed. In November, 16% of children who spent nights in unlicensed placements were placed there for 36 days or longer.

During the ongoing placement crisis, Texas also had a sharp increase in the number of foster children it sent out of state. Between January 2021 and October 2021, an average of 38 children were sent out of Texas every month — compared to a monthly average of 21 for the year prior. In that period in 2021, the state spent $2.9 million to send children out of state.

Sending children out of state is “undesirable for many reasons,” a panel of experts said in a new court filing. The experts said the practice pulls children from their home communities which causes “a loss of critical connections, and keeping fewer eyes on the youth’s safety and well-being.”

Jack grilled Texas child care officials on Tuesday over the vaccination rate in the state’s foster care system, with 75.3% of those children not vaccinated for COVID-19.


She asked officials why the number of vaccinated children is so low. It is unclear whether that statistic includes children under 5, who are not yet eligible to be vaccinated.

State officials during the hearing revealed there is no mandate for a COVID-19 vaccine among foster youth. Some expressed difficulties in getting children to be vaccinated and said they refuse.

Jack dismissed that notion and noted that foster children have to be immunized for other diseases — such as mumps or measles. She called the lack of COVID-19 vaccination “negligence.”

“This continued, unconstitutional and unsafe treatment of these children is just getting to everybody that’s involved in this case,” Jack said.

The DFPS website outlines its policy on vaccinations for youth in CPS custody. “Unless there is known objection by the parent or person with legal authority over the child, the caseworker must ensure that children in DFPS conservatorship are immunized against disease,” the website states.

The department states its vaccine schedule is in accordance with the American Academy of Pediatrics. The AAP recommends COVID-19 vaccination for all children and adolescents 5 years old and older who do not have contraindications.

Federal dollars left on the table


Jack said the state was set to miss out on millions in federal funds because it is not compliant with the federal Family First program, which emphasizes preventive services to avoid having to remove children from their families and instead provide support to keep them intact.

Instead of wasting money sending children out of state to subpar facilities, Jack said the system could use those federal funds for things like attracting high-quality caregivers for the most troubled kids and create mobile mental health crisis intervention teams.

DFPS is expecting a loss of $17.4 million in federal support in 2022 and $25.6 million in 2023 because Texas is not compliant with Family First, court documents showed.

Last year, Jack ended a hearing earlier than expected to call for more collaboration between state officials, the court and attorneys representing foster children. All parties in the case — along with Gov. Greg Abbott’s blessing — agreed to tap three experts to seek solutions for the system’s capacity woes.

“Texas is a big state, but the magnitude of the problem here, I think, gave us pause,” said Judith Meltzer, one of the experts and president of The Center for the Study of Social Policy. “By setting up these unlicensed facilities across the state and staffing them with CPS workers — I think we found that very unusual and a little startling.”

Texas said it would “cooperate in good faith” but that the results were nonbinding.

“The current system of care in Texas is woefully inadequate, as evidenced by the steady number of parents who are relinquishing custody of their children with the hopes of getting mental health services,” the panel stated in the report.

Meltzer stressed during Tuesday’s hearing that increasing mental health services could prevent some children from ever being removed from their homes to begin with.

“It’s absolutely central because if your goal is to reduce the number of children and youth who have to come to the child welfare system, you have to have a streamlined system of mental health support to families,” Meltzer said.

The experts stressed pursuing solutions other than group facilities that handle numerous cases.

“The environment in these non-therapeutic settings is not stable. Children and direct care staff cycle through continuously. Programming may be limited, meaning children have little that is productive to do with their time. Conflict between residents is a constant,” the panel wrote. “Some residential placements are short-term, therapeutic, stable, and attentive to children’s needs, but many are not.”

State officials said the report was helpful and did not contest proposed solutions — but said time was needed to gauge feasibility.

Jack stressed that she wanted to see progress on a number of fronts and requested various actions and reports from DFPS in the meantime. The judge — who is retired except for this case and has overseen it for the entire time — said long-term solutions are necessary.

“I'm not going to have a stroke today. I can tell you that I’ll be around a while,” she said.