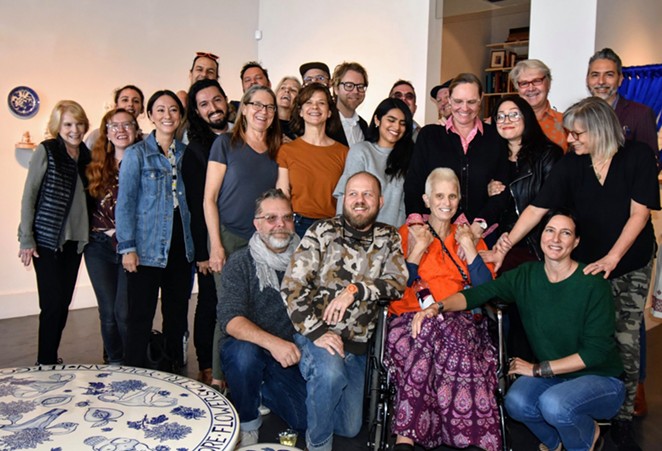 The Alamo City immediately lent its support. Within a single day, 135 donors contributed more than $18,000 dollars of the $30,000 GoFundMe goal. And there's no sign of the donations slowing.

Those familiar with Pell's contributions to the local art scene won't be surprised by the influx of funds. Pell and her late husband, master woodworker Peter Zubiate, moved to San Antonio in the mid '90s and were soon stalwart members of the art community. In 2006, Pell was selected as an Artpace International Artist-In-Residence, where she created the exhibition "Bitchen," from which Bitchen Stove was recently acquired by Ruby City. As an educator, Pell has ties to the University of Texas San Antonio, Northwest Vista College and the Southwest School of Art.

Pell has also contributed public works to the city, including murals at the Lackland Terrace and Nani Falcone Skate Parks, colorful playpads at Arnold Park Playground and an homage to the former flora and fauna of San Pedro Creek as part of the San Pedro Creek Culture Park Project.

Most recently, Ruiz-Healy Art brought together a special exhibition of Pell's work titled "Common Threads," which is on view in conjunction with Jennifer Ling Datchuk's "Don't Worry Be Happy." The exhibition opened with a December 7 reception and will remain on view through January 18, 2020.

Donors can contribute funds directly to Pell through GoFundMe.