Get the 411 on San Antonio's Nerdiest Podcast 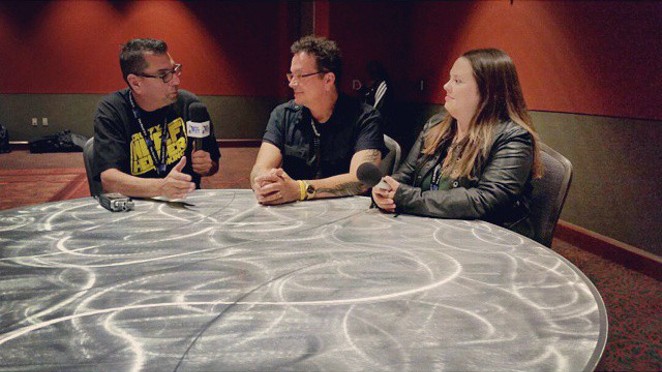 Courtesy Photo
The Nerd 411 at Alamo City Comic Con.
As one of the most popular local podcasts in San Antonio, The Nerd 411 team is doing their part to keep San Antonio nerdy.

The Nerd 411 is the brainchild of Jason Davis and Ken Farley. The pair met through the 501st Legion, a Star Wars-themed costuming and charity organization. Davis and Farley bonded over being dedicated podcast listeners. One day they got to talking about starting their own.

At first, Davis was reluctant. He did not want to commit to a project that might fizzle out. Farley reassured him how great it would be. They could hang out and talk about what they loved: comic books, video games, television shows, and movies. Eventually, Davis purchased some audio recording equipment, and The Nerd 411 was born. Soon after, they recruited Courtney Hudgens to co-host.

Courtesy
The Alamo Drafthouse will host Christmas Edition of the Cartoon Cereal Party on December 13 at their Stone Oak location. The Nerd 411 has played host in the past to the popular event series.
For the past year and a half, The Nerd 411 has kept San Antonio in the loop on all things nerdy. They were the official podcast of this year's Alamo City Comic Con where they interviewed celebrities, including Stan Lee and Danny Glover. With the Alamo Drafthouse playing host, The Nerd 411 sold out a viewing of the cult classic sci-fi film The Last Starfighter. They also hosted an Alamo Drafthouse Cartoon Cereal Party, where viewers got get hyped up on sugary cereal and childhood nostalgia as they screened your Saturday morning animated favorites.

If the Cartoon Cereal Party piqued your interest, the Drafthouse will have a Christmas Edition of the series on Saturday at the Stone Oak location, but The Nerd 411 won't be taking hosting duties for this particular edition, unfortunately. Be sure to wear your pajamas.

The success of these viewing parties is a surprise to the group. “We just show what we want to see, and it falls into place,” says Farley.

Things have not always gone their way, however. Back in May, they launched an Indiegogo campaign. Their goal was to raise $5,000 to upgrade their audio equipment, website, and cover some convention travel expenses. The campaign raised only $550—not even a quarter of their goal.

Nevertheless, they are still proud and humbled by the love that San Antonio’s burgeoning nerd community has shown them, especially Davis.

“The Nerd 411 has grown into something bigger than I imagined,”

You can listen to podcast episodes thenerd411.com and follow Davis and Farley on The Nerd 411 Facebook page.