Glitter Political: Councilwoman Rocha Garcia Keeps Her Distance but Stays in Touch With Constituents Near Lackland 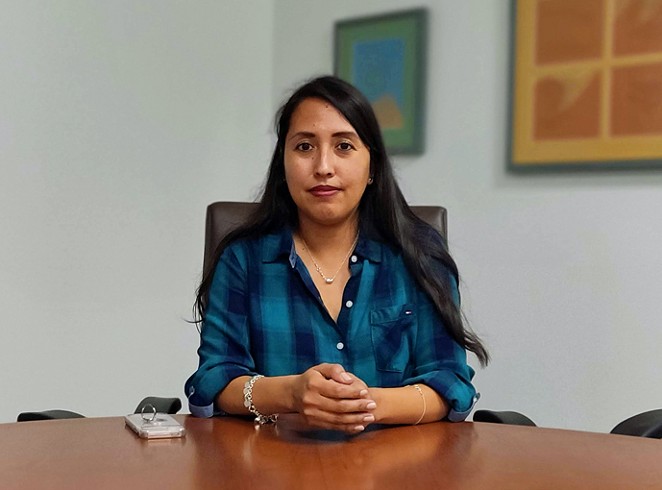 Although Lackland Air Force Base is a federal compound, it’s nestled in Rocha Garcia’s District 4 in Southwest San Antonio. Not yet a year into her first term, she was the councilmember most abruptly affected by last month’s decision to quarantine evacuees at the base.

Rocha Garcia’s role in this story began Superbowl Sunday, when she received a phone call from a reporter asking her about the possibility of repatriated coronavirus evacuees coming to Lackland.

As she gathered information on why the feds had selected it as one of the four locations for the mission, she became aware that not all bases had Lackland’s elite medical capabilities.

“I felt good about our federal delegation,” she says, adding that both state and federal officials were responsive to her questions about how safe her residents would be. “We were told that we were just getting folks that were asymptomatic at Lackland.”

That assurance helped put her at ease.

However, a few weeks later, Rocha Garcia learned through ABC News that Lackland might get a second round of evacuees. She hadn’t been briefed on the possibility and figured other city officials were also surprised by the news.
“At this point, I picked up the phone and I texted all of my federal delegation — except I didn’t have [U.S. Sen. Ted] Cruz’s mobile number — but I texted all of them and I said, ‘Hey, this is what I’m hearing. I need to make sure that you all are advocating for the right thing to do in San Antonio. We need more information.’”

In the end, neither she nor anyone in the delegation could put the brakes on the decision.

“We didn’t have a choice. We were just told: ‘You will be receiving evacuees.’ It’s not like we could say, ‘Wait! Hold on!’ They just kind of sent them,” she says. “So, my concern all along has been if coronavirus — COVID-19 — hits San Antonio, do we have enough resources to take care of our very own folks?”
Rocha Garcia now worries about the availability of hospital beds at facilities such as the Texas Center for Infectious Diseases.

“So, we see that there are cases across the United States. The threat of community spread is inevitable. We don’t know when it will happen but [our work is about] preparing for that,” she says.

“I’ve been asking questions for weeks now. I’m not going to lie, sometimes I feel like people at the beginning of this thought I was Chicken Little, but now they’re starting to realize ‘Oh, my goodness. Yeah, we should be doing this.’”
The next phase in addressing the crisis is outreach and messaging, says Rocha Garcia, a marketing professor at Our Lady of the Lake University. And messages need to get to vulnerable people who may not have Internet access.

“I think we should still do postcards,” she says. “Folks in District 4, they read their mail. It’s a physical postcard that they look at. The proof is all of us elected officials still use the mailers to get people to go out and vote. If mailers were not effective, we wouldn’t be wasting time and money on them.”

Rocha Garcia has also been in contact with SAWS and CPS to see if information can be included with bills via inserts or newsletters.

Also alarming to Rocha Garcia are videos she’s seen of college kids enjoying spring break at the Texas coast amid the outbreak.

“I will be completely honest with you. I am concerned that there are still some folks that are not taking this seriously,” she adds. “Because maybe you’re asymptomatic, or because maybe you think you are a little bit younger, you don’t think it could affect you. They don’t realize that they can still transmit this.”

She put her money where her mouth is at last Thursday’s council meeting, voting to extend the mayor’s emergency declaration closing bars and restaurants for 30 days.

“I think folks don’t realize the magnitude of something like this happening until it gets closer to home — and we don’t have that luxury to wait,” she says.
I tell her I was uncomfortable coming to see her during the outbreak and ask whether she was uncomfortable seeing me.

“No,” she replies. “I think with the social distancing, you’re one person. You’re sitting across the table, which is about six feet.”

That morning, she kept the same distance when meeting with councilmen John Courage and Roberto Treviño, she points out.

Rocha Garcia recently got the two of them hooked on Netflix, which should help them pass time as they ride out the crisis — along with coffee and tea she brought them for their Keurig. Her son, on an extended spring break, is helping make sure they don’t go anywhere.

“I’m a hugger, and I haven’t hugged, like, even my parents. I haven’t hugged them, and so especially for me it’s…” She gives a deep sigh. “You can never be too cautious, not with something that’s unknown as COVID-19.”

I ask if this experience will change us as a culture.

She pauses for a moment. “Probably. Maybe, eventually, after we see that the disease is gone, maybe we’ll get back handshakes and then eventually, hugs ... or something. But I do think that some behaviors are just going to probably be changed forever.”