Glitter Political: Robert Vargas III — The Pain in the Ass of the Democratic Party 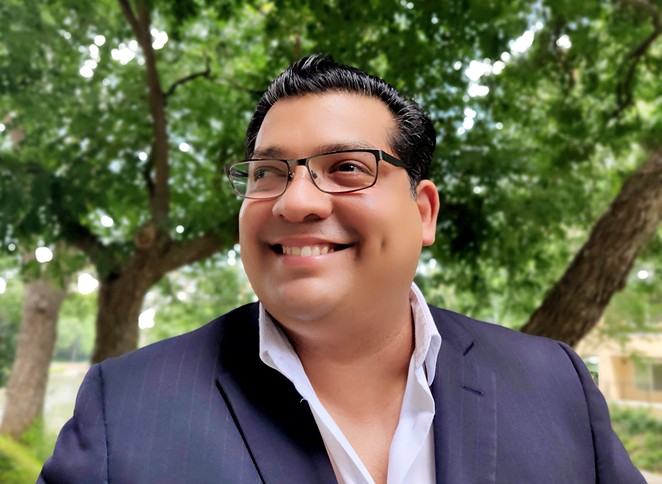 Jade Esteban Estrada
If you’re a Bexar County elected official, Robert Vargas III wants you to know that if you don’t protect and defend your constituents, he’s eager to replace you with someone who will.

Brazen, persevering and always to-the-point, the Democratic political strategist and radio host has never been one to mince words, even at the risk of potentially being at the center of an online firestorm.

I first met Vargas in 2007, back when he was a member of Metropolitan Community Church of San Antonio. His role as an LGBTQ+ activist has allowed our paths to cross many times since then. As we connect on video chat for this piece, it’s sometimes necessary for me to ask him to contextually clarify whether he’s speaking to me as a Christian, a Democrat or a gay activist. The answer is never what I assume.

Vargas’ maternal great-grandmother inspired his lifelong relationship with the church. Even today, he feels most authentic when he’s in worship, which is why his faith and political work are so intertwined.

Vargas’ earliest political interaction was with one of the most celebrated Latino leaders in American history, the late U.S. Rep. Henry B. González. Then a boy scout, Vargas was one of the first students to greet the congressman when he visited his namesake, Henry B. González Elementary School.

“He was my first political hero,” Vargas says, beaming.

Vargas’ first political campaign came shortly after that visit, when the school announced that it would undergo a name change. Vargas was motivated to take action.

“[The school administrators] were pissed at me!” he says with a puckish laugh. “I would hang out at the PTA meetings with the PTA moms. I got over 500 signatures from parents and teachers. When they announced that they would not be changing the name of the school, that was a super-cool moment in my life.”

It was also a defining moment that set him on his present course.

“It is still Henry B. González Elementary,” he says.

I ask if he likes to make people angry.

“I don’t mind when people are upset with me,” he says, laughing. “Look, if someone’s pissed off at me, then [that means] I’m doing something right. I love when people talk about me. My name is on their lips.”

Although now a well-known figure in local Democratic politics, Vargas wasn’t always on the Team Blue. At the age of 18, he served a two-year term as a local GOP precinct chair.

“I thought I was a Republican back when I thought I could force myself to be straight. I went to the pray-away-the-gay camp and everything,” he quips. “Growing up in the church, homosexuality was a demon. It was a spirit.”

Things changed when, at the age of 22, he came out.

While processing his future with the Republican Party, he began volunteering for LGBTQ+ community groups. The work provided an outlet for his boundless energy — in an environment where it was comparatively more appreciated. In 2007, he was on the steering committee for the San Antonio LGBT Chamber of Commerce and co-founded the short-lived Ignite-SA Magazine.

Voting for Senator Barack Obama in the 2008 Democratic Primary marked the beginning of a new journey for Vargas. I crossed professional paths with him again the night Julian Castro won the 2009 mayoral election.

“I remember you telling me, ‘You’re not just gay. You’re full-time, for-a-living gay,’” Vargas recalls with a laugh.

I actually remember saying that.

“At that time, I was so young and foolish. I burnt bridges,” he says. “If I could go back to that time, I would do a better job at investing in people and cultivating relationships.”

“We took out three incumbents — LaHood, Manuel Medina and Diana Arevalo — in one primary,” the political consultant says with lingering satisfaction.

Two of the candidates that election cycle most significantly marked his career: Salazar and local Democratic Party Chair Monica Alcántara.

What Vargas did the day after the March 3 primary made headlines — and brought an abrupt change in his work life. After qualified Republican candidate Willie Ng took an electoral beating from former Bexar County Clerk Gerard “Gerry” Rickhoff, Vargas took to Facebook to voice his feelings.

“[Ng] lost to a guy who doesn’t have law-enforcement experience but has a very popular white last name,” he says.

The backlash was immediate.

“Generally speaking, Republicans in Bexar County are not racist, [but Rickhoff] was the only Anglo last name on the ballot,” Vargas said. “I know what I said was uncomfortable and it really upset a lot of folks, and I kind of knew that was going to be a problem for the sheriff no matter what happened.”
A day after making the virtiolic post, Vargas resigned his position as intergovernmental affairs specialist and community liaison with the Bexar County Sheriff’s Office.

“I’m an activist at heart. Having a muzzle on and having to watch what I say because it reflects upon another person is an uncomfortable place for me. Was I wrong? No. Did I apologize? No.”

Vargas now serves as government affairs liaison for the law firm Phipps, Deacon, Purnell PLCC and soon will transition to a more senior role. His employer allows him the freedom to work on Democratic campaigns.
Before we end our video call, I give Vargas a chance to further explain his role in local politics. “Robert Vargas III is the blank of the Democratic Party,” I prompt.

He ponders for a moment. “I’d say I’m the pain in the ass of the Democratic Party,” he says. “Actually, I fucking love that.”