Goony, giddy, and insecure: a masterful Christopher Plummer comes out 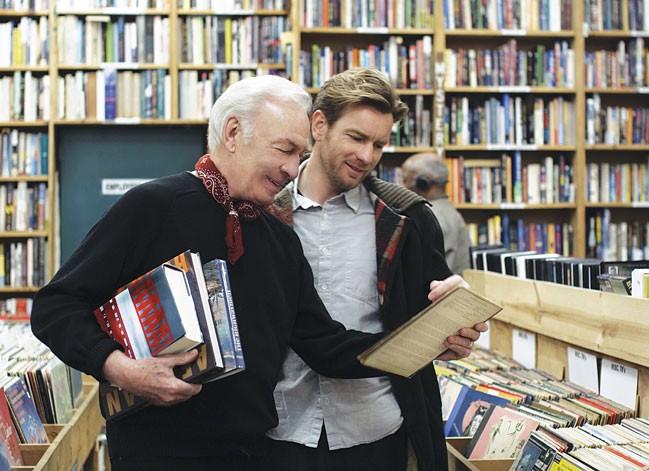 Courtesy photo
Thank these guys (especially the one on the left) for avoiding a major tear-jerker in Beginners.

Christopher Plummer is glorious. As glorious in rainbow scarves and fitted sweaters and hospital gowns as Hal in Beginners as he was in those dark, dashing suits as the whistle-happy Captain Von Trapp in The Sound of Music. Consider this the commencement of my campaign to make Plummer People’s Sexiest Man Alive. He is 81.

Beginners’ director-writer Mike Mills had the good fortune of acquiring the world’s second most twinkly eyed (though less roguish) working actor — Ewan McGregor — to play Hal’s son, Oliver, a graphic artist, in this sad-funny-winsome film. The two characters were never peas in a pod, but after Oliver’s mother dies of cancer, Hal drops two bombshells that bring them closer: He is gay; he is dying. The non-linear narrative entwines life before and after. Also in the mix are Oliver’s bitter childhood memories of his neglected yet wonderfully idiosyncratic mother (Mary Page Keller), and slide-show-like montages that succinctly contextualize each character in terms of their generational particulars.

Free to be more than a “theoretical gay man,” Hal takes out a personal ad, dances gingerly in his first-ever gay bar, becomes a letter-writing activist, and proudly starts dating Andy (Goran Visnjic), a sweet, silly, stringy fellow no more than Oliver’s age.

It is unlikely a slip then, when, in an early scene set after his father’s passing, a grieving Oliver attends a dimly lighted costume party dressed as Freud and meets a woman very like his mother. This romantic plot is off-and-on compelling, despite the participation of the lovely and engaging Mélanie Laurent (whom you will remember as she of the lipstick-war paint in Inglourious Basterds) as an actress named Anna.

Beginners is an autobiographical film, though, and a central preoccupation for Mills’ stand-in, Oliver — as well as anyone with parents currently or formerly in a loveless union — is whether couples are all doomed. At one point, Hal encourages Oliver to take out a personal ad, too, reading: “I’m a person who wants to be in a relationship but can’t stay in one.” Oliver needs Anna in order to do in the present what his father had to wait until the end of his life to do: permit himself to give love an honest shot. Scary.

The film, which could have solely been a meticulously styled tearjerker, inhabits a rare and special realm of just-enough quirk best illustrated in the character (yes, character) of Hal’s Jack Russell terrier, inherited by Oliver, and whose thoughts are imposed in understated font at the bottom of the frame. At an invitation to speak: “Though I can understand up to 150 words — I cannot talk.” About Anna: “Are we married yet?”

No actor, human or otherwise, could steal this show from Plummer, generous an actor as he is. When Hal is joyful, he is weightless, at times goony and giddy as a child so happy he can’t even fully open his eyes. In his fish-out-of-water moments, Plummer’s eyes betray what the rest of his body does not: a speck of insecurity. Christopher Plummer is glorious.