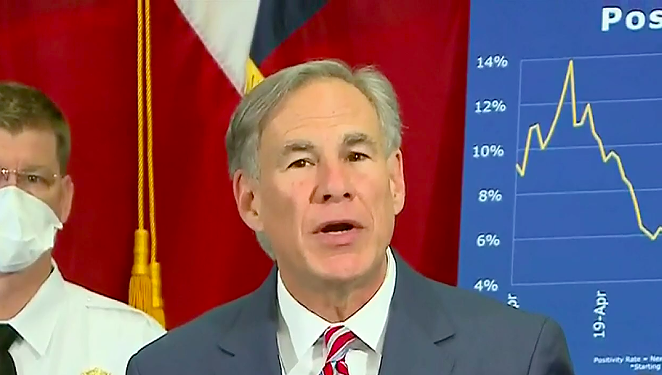 Screen Capture / KSAT
Gov. Greg Abbott speaks during Monday's press briefing.
For the second time in less than a week, Gov. Greg Abbott made the media rounds to assure Texans we're not running out of hospital beds, even as the state grapples with record COVID-19 hospitalizations.

During a press briefing Monday from the capitol, Texas' Republican governor called the numbers "unacceptable." He even trotted out top medical experts to explain that hospitals were prepared for the surge in cases.

But Abbott unveiled no new policies to combat the alarming spread, nor did he throttle back any of his briskly enacted reopening steps, which now allow most businesses around Texas to operate at 50% capacity.

Instead, he touted the state's crackdown on bars being lax with social distancing rules and added that another statewide stay-at-home order "will always be the last option." He urged Texans to wear masks, but stopped short of mandating them — as has been done in San Antonio and other big cities — saying that they may not be necessary in rural areas.

Critics have repeatedly charged that Abbott rushed the state's reopening, initiating steps before adequate testing was in place. They also argue that he hurried into the second and third phases of his plan before data clearly showed the effects of the first.

On Monday, U.S. Rep. Veronica Escobar told the Texas Tribune Abbott's leadership during the pandemic has been a "total failure" because he rushed ahead before adequate testing was in place.

"You have to deal with the health crisis before you can build the confidence necessary to address the economic crisis," the El Paso Democrat said.

In an emailed statement, Texas Democratic Party Chair Gilberto Hinojosa accused the governor of playing fast and loose with the facts during recent media briefings.

“We’re left wondering what our suffering was for when our governor turns his back on those who are desperate and dying, refuses to offer solutions, and continues to lie about this pandemic," Hinojosa said. "In every single way, by every single metric, Gov. Abbott and Republicans have failed."

The criticism isn't just coming from Democratic lawmakers, however.

Ashish Jha, director of Harvard’s Global Health Institute, told ABC News on Tuesday that states such as Texas opened before the first wave of coronavirus cases had begun to dwindle, triggering the rise of cases now sweeping the Sunbelt.

"It's concerning, though not entirely surprising," Jha said. "We know that a lot of states opened up before the number of cases had really declined, and opened up too quickly without good safeguards in."