Gov. Greg Abbott’s Gamble on Opening the Texas Economy Has High Stakes for Workers Across the State 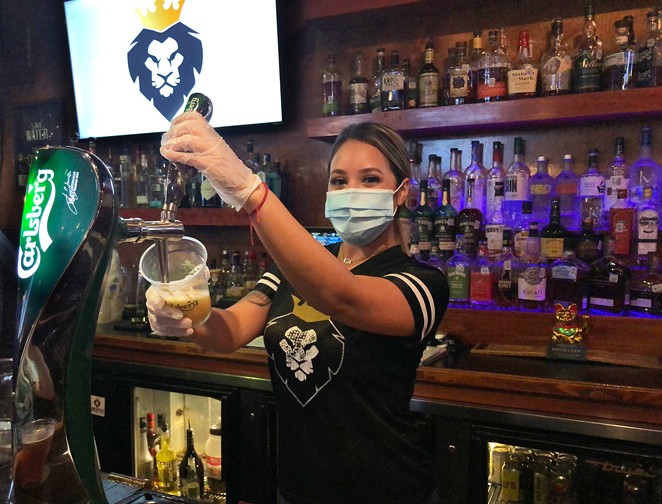 Nina Rangel
Brad Lewis, a bar employee at San Antonio’s Hotel Emma, has been worried about being called back to work. But not as much as three coworkers who are immunocompromised and face higher health risks during the coronavirus pandemic.

Lewis said he’s glad bars weren’t cleared to open on Friday, May 1, when Gov. Greg Abbott allowed restaurants, retailers and malls to reopen at 25% capacity. According to Lewis, the plan poses big risks to people who draw a paycheck dealing with the public.

“The state is kind of shooting itself in the foot and putting workers in danger,” he said. “I think we’re going to see more infections.”

The Republican governor’s plan to reopen the economy before Texas’ COVID-19 infection rates have clearly peaked is a gamble, labor advocates argue. It’s a gamble with the lives of workers and their families.

The reopening came a day after Texas reported its highest daily death toll from COVID-19 – a total of 50 fatalites. The same day, another 1,033 people tested positive, one of the state’s highest single-day totals.

As of May 3, 31,548 Texans tested positive for the coronavirus and 867 have died. Last weekend — the first under Abbott’s reopening — Dallas County tallied its biggest single-day jump in COVID-19 cases, adding 234 on Sunday. Houston, meanwhile, recorded five deaths on Saturday, matching its highest single-day death toll.

“Superseding local stay-at-home rules without the full virus-fighting infrastructure recommended by medical experts is a recipe for disaster for working families and all Texans,” said Rick Levy, president of the Texas AFL-CIO. “The Governor’s plan can do much more to assure that working people will be safe when they are back on the job.”

If the state is going to move ahead on a broad reopening of the economy, it should require employers to provide personal protective equipment and additional safety rules, Levy added. What’s more, it should offer protections to workers who report violations of the standards.

Diana Lopez, executive director of the Southwest Workers Union, worries that if the return-to-work order results in a resurgence of COVID-19 cases, San Antonio could be hit especially hard. Roughly 13% of the city’s labor force works in the hospitality industry, where face-to-face interactions are part of the job and social distancing is difficult.

Many low-wage workers furloughed from restaurant, retail and hotel jobs may feel no option but return, even if they have underlying conditions such as diabetes or high blood pressure or live in a household someone in a high-risk group.

“You have no other option but to pick between paying your bills and keeping your family afloat or risking your health or the health of someone you live with,” Lopez said.

While doing interviews to sell his reopening plan, Abbott repeatedly stressed that he’s working with medical professionals to guide the effort and that the state could slam on the brakes on the next phase of the plan, scheduled for May 18, if cases increase.

“All the key metrics are going in the right direction, and that is exactly why the doctors advised us that we had the green light to open up to the extent we are opening up,” Abbott recently told the Texas Tribune.

By “all the key metrics,” the governor actually is referring to just two of them. That pair of statistics is state’s infection rate, or the ratio of positive cases to the total number of tests, and its hospitalization rate, the proportion of infected people who end up in the hospital.

Even assuming those data sets are the most important ones — Abbott claims that’s what his medical advisors tell him, anyway — critics point out that the governor is working with incomplete info. Texas’ testing record ranks 47th in the nation. According to experts, that means it’s still unclear exactly how big a problem we have.

As of May 2, the state had tested 391,000 people, or just over 1% of its total population of 29 million, according to the independent COVID Tracking Project. That falls considerably short of the daily minimum of about 152 tests per 100,000 people the Harvard Global Health Institute’s recommends before states re-open their economies.

“The decisions already in place in cities and counties have, by and large, worked to slow the spread of the coronavirus,” Levy of the AFL-CIO said. “Local officials should not have to yield to an edict from on high based primarily on case counts when under-testing almost certainly means we do not have a true picture of the spread of COVID-19. Instead, local governments should be accorded the same discretion to roll out reopening plans that they had to enact distancing and other requirements.”

“It means that those interventions which worked to keep it at a lower level need to be maintained for a longer period of time,” he said. “Ultimately, if we stop doing those things or ignore the recommendations we put into place, we run the risk of bringing more and more people together in a quick amount of time. They could potentially pass the virus to each other and infect others, which would lead to a higher number of cases in a very rapid amount of time.”

However, other medical experts have a more brutal assessment of what lies ahead for states who reopen ahead of making significant gains in testing.

“I think they’re playing Russian roulette,’’ infectious disease expert Dr. John Swartzberg of the University of California-Berkeley told USA Today. “They’re hoping obviously that reopening the states is not going to lead to increased cases. They have no way of monitoring the answer to that question until it explodes.”

Under the rules, Texans who are at high risk or live with high-risk people, such as immunocompromised individuals or those over 65, can still receive unemployment benefits. Those who have been diagnosed with COVID-19, are in a 14-day quarantine or live in a household with someone who has tested positive can also continue to receive benefits.

What’s more, those who don’t have access to childcare due to school and day care closures can also continue drawing on unemployment benefits.
Any other case would be subject to a review by the Texas Workforce Commission “based on individual circumstances,” according to a news release from the state.

However, that eligibility expansion was announced days after Abbott’s announcement. By then, several news organizations had run stories speculating that people who didn’t head back to work might be dropped from the unemployment rolls.

In a statement, Texas Democratic Party spokesman said the delayed announcement was evidence that Abbott was rushing to reopen without adequate planning in place.

“Abbott’s overlooking of the elderly who can no longer seek unemployment benefits was yet another example of how he’s utterly mismanaged the crisis and botched the gradual reopening of Texas businesses,” Texas Democratic Party spokesman Abhi Rahman said in a statement. “If the decision to open the state prematurely wasn’t bad enough, Abbott proved again that he really had no plan.”

Worker advocates also say it remains to be seen how strict the state plans to be about the requirements. Where will it draw the line for people with borderline high blood pressure, for example, or those with concerns about other health conditions that may not be among the most obvious ones?