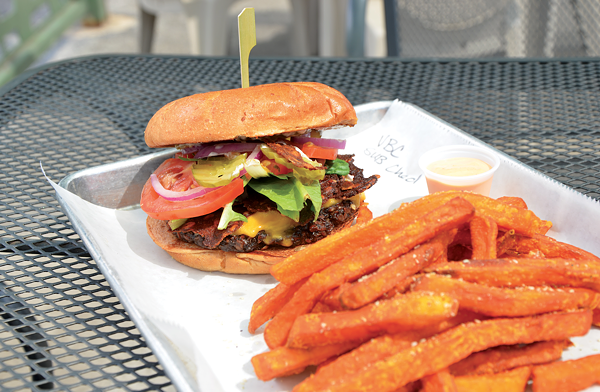 With so many esteemed chefs and award-winning restaurants in the Alamo City, residents understandably take pride when foodies from outside take note. And that’s been happening more and more lately, especially with the proliferation of cuisine-focused TV programs.

Food Network personality Guy Fieri, the Mayor of Flavortown, has visited San Antonio time and time again for his long-running Diners, Drive-Ins and Dives, but that’s not the only show to shine a light on our dining scene. Here’s a sampling of local restaurants that have landed national television coverage.

The Cove
As a restaurant and beer garden combined with a car wash and laundromat, the Cove is the kind of homespun oddity Fieri loves to feature. And it’s reportedly become one the host’s favorites, earning a spot on the show not once but twice. Fieri praised the Cove’s Latin-spiced lamb burger as its standout menu item. 606 W. Cypress St., (210) 227-2683, thecove.us.

Tycoon Flats
This Saint Mary’s strip favorite got a nod on Food Network’s Burgers, Brew & ‘Que — and not for being a go-to for sobering up after a night of bar hopping. Host Michael Symon included the restaurant on his “Brisket for Breakfast” episode, during which he showed off the signature fried-apple bacon burger, which is also dressed with blue cheese and grilled onions. 2926 N. St. Mary’s St., (210) 320-0819, tycoonflats.net.

The Granary ‘Cue & Brew
Naturally, on the first-ever episode of Eat, Sleep, BBQ, host and barbecue chef Rashad Jones came to Texas. Better yet, his Food Network show came to the Granary to see what’s up at the meatiest spot at the Pearl. Jones was exploring the many uses of brisket — which he regarded as the “king of BBQ” — and at the Granary, one of those uses is serving as the star of a slurp-worthy bowl of ramen noodles. 602 Avenue A, (210) 228-0124, thegranarysa.com.

Soluna
With so many Mexican restaurants within the Alamo City, how does one stand out? For Soluna, the answer is all in the salsa. Troy Johnson, the host of Food Network’s Crave, hit up the Broadway staple for the “Spicy Food: Taste the Pain” episode to sample its “extra-spicy” salsa made from a signature mix of hot peppers. 7959 Broadway, Suite 204, (210) 930-8070, solunasa.com.

Big Lou’s Pizza
Many remember when Big Lou’s gargantuan pies were featured on Travel Channel’s Man v. Food, but the East Side spot also made an appearance on the first-ever episode of the Food Network’s Ginormous Food with Josh Denny. Titled “Everything’s Bigger in Texas,” national viewers got to see Big Lou’s 62-inch pizza that’s as big as a table. 2048 S. WW White Rd., (210) 337-0707, biglouspizza-satx.com.

Fat Tummy Empanadas
During Fieri’s latest trip to the Alamo City, he visited a number of local spots — including Fat Tummy. The mom-and-pop spot made its national TV debut in December 2018, during which Fieri said husband and wife team Gustavo Plache and Norah Saleh were “the example of the American story.” With both sweet and meaty options available, the Argentinean restaurant’s signature empanadas can be found at its downtown location as well as a food truck. 2922 W. Commerce St., (210) 383-6415, fattummyempanadassa.com.