Green in a Glass: How a San Antonio brewery and winery are embracing sustainability 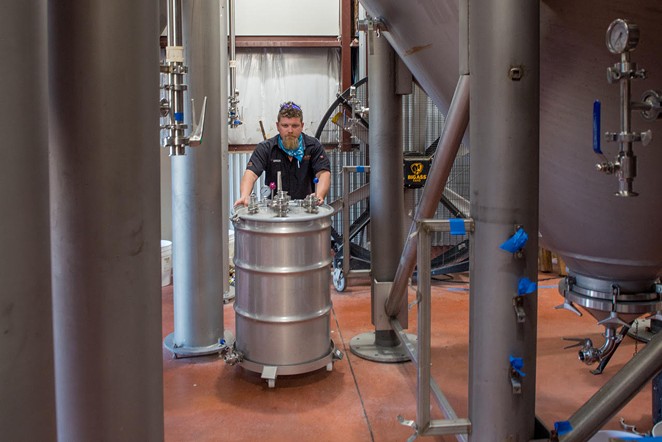 Courtesy of Alamo Beer Co.
Head brewer Gregg Spickler moves fermentation tanks which yield CO2 naturally as a byproduct of beer making.
Sustainability has been a buzzword in food circles for some time now — avoiding overfished seafood and choosing to serve local, seasonal crops, for example.

But that focus on ecological balance is about more than just what goes on diners’ plates. A growing number of breweries and wineries — including a couple in San Antonio — understand it also involves what goes into their glasses as well.

Along with a 256-module solar installation atop its roof, Alamo Beer early last year installed equipment to recapture carbon dioxide waste emitted during its brewing process. The technology allows the brewery to safely reuse the emissions to carbonate its collection of craft suds instead of venting the greenhouse gas into the air.

The recapture system was provided by Earthly Labs, an Austin-based business that’s been developing carbon dioxide-capture technology since 2016.

“Currently, 512 Brewing and Austin Beerworks are customers of ours, and the Austin Beer Garden Brewing Co. is a development partner of ours,” Earthly Labs CEO Amy George said. “But Alamo is among the first in the country ... using this tech at this scale.”

Yeast produces CO2 during the fermentation of beer, creating not just fizz but some of the characteristic flavors brew hounds crave.

At the same time, craft brewers use from 4 to 21 pounds of CO2 per barrel they produce, according to an Earthly Labs industry survey. They use the gas during canning, kegging and cleaning equipment — all crucial steps of the production process.

So, if breweries produce CO2 and also need it to carbonate their suds, the solution to eliminating waste emissions seems simple. Why aren’t more of them using technology to reclaim CO2?

“Really big breweries like Coors and Sierra Nevada have used this tech, so there is awareness, just not at the craft scale,” George said. “In the early days [of Earthly Labs], craft brewers would pass right by my trade show booth, thinking this tech is a million dollars, just thinking they can’t afford it.” 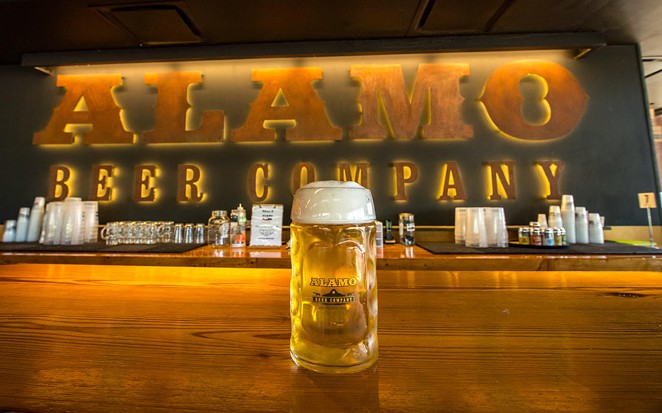 Courtesy of Alamo Beer Co.
Indeed, the installation of CO2 recapture equipment also seems like it might be an engineering feat beyond small-scale beer producers. But George says Earthly Labs’ system is a plug-and-play solution created specifically for breweries.

Using carbon capture science originally designed by NASA, Earthly Labs’ CiCi — that’s short for “carbon capture” — collects, purifies and liquefies CO2. The gas can then be put back into the brewing process, potentially slashing monthly CO2 expenses by 50-100% and cutting emissions in half.

“At this point, we’re producing about half of our CO2 needs, though I think we can do better,” Alamo Beer Brewmaster Gregg Spickler said. “It’s taken us longer to get it up and running just because of the ebbs and flows during the pandemic, but recently we’ve had some steady production, and we’ve been able to see what the system can really do. With a little bit of extra storage on our part, I think we’ll be able to produce all of our CO2 if we can dial it in.”

Alamo Beer produces some 10,000 barrels annually, so the emissions reductions and savings add up. Beyond its environmental impact, Spickler says the recaptured CO2 produces a noticeably better product.

“We like the product we’re getting with this tech,” he said. “We think it has a better mouthfeel, definitely a better quality. And we’re so proud that we’re doing our part to help the environment by reusing something we were producing anyway.”

Hemisfair winery and tasting room Re:Rooted 210 is taking a slightly different approach to reducing its ecological footprint. The business exclusively sells Texas wine, serving it via a draft system. To reduce waste, it only uses kegs made with 100% post-consumer recycled content.

Beyond that, it sells its vino by the glass or in reusable steel and glass growlers, which not only reduces spoilage but also limits glass and cork packaging waste.

“Sixty-seven percent of the bottles that are opened in a tasting room get thrown away,” said Jennifer Beckmann, Re:Rooted 210’s owner. “It just makes no sense to continue to be a part of that cycle.”

Another bonus of the Petainer brand of recycled plastic kegs at Re:Rooted 210 is that they’re 90% lighter than their traditional steel counterparts, cutting transportation costs along with the venue’s carbon footprint.

“We’re able to reduce our environmental impact in general, which is not only important to us, but important to our core clientele as well,” Beckmann said. “People seem to enjoy doing their part, even if it’s a seemingly small bi-weekly change they’re making.”

Re:Rooted 210 opened in the midst of the coronavirus pandemic, and Beckmann believes brand loyalty helped her business thrive through what could have been a bleak startup period. While most of that comes down to customers enjoying the wine, the space and the vibe, she said guests also appreciate her business’ commitment to sustainability.

To Beckmann’s point, Amy George — Earthly Labs CEO — has seen proof that folks are more apt to support a business if they know that brand is taking care of their community, employees and environment.

“We’ve seen data from a national survey done by a professor at Indiana University where she determined that craft beer consumers are generally pretty green and are willing to pay a premium for beer that is sustainably produced,” George said. “While most of our customers don’t increase their price after we install the tech, we still see the velocity of their sales go up when they communicate their environmentally conscious story to their consumer.”