Group set to capitalize on apparitions at Yorktown Hospital 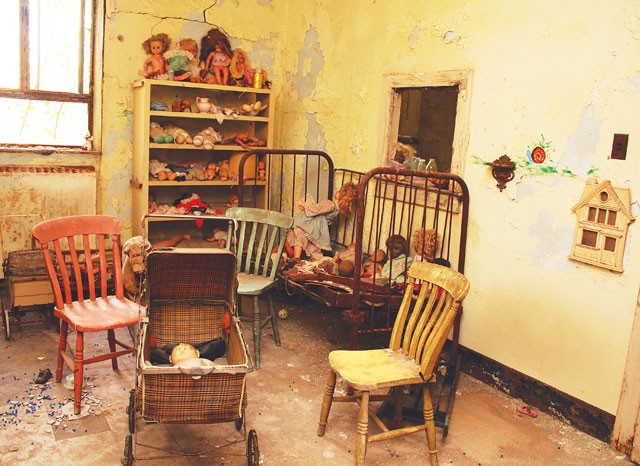 Laura Ontiveros
Don’t go in there: a (possibly) haunted nursery in Yorktown Hospital. Inset: one of YH’s many eerie hallways.

YORKTOWN, Texas — The idea of a haunted hospital conjures up waves of dread — and not just for those still-too-recent memories of Andrew McCarthy’s performance in that Kingdom Hospital mini-series. Hospitals, with their antiseptic instruments, organ trays, and limbo-like waiting rooms, are already scary enough. But Yorktown Memorial, started up by concerned nuns in 1950 before transitioning into a drug rehab center for about a year in 1989 (whereupon its basement became the site of a double murder) has enough bad vibes to spook even the most spectrally hardened. Just check out the Travel Channel’s Ghost Adventures clips of the place. Or, better yet, talk to those who now own and operate it as a site dedicated to ghost tourism.

San Antonio attorney and real estate broker Phil Ross bought the place, he says, as a potential warehouse, but soon realized the building had other things in mind. Ross, who by his own admission never gave much thought to his spiritual life, sees the ongoing investigations there — led by a “spirit team” of area enthusiasts — as a form of entertainment. “Ghost hunting brings in a little income to help cover the overhead expenses,” Ross said. “And it draws attention.”

When he heard of the property’s reputation for spectral goings-on, he asked Angelika Rogers, a 36-year old woman who used to give ghost tours at San Antonio’s Black Swan Inn, to size it up for potential tours. Rogers went in with a team of psychics, and she and several others felt as if they were being choked by unseen hands, she said. Another “had to step outside and collect herself, the energy was so intense,” she added. “She saw all sorts of violent imagery and disturbing things.”

Jo Ann Marks-Rivera, who runs the Black Swan and isn’t particularly frightened by the spirits, says hauntings typically are expressions of the way the people died, that most are only trying to express themselves in their states of unrest. Of a trip to Yorktown, Marks-Rivera said: “One of them kept telling us to ‘Get the fuck out of here,’ but when we talked to him we understood that he was trying to warn us. He had been butchered by a ‘Dr. Nowierski’ during a thyroid operation and was trying to help us out, keep us safe.”

In subsequent excursions group members say they also encountered the spirit of the doctor who worked at Yorktown for decades, as well as a wheezing ghost of a person who they said had died of emphysema. “I was a total skeptic,” said Nancy Lupolt, the oldest member of a small “spirit team,” one of several ghost hunting groups that make regular visits to the hospital to ask questions to the dead. She says she has seen and heard weird things, including apparitions and lights, and even communed with her late husband. Now she has feelings of emerging psychic abilities, and regularly travels outside her body, even claiming to hitch rides with top Washington, D.C., insiders in their convertibles.

Since opening up to the spirits of Yorktown, Rogers also said she has been in steady contact with the spirits, even claiming to have spoken to her with dead husband Shawn, who was murdered in 2005. Surprised by nothing now, Rogers likens the Yorktown experience to that TV show “True Blood,” wherein there is a new cast of creatures every week.

So far, the city of Yorktown has not allowed the site to be commercialized (there are no utilities, therefore it’s not up to “code”). According to Mike Henson, the groundskeeper, potential ghost hunters enter at their own risk. After arrangements to visit the decrepit hospital are made, he opens the doors for interested parties and lets them do their own thing.

In his own particular brand of understatement, Ross said Yorktown is “a great old building, full of stories and intrigue.” To get an inside peek, you have to make an appointment. •