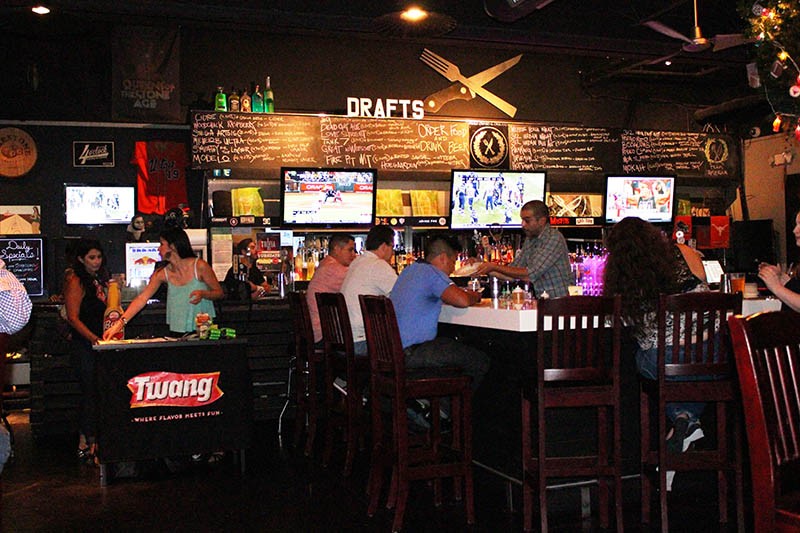 When I decided to visit Knife & Fork for this Happy Hour review, I did so with a heavy heart. The last time I had been in the eccentric gastropub, the Spurs treated me to a gut-wrenching game six collapse in the 2012-13 Finals. They never recovered, losing in game seven, and I never returned.

That was, however, before world-renowned chef Robert Irvine and the crew of Restaurant Impossible swept into town and exorcised those playoff demons. The Spurs have since gotten their revenge, and Knife & Fork has gone through a bit of a metamorphosis.

There is still an abundance of art doting the walls (pop art and music memorabilia) adding an air of sophistication, and the expansive square bar is still the centerpiece. Overall, there is a fun, fresh vibe, particularly on the enormous outdoor patio — summertime Happy Hour just got a new super star. Piping through the robust house speaker system is a mixture of folk, old school rock and EDM.

The staff was friendly and attentive but never obnoxious. They were knowledgeable and quick to point out the drink specials: $2 off domestic bottles, $1 off drafts, $4 house wine, $5 specialty cocktails and $3 wells available Monday through Friday from 4 to 7 p.m. For whatever reason, the place was absolutely dead during my visit last week. But it's an established go-to spot for Monday Night Football and Spurs games, so I doubt that they're dead too often.

Though not overwhelming, they have a commendable selection of local and micro brews, including our very own Freetail Brewery – with Soul Doubt on tap – and Houston's Karbach Brewery. Other notable beers on tap include the ever-popular Karbach Hopadillo and Sympathy for the Lager, Freetail Witicus and Fire Pit Wit. Beer enthusiasts will feel right at home. Though there are no liquors of the exceptional variety, all the favorites are there. Keeping with the recent cocktail craze, they even offer a homemade variety of mules.

The food menu isn't overly sophisticated, but during happy hour, the half-off appetizers and massive portions assure you won't leave hungry. Unfortunately, while reading, I wondered exactly how much influence Chef Irvine really had. I opted for the parmesan and herb-truffled fries to start. They were heavily salted, to be expected, but the truffle and parmesan had a great balance.

The Restaurant Impossible makeover may have done away with those Spurs demons, but it didn't steal Knife & Fork's soul. This is still a great place to gather, particularly in large groups, and enjoy a sophisticated craft beer selection and some serious bar nosh. When the weather warms up, the patio will be prime real estate – I'll be buying.