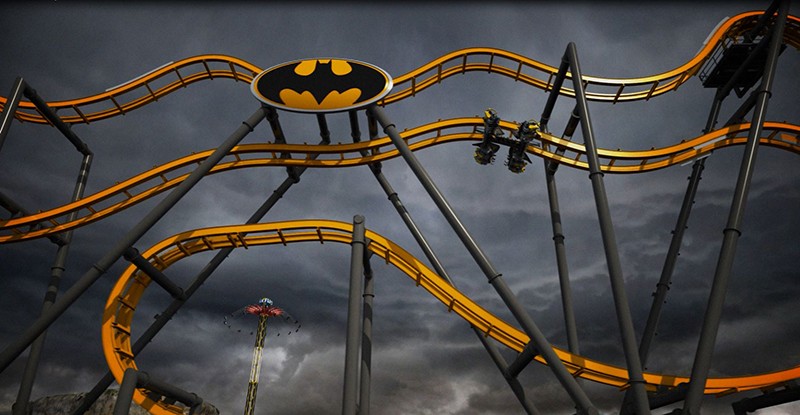 Six Flags Fiesta Texas' newest thrill ride may carry the Batman name, but just one go on this crazy contraption will have you thinking of The Joker. That's because the Gotham City-themed attraction is the villain's predilection for anarchy and chaos in rollercoaster form.

Announced late last summer to great fanfare with a stomach-turning animated YouTube video, Batman: The Ride, the park's eighth roller coaster, finally opened to the public last week. If you haven't been to Fiesta Texas in a while, be sure to ride this thing at least once this summer, and after you do, it's likely you'll want to come back. Why? Because this is not your regular rollercoaster ride.

The park is billing it as the world's first "4D wing" coaster. Cars are attached to the track on the side, rather than above and below, enabling a 360-degree, free-flying, weightless experience. The track may not have the usual loops and sharp, angled banks to visually entice thrill-seekers, but don't let the straightforward, innocuous grey and yellow steel frame fool you. This coaster delivers nothing but adrenaline-pumping, disorienting mayhem.

The 120-foot tall coaster features six head-over-heels flips facilitated by first-of-its-kind magnetic, on-board technology and two beyond-90-degree drops. As one of the fortunate people able to ride the coaster before its public opening, I can attest to this: For a brief two seconds I thought I was going to die thanks to gravity and one of those aforementioned drops. The rest of the time, I didn't know what the hell was going on. And I mean that in a good way.

Batman: The Ride begins with a slow, 12-story elevator lift to the top of the track, giving you view of the Rockville area of the park and the Superman: Krypton Coaster straight ahead. Enjoy that view, because once the ride begins in earnest, you won't able to discern much of anything else.

The attraction delivers roughly a minute of rough-and-tumble mayhem — without the rough part. The track is remarkably smooth considering how many times the ride flips and flops you a full 360 degrees. While on-board, you face other riders — in my case, fellow San Antonio Current co-workers — giving you plenty of opportunity to show off your very best "I'm about to crap my pants" face. When we dizzily disembarked, I turned to my co-worker and asked, "What the hell just happened?" Then we wondered when we could get on it again.

Ride the Iron Rattler and Superman: Krypton Coaster enough times, and you get to know each coaster's jostles, banks and turns. But the new Batman: The Ride tops Fiesta Texas' other marquee attractions because it delivers a unique topsy-turvy experience. Riders will never know what to expect. Brief as it is, this one's worth the hype.