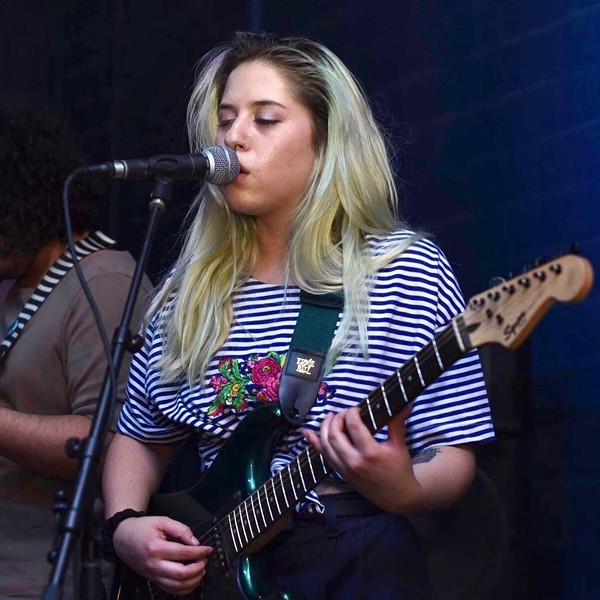 Rey Lopez
Echoing the dreamy, melancholy-pop tones of her previous work, Elena Lopez returns with her first full-length effort, Topics. Holy shit, it has been worth the wait.

If you’re unfamiliar with Lopez and her role in the San Antonio music scene, let’s catch you up:

Lopez loved to sing as a kid, and her parents enrolled her in classical piano lessons at only 4 years old. She liked piano so much she continued taking lessons for nine years.

At 12, the pianist – who also sings and plays several other instruments – took her skills to Bandera Road City Church, where she grew as a musician and developed communication skills by working with other artists. Eventually, she left the church band to focus on her own musical endeavors. Lopez’s band Octahedron (who have been on hiatus since 2016) saw regional success, along with her side project Baby Bangs – a fuzzier, grunge/punk turn from the straight-forward indie rock sound of Octahedron.

Today, Lopez’s focus is Elnuh, a surf-y, dream-garage outfit whose tracks sometimes have melancholy vibes despite the poppy vocal melodies that punctuate her songs. “Like, in the middle of night, what kind of music am I writing when I can’t fall asleep? That’s Elnuh,” Lopez said.

Lopez’s lush vocals float over her fuzzy guitar progressions: a recipe for the perfect afternoon nap in a park, a THC-fueled bike ride around Southtown or a 3 a.m. painting or coloring book session.

Elnuh is releasing Topics on Saturday, May 19 and launching a tour out west that same weekend.

Lopez was kind enough to send an unmixed version of Topics since it’s still in production, and we’ll just say, if it’s sounding this good already, we’re pretty stoked to hear the final version. The latest effort from Elnuh isn’t a drastic step away from her general sleepy vibes. In fact, Lopez sounds like she’s swimming deeper into the ethereal space where her slow-breathing guitar progressions live. On “City of Oz,” for instance, the singer-songwriter layers vocal harmonies with soft, spiraling keyboard pads, pulling listeners through a crystal cavern of echoes as a steady bass line jumps around, giving the track shape and definition.

Lopez said most of the songs are well over a year old, and that each track is about going through change in different seasons of her life and what she’s learned in her relationship with people. “Relationships with bandmates, family, and even with myself – a lot of these songs are even odes to myself, and also reflecting a lot on my life growing up and realizing certain things and reflecting on things that have brought me from point a to point b,” Lopez said. These songs are about “very specific things [that] were happening, and I’d write these songs [as a] way to get through what was going on [at that time]. That’s where the idea of Topics all came from, they were all about very specific ... topics.”

On one of the tracks, there’s a clip of her and her brother Ruben talking when they were children.

“[My music] is very personal,” Lopez said. “Something I hear all the time is, ‘Oh, I’m gonna go to an Elnuh show and cry a lot.’” She laughed. “People tell me that, or, ‘Your music makes me cry but it feels so good,’ and me, too – sometimes I’ll cry too. So my music is very personal. I don’t know how not to be personal.”

Topics feels like an inside look at an artist processing her pain and joy through a collection of songs that’s unabashedly personal and introspective.

Lopez and her band will be joined by indie rockers Booty Feet, who released a split EP with Elnuh last year aptly titled The Split, along with Slomobile and Baldemar for the Topics release show, which is also serving as a tour kick off show for Elnuh and Booty Feet. The bands will head west for a week and play shows along the way to California before returning to SA.

Listen to "Shame" the first track released from the Topics.