How Rare Was the Spurs' 30-Point Loss to the Warriors?

Getty Images
Manu Ginobili and the Spurs don't often lose by 30 or more.
We don’t need to rehash the gory details of last night’s 120-90 Spurs loss to the Golden State Warriors. It was bad — but not so bad that Coach Gregg Popovich couldn't maintain a sense of gallows humor about the debacle:

Popovich: "I'm glad my general manager wasn't in my locker room or I might've gotten fired."

Maybe the reason Popovich can joke about the game is because a blowout of this magnitude happens so seldom to the Spurs. Since Popovich's first full season as the Spurs' head coach, the team has only lost by 30 or more points seven times.

It's happened about once every 200 games under Popovich's watch, and all such losses have come on the road. The Spurs have avoided a 30-point loss in 12 of the seasons that Popovich has coached the team. And even in the seasons when such losses did happen, the Spurs still won at least 50 games.

Here are quick recaps of the six other times a Popovich Spurs squad has lost by 30 or more points:

The Rockets, then featuring Charles Barkley, Clyde Drexler and Mario Elie, handed the Spurs a pre-Big 3 beatdown in Duncan's rookie season. Though the Spurs' squad featured three future head coaches (Avery Johnson, Vinny Del Negro and Monty Williams), they wilted against a typically soft Rockets defense which rated as the association's 25th-best that season. The game can best be described thusly:

The last game of the season pitted the Spurs against the Patrick Ewing-led SuperSonics (what a strange sentence to write. The game was a classic season-ender for Popovich: With the Western Conference's best record locked up, Popovich let the Spurs' reserves soak up most of the minutes in a meaningless game. David Robinson didn't suit up, and neither Sean Elliott nor Duncan played more than 20 minutes.

A Duncan-less Spurs never stood a chance against their division rival. The Spurs only made two shots in the third quarter, and they were both directly underneath the basket: 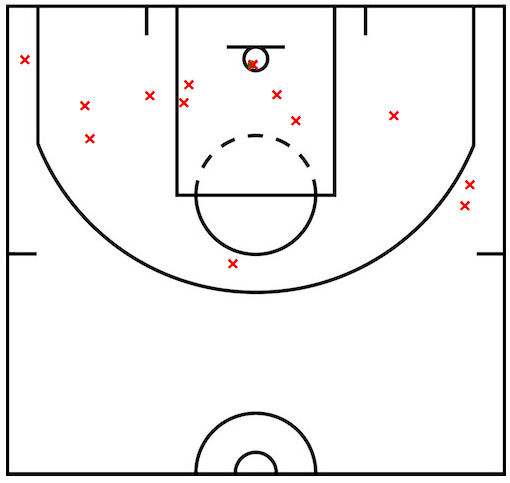 basketball-reference.com
The Spurs' third quarter shot chart from their April 7, 2005 game against Dallas. The X's are misses. There are lots of X's.
The loss clearly didn't weigh too heavily on the Silver and Black. The Spurs ended up winning the championship that season.

The Heat avenged a 30-point loss to the Spurs they suffered on March 4. But otherwise, there are few excuses for this one, which came in the first year that LeBron James, Chris Bosh and Dwyane Wade played together in Miami. Here are the full lowlights:

That journeymen James Anderson and Eric Dawson each logged over 30 minutes in this game tells you all you need to know. Popovich rested the entire Big Three, and the LaMarcus Aldridge-led Trail Blazers acted accordingly:

Another game in which the Spurs missed a member of the Big Three (are you noticing a trend?) — this time with
point guard Tony Parker sitting out with an ankle injury. No team has ever scored as many points against the Spurs in the AT&T Center as the Trail Blazers did in this game.