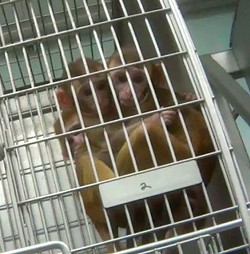 An HSUS investigator documented a pattern of mistreatment of primates at Texas Biomed, a taxpayer-funded institution. Photo: The HSUS Earlier this summer, the United States Department of Agriculture criticized the San Antonio-based Texas Biomedical Research Institute after a routine inspection of the facility, particularly because of how the institute handled the deaths of a young male baboon and an attack on an adult female rhesus. In a blog post, president and CEO of the Humane Society of the United States announced Monday that one of its investigators went undercover at Texas Biomedical Research Institute that resulted in a citation from the USDA. “The investigation occurred last year, and at that time we provided findings to federal authorities,” Wayne Pacelle wrote. “The U.S. Department of Agriculture has taken action and cited the lab for violations of the Animal Welfare Act based on our investigation.” Pacelle wrote that the Texas Biomedical Research Institute, a taxpayer-funded institution, houses more than 3,000 primates for research, and after a little more than a month of investigation, the HSUS investigator documented how the “primates live in overcrowded and barren conditions, mothers and infants separated, and injured and sick animals not receiving timely medical care.” The USDA routine inspection report echoes those criticisms. According to that report, the young male baboon, unceremoniously named 30938, died from septicemia from trauma wounds, which occurs from bacteria and germs cause infection. The baboon’s last health check in late October of 2013, approximately 3 weeks before its death, showed it had a clean health check and was in good condition. The baboon was then moved to a new enclosure, which housed a large number of male baboons. “Daily observational logs during this time period do not document an animal with wounds. They do not indicate any behavioral observation of the newly introduced animal for acceptance into the group. The necropsy report states the animal was emaciated at time of death and had multiple scabs from bite wounds on the body and a large abscess on the leg and ankle,” the USDA inspection report states. The female rhesus, named 29458, was also placed into a newly formed group of rhesus monkeys in March 2013, before it was attacked so viciously that part of its tail was torn from its body. “On October 30, 2013 the animal was involved in a second traumatic episode and sustained injuries that included multiple lacerations to the face and body. A portion of the tail was also amputated during the altercation. A staff veterinarian stated during this inspection that the injuries were severe enough to warrant assessment of the group by the facility behavior team. There is no documentation that any behavior assessment of the individual or group was performed post injury,” the inspection report states.
click to enlarge 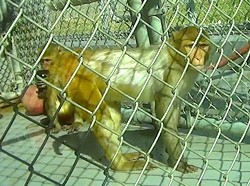 An HSUS investigator documented a pattern of mistreatment of primates at Texas Biomed, a taxpayer-funded institution. Photo: The HSUS Additionally, the USDA inspector said Texas Biomedical's 2013 annual report did not accurately report how many animals involved in studies that experienced pain or distress “did not receive anesthetic, analgesics or tranquilizing drugs as the administration of such would have adversely affected the results of the project.” The USDA inspection report directed Texas Biomedical to amend and resubmit its report to include an accurate count of those numbers, and instructs Texas Biomedical to observe animals daily and also to observe newly introduced animals for adjustment issues, along with identifying animals with trauma wounds and intervene. “Primates suffer immensely when confined in research labs, and exacerbating those problems through neglect and mistreatment is simply wrong,” Pacelle wrote. “It is time for our nation to move beyond using these highly intelligent, social animals for these purposes.” Pacelle goes on to ask people to write to the USDA, urging the agency to take strong enforcement action. “We are also asking that the government retire the 22 federally-owned chimpanzees currently at Texas Biomed to sanctuary as soon as possible,” Pacelle wrote. The San Antonio Express News reported in July that Texas Biomed took corrective action based on the USDA inspection. Texas Biomed President Kenneth Trevett told the paper that the institute “has had a long-standing commitment to treating its animals humanely and with the highest regard for their well-being.”