"I Was a Bit Bored": An "Exorcist" Review From the Short Attention Span Generation 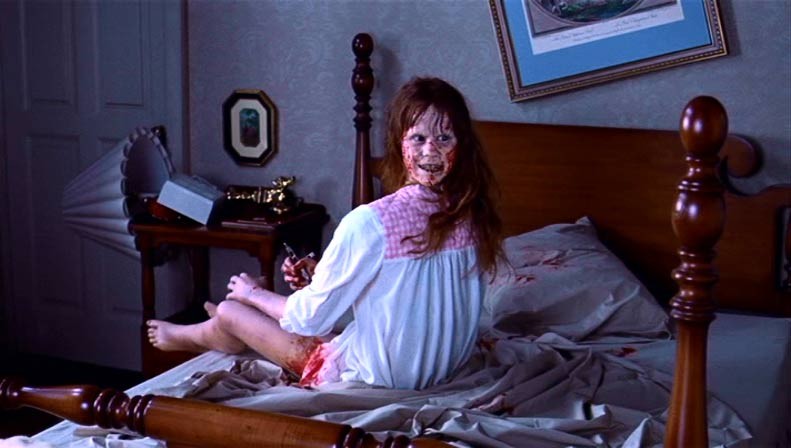 *SPOILERS AHEAD, BEWARE!* Lt. Kinderman said it best in The Exorcist (1973) when he referenced Regan’s possible possession as a “subconscious rebellion.” I was born in 1990 and had only seen a few parts of the film because of its popularity from having been the most scary movie in its heyday in 1973. Inevitably, I have seen the infamous scenes of little Regan crawling down her mother’s stairs and her head turning around completely as a show of the evil entity’s illustrious power.

Finally, I had the amazing opportunity to sit through the entire film during Texas Public Radio’s Cinema Tuesday’s Halloween special this past Tuesday and truthfully, I have mixed feelings about it. I can appreciate the work that went into presenting a supernatural film using “special” effects that weren’t available at the time. The intense acting from Ellen Burstyn who played Regan’s mother as Chris MacNeil deeply impressed me. Most of the film relied on her skills to artfully portray a distressed mother who was doing everything she could to find a treatment for her daughter.

Don’t be fooled! I am certainly no expert film critic but viewing this film as a young person who has grown up watching all of the sequels of Hellraiser (1987) and Nightmare on Elm Street (1984); I was a bit bored. I impatiently waited for random car crashes, more objects flying around the room and visually horrific deaths. Maybe I would have been satisfied if the director had allowed us to see how Burke Dennings or Father Merrin died by the hands of possessed Regan. Having said this, the scariest part of the film was the silence.

The silence was unbearably long! There was no warning something terrible was about to happen. There was no guidance on how we should react to what was unfolding in front of us on the screen. We were left alone to determine how frightened we should be. As possessed Regan screamed and cursed in her seizure-like fashion, the noise of her gargled screams were loud and disconcerting. I wanted it to end.

I can admit that as a young person, my attention span is a lot shorter. I did appreciate the ability to catch all of the foreshadowing and references to society’s Christian beliefs because of the gradual progression of the film. Usually, I am too distracted in today’s horror films to worry about the details. During the screening of the film, a question was posed to the audience, “Who has never seen this film before?” My neighbors to my right stared at me in wonder as I raised my hand and I realized I was about to witness a film that has made history. The Exorcist set the precedent for the many exorcism movies that exist today including some of my favorites: The Exorcism of Emily Rose (2005) and The Last Exorcism (2010). This film was one of the few films that jump started a whole new era of films that would contradict society’s norms of appropriate language and for that I am grateful.