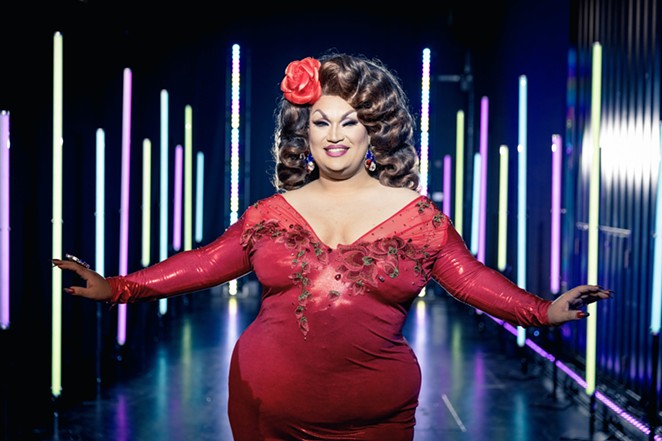 Paramount+
After making her break on American Idol in 2018, Ada Vox is now competing on the new series Queen of the Universe.
Ada Vox, the drag queen who grabbed the national spotlight by finishing in the top eight on the 2018 season of American Idol, is back.

First, she’s back in her native San Antonio. Following her break on Idol, the South San High School grad relocated to Hollywood to build on her career, but the tough realities of the pandemic brought her back home this fall.

Beyond that, though, she’s back on TV. Vox is one of 14 international drag performers on the RuPaul-produced series Queen of the Universe, where she’s competing for a $250,000 prize. The inaugural season of the Paramount+ series kicked off Dec. 2, and new episodes air every Thursday.

We called Vox to talk about the show and her work to build a singing career that transcends competition shows.

In the bio I received, it says your presence on the Queen of the Universe offers “a chance to get the redemption she’s seeking.” What redemption is that? A redemption for not going all the way on Idol?

I guess you could say so. I guess, it’s more in terms of getting the redemption of not just being some token LGBT or drag person on a TV show that catered to Middle America, and actually getting to come back and truly show the real me.

Lip syncing is a more common form of drag performance than actual singing, and Queen of the Universe is being billed as the first singing competition for drag performers. How much credit do you give your turn on Idol for making this new series possible?

I don’t think I can take an abundance of credit, but … I think I was to some extent a factor in them realizing that it would be beneficial for there to be a space. And that there is a market for people like myself in the industry.

How familiar are you with the other performers you’ll be competing against?

Well, as many people may know, singing drag queens are not exactly at every street corner. We’re a little harder to find. I believe about half the cast has been successful on other television shows. You know who they are in the community. I went in knowing people — Lagoona Bloo, Leona Winter and of course Jujubee. All of us that have been on TV shows before and are partially or wholly known for singing. So, when I went in, I saw those faces and I said, “OK, this is going to get real good.” Because I know that these girls are very well known, very successful and very talented in their own rights.

I firmly believe that I am great at what I do. And I don’t let myself get intimidated by other people because I’m fully aware of my skillset. I know what I’m capable of in every aspect of what I do. And I know that I also always have room to grow. So, instead of being intimidated or worried about the competition, I look at all of it as an experience to learn and to just put my best foot forward no matter what. No matter how anyone else is doing. It’s my show. And I keep saying, “I am there to compete with myself and nobody else.” And that mindset has kept me very levelheaded in not being concerned or letting the competition aspect get to me.

Back when you talked to us in 2019, you were developing songwriting partnerships and doing some recording. How’s that going? Are there releases people can check out?

Well, I do actually have three singles released, but there was a problem, and her name was Coronavirus. I had moved to Los Angeles, and I was in the process of lining things up to record my first album. To record music videos. To start a talk show. To do all kinds of wonderful things to take a big step forward in my career. But I was doing that all right around that February-March period [of 2020] and getting it situated for the summer. When the pandemic hit that March, it started canceling all my tours. Started canceling everything. We were on lockdown. So, when that all happened, everything just completely flatlined for me, unfortunately. So, now I’m having to rebuild back from ground zero, and then Queen of the Universe showed itself to me. And I said, “You know what? I think this is the reawakening for me to really focus again and move forward with the things I had originally planned.”

What do you ultimately see as your goal as a musical performer?

I want to be a successful mainstream artist, and I want to be releasing music that allows me to sell out arenas around the world. I want to be someone who sings a James Bond theme song. I want to be considered, potentially, the voice of my generation. There are so many things that I want to do musically, and I see big things for myself. These competition shows are a step ladder to help me get where I need to go.