Just in case viewers of the recently released original Netflix true-crime drama Extremely Wicked, Shockingly Evil, and Vile were unaware that serial killer and rapist Ted Bundy was considered to be easy on the eyes, Oscar-nominated documentarian Joe Berlinger (Paradise Lost 3: Purgatory) seems to want to remind everyone of the celebrity status Bundy received four decades ago.

It’s unfortunate that Berlinger, whose only other feature narrative of his career was the unwatchable 2000 horror sequel Book of Shadows: Blair Witch 2, decides to glamorize the monster who confessed to murdering at least 30 women across seven states in the 1970s. In Extremely Wicked, we’re not sure how many times a female character rubbernecks when Bundy walks by, but Berlinger definitely tops the sexual overtones when he includes a scene where the self-described “cold-hearted son of a bitch” flashes his six-pack in prison.

Who better to expose his rock-hard abs and shed the last of his remaining goody-goody persona than former Disney star Zac Efron (Baywatch)? (Remember, Nicole Kidman actually peed on him in 2012’s The Paperboy, folks, so High School Musical 4 is probably not in his future anyway). Efron does a serviceable job as the charming and sadistic Bundy, who did grotesque and unspeakable things to his victims, but Berlinger and first-time screenwriter Michael Werwie keep audiences at arm’s length at all times. 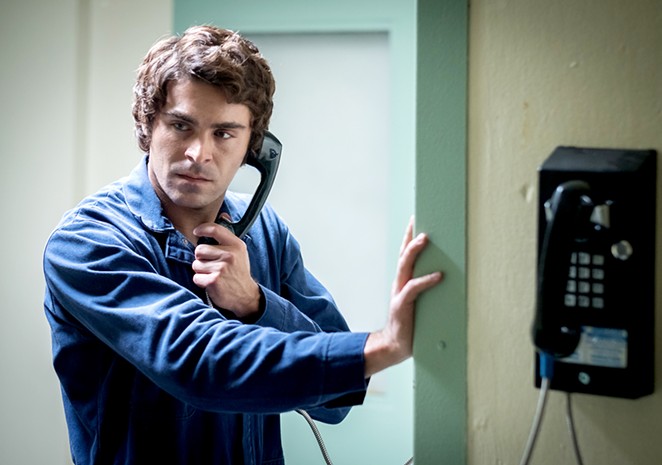 Adapted from the novel The Phantom Prince: My Life with Ted Bundy by Bundy’s ex-girlfriend Liz Kendall, Extremely Wicked tells Bundy’s tale from the perspective of Liz (Lily Collins), a single mother who ends up meeting and falling in love with Bundy in Seattle in the late 1960s. To Liz, Bundy was the perfect man — a handsome, aspiring lawyer who treated her young daughter like his own.

So, it comes as a shock to her when Bundy is arrested in 1975 and ultimately charged with aggravated kidnapping. Later, homicide detectives from other states begin to find commonalities between Bundy and their departments’ open murder cases. None of this is really explained in any great detail in Extremely Wicked. Instead, Berlinger focuses most of the scenes on Bundy maintaining his innocence and Liz struggling with the realization that he committed the heinous crimes.

Berlinger, however, presents everything in such a piecemeal manner, unless viewers are well versed in Bundy’s history, Extremely Wicked feels insignificant and obscene, which is odd since the film doesn’t play out like other real-life, serial killer features, including 2002’s Dahmer or 2004’s Monster. Bundy’s atrocities aren’t at the center of the story, so let’s be clear that the murders themselves aren’t being covered in Hollywood sheen. Rather, it’s Bundy who has rediscovered how to command an audience’s morbid curiosity after all these years.

Extremely Wicked, Shockingly Evil, and Vile debuted on Netflix on May 3.