If Spaceballs 2 Materializes, Rick Moranis is Willing to Don the Dark Helm Once More 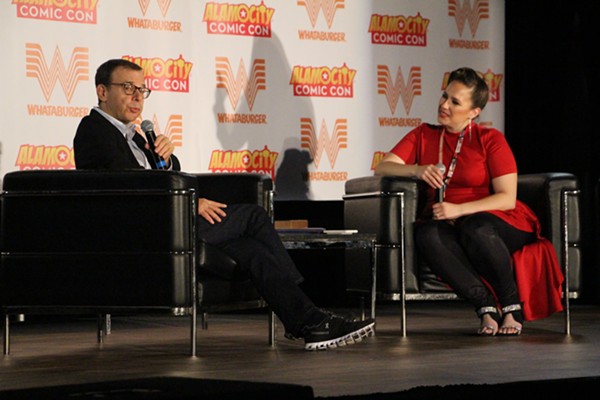 Rick Moranis may have been out of sight for the past two decades, but he certainly hasn’t been out of mind. While he kept his Alamo City Comic Con panel relatively low key, fans were able to eke some juicy tidbits about which of his roles may (or may not) return to the spotlight along with him.

When asked if he would jump onboard a sequel to Spaceballs, Moranis quickly replied, “I hope so!”

He described his experience filming the original as “like summer camp.”

Regarding the potential for the sequel, he went on to say: “I would love to work with [Brooks] again – it was that much fun – so, I guess all the cards have to fall into place, somehow. It has to be able to be budgeted properly and, you know, these are not easy things to pull off, but [Brooks is] trying really hard, and we’ll see what happens.”

Moranis already reprised his Spaceballs role this year during a cameo in ABC’s The Goldbergs, so it’s no surprise that he’d be willing to return to play Dark Helmet in a more substantial way.

Although Brooks has teased the idea of a Spaceballs return for a few years, it has yet to move beyond purported “talks” with MGM. Moranis noted that while Brooks is now in his nineties, “he’s in great shape and as funny as ever, and it may happen, we’ll see.”

While he and Dave Thomas recently brought back Strange Brew brothers Bob and Doug McKenzie for a charity event, Moranis doubts that they will reprise the characters again.

Part of the problem is that Thomas and Moranis live three thousand miles apart, but he also added, “I don’t know who those characters would be now.”

It doesn’t help that “at least one of us is a pretty crotchety curmudgeon…no, both of us are.”

When asked if he had seen Paul Feig’s Ghostbusters reboot, Moranis confessed that he hasn’t watched it. Don’t mistake this for a boycott, though – he just doesn’t watch movies very often, and is picky about what he does choose to view.

However, he did admit that he’ll periodically plop in front of a screen: “I like the odd documentary, or if something catches my fancy I’ll go see it, or in a forced double date situation I’ll go see something, but I might duck out after the first half hour.”

When moderator Renée Hinojosa Valadez ribbed Moranis on the upped likelihood of “forced double date situations” in the future, his girlfriend quipped, “thank you!” from the audience.

On His So-Called “Return”

While the media and fans alike have made quite the to-do of Moranis’s return to the spotlight, he doesn’t quite see it that way: “I’ve been the same all these years – I’ve just had smaller audiences, like whoever’s in my kitchen.”

Anyhow, it’s not like he stopped working while he was out of the public eye. He noted that the more niche projects he completed in the past decade were “as joyful to create and as gratifying to get feedback on as anything else I’ve done, and in some cases more, because it was homemade kind of cottage industry stuff.”

For fans who were sad to miss out on his limited ACCC appearance, don’t fret – Moranis has been quite impressed by his first con experience, so there’s every chance that we’ll see him at more events like this in the future.