Is This Thing On?: Local Stand-ups are Working to Cultivate a Relevant Comedy Scene in San Antonio, But is Anybody Listening? 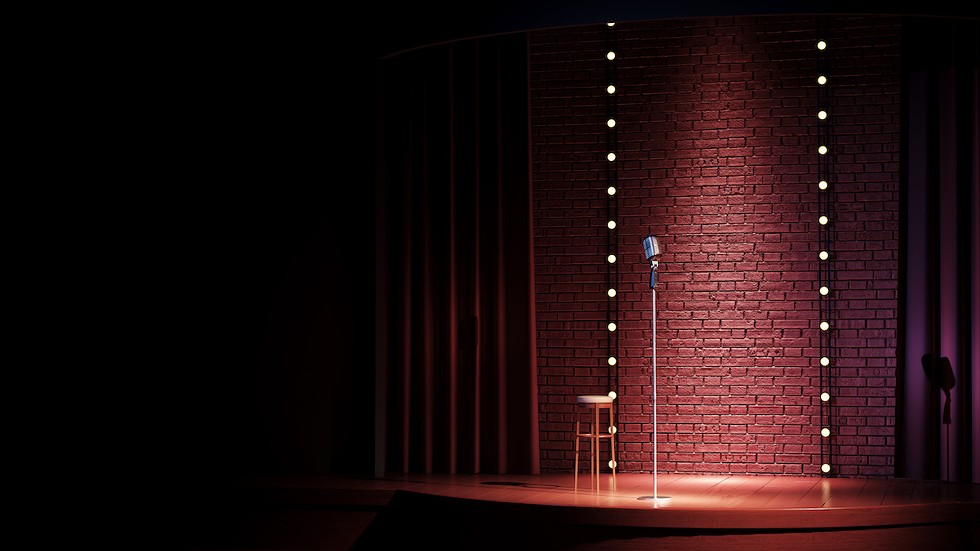 Shutterstock
It’s past midnight inside the Blind Tiger, a tiny club in the basement of the Magic Time Machine Restaurant, and a dozen comedians from San Antonio and Austin are delivering rapid-fire sets on the small, makeshift stage.

About 30 people huddle in the dark, crackerjack box-sized room, taking in the weekly Friday-night showcase. A teal-colored blanket hangs as a backdrop to the stage and also hides the door for the emergency exit. As more audience members trickle in, one of the comedians drags out extra velvet-upholstered chairs and lines them up tightly against the back wall.

During the 90-minute show, local comedian Tori Pool introduces each performer and times their sets. Some comics kill. Others receive sporadic laughter.

Most importantly, though, audiences leave the Blind Tiger knowing they experienced something they couldn’t find anywhere else in San Antonio.

“Every time I walk down those stairs, it feels like I’m going into a church,” said Blind Tiger regular Jeff Clements, who’s attended since the shows began in 2012. “It’s something I look forward to every week. They’re a great class of people and great comedians.”

The local showcase may feel like a religious experience to some, but the consensus among local comedians is that the state of stand-up in San Antonio is in perpetual limbo.

With the December closure of the 25-year-old Improv Comedy Club at Rivercenter Mall, the seventh largest city in the U.S. is down to a single full-time comedy venue. Moreover, San Antonio isn’t considered a comedy mecca by any measure. Most comics who decide to stay and try to make it work dream of leaving. Those who leave seldom look back.

“What’s the next step for me?” asks Pool, who hosted the recent Blind Tiger show. “It’s something I’ve been thinking about a lot. Maybe I should leave. I just think we get the shit-end of the stick all the time.”

With Laugh Out Loud Comedy Club (LOL) left as the only San Antonio comedy club that can book touring comedians and also support local talent, local stand-ups are nervous about what the future holds. Still, some point to a venue like the Blind Tiger as signs the scene can grow and thrive.


Should I Stay, or Should I Go

Local comedian Joshua Cabaza was the last performer to grace the stage of the Improv Comedy Club at Rivercenter before it closed on December 9. As one of the club’s featured comics, its departure was a financial blow.

“We had two comedy clubs and now we have one,” said Cabaza, who has been working as a stand-up for nine years. “Half my club income is gone, so it’s definitely affected my pocketbook.” 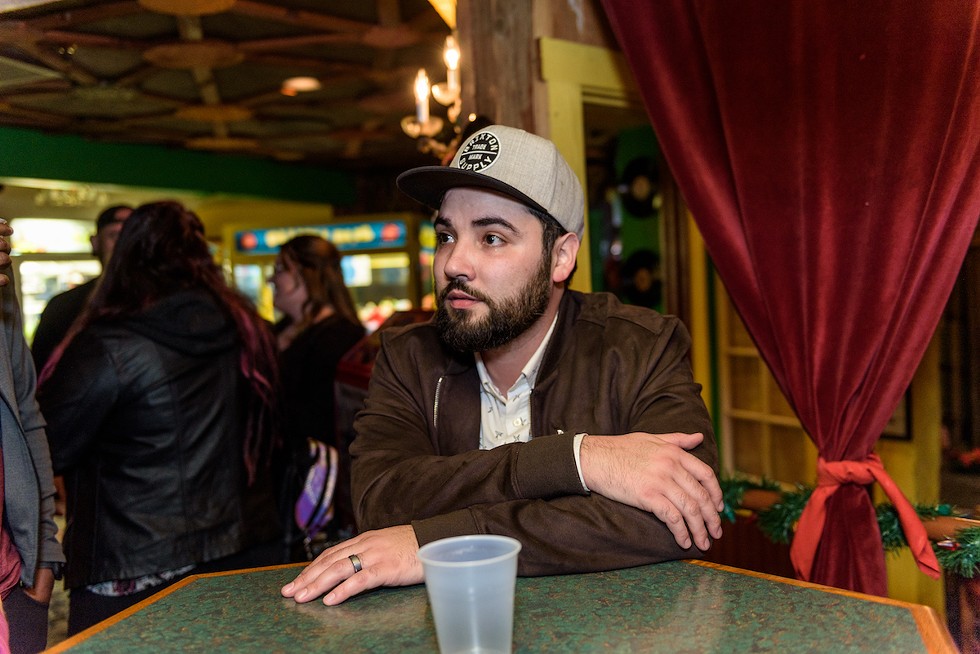 Jaime Monzon
Joshua Cabaza
Like many local stand-ups, Cabaza has thought about leaving San Antonio for a city that would afford him more opportunities. The ceiling for success here is low, so when the local comics hit it, they find it impossible to break through without moving on to markets like Austin, Los Angeles or New York.

Cabaza, however, isn’t in a position right now to relocate.

“Comedy is what I do full time,” he said. “I have two kids and a wife, and they have already sacrificed a lot. But who knows what will happen in the next few years. Moving has always been in the plan.”

Another reason comedians leave is that no one who can make an impact on their careers is paying attention to the San Antonio scene — or lack thereof. It’s one thing to deliver kick-ass performances week after week, but without industry insiders here to witness, it’s hard to reach the next level.

“If you’re Netflix or Amazon or Comedy Central, you’re not coming to San Antonio,” Cabaza said. “You’re going to Austin, LA, New York, maybe Houston. Those are the places people are going. That’s where you’ll get a manager, or an agent, or someone that is going to help you get work.”

Pool also sees the limitations of staying, but she’s not ready to give up on her hometown just yet. Although she’s only been performing for a year and a half, she’s managed to maneuver her way through what she calls the “sausage fest” of San Antonio’s comedy scene and earn the attention of her male peers. 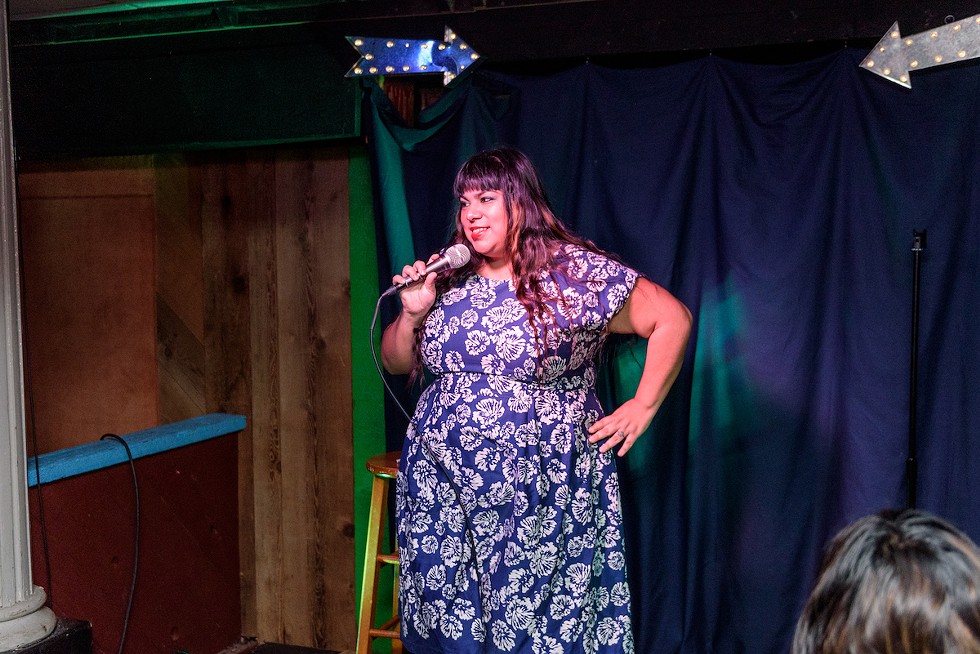 But it’s easier said than done, Cabaza said. He knows San Antonio can only give him personal not professional success.

“Anyone who is like, ‘Man, I’m at least one of the top five comedians in San Antonio’ is still nobody,” he said. “You could be the funniest person in San Antonio. Nobody is going to know who you are.”

Raul Sanchez, who started his stand-up career in 2010, wasn’t about to wait around to see what San Antonio could offer. After three years in his hometown, he moved to Austin and immediately won the Funniest Comedian in Texas award. In 2017, he packed up again and went east to New York City, where he has performed at The Stand, a prestigious East Coast comedy club. He’s since been featured on Epix’s stand-up comedy reality series Unprotected Sets.

“I did as much as I could do in San Antonio,” Sanchez said. “There just isn’t an industry there. In Austin, it at least has a small window where someone is going to peek their head in [a comedy club] and say, ‘Let’s see what’s in here.’” 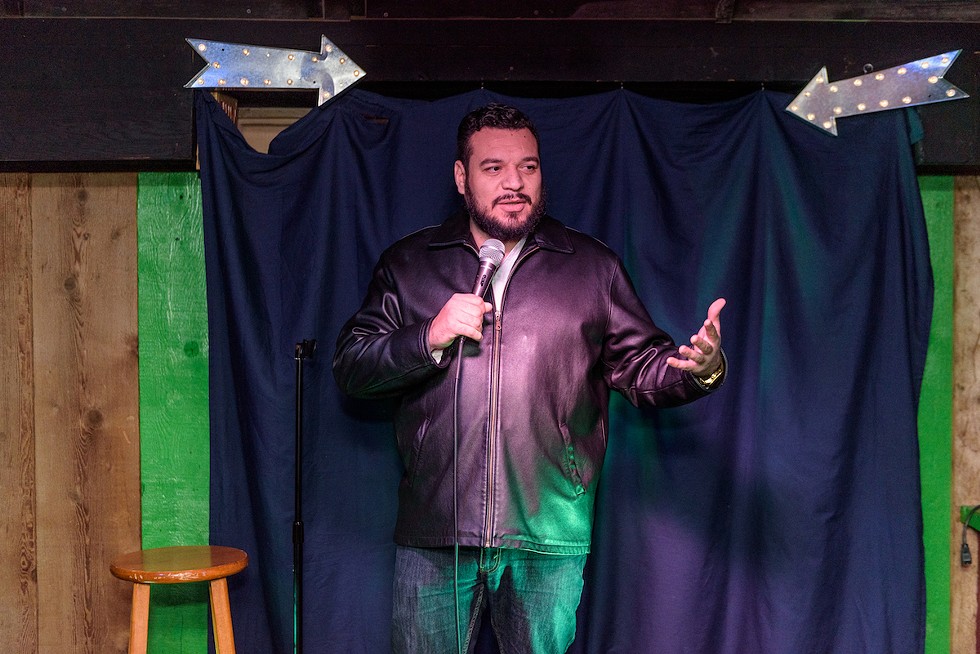 Jaime Monzon
George Anthony
In the end, Sanchez was motivated by the “romantic” idea that he could make it as a stand-up comedian living in New York. He wanted to challenge himself and didn’t want to become comfortable playing the same clubs and getting booked for the same kinds of gigs for the rest of his career.

“Comedians can fall into a trap where they feel like a local celebrity,” said Sanchez, who now resides in Brooklyn. “In the grand scheme of things, it doesn’t mean anything.”

Comedian George Anthony agrees. A San Antonio native, he made a difficult decision and relocated to Austin early last year. His daughter and girlfriend stayed behind.

“Not being able to pick up my daughter from school is a hard thing,” Anthony said. “But there’s no comedy industry in San Antonio. I wanted to put myself in the spotlight, and San Antonio just wasn’t providing that.”

Although Anthony believes the Alamo City comedy scene is doing everything it can to cultivate talent, it’s far from competing with the likes of Austin. It’s a tough reality, he said, but comedians need to accept it: without highly respected comedy festivals, competitions and showcases, it’s almost impossible to get discovered. 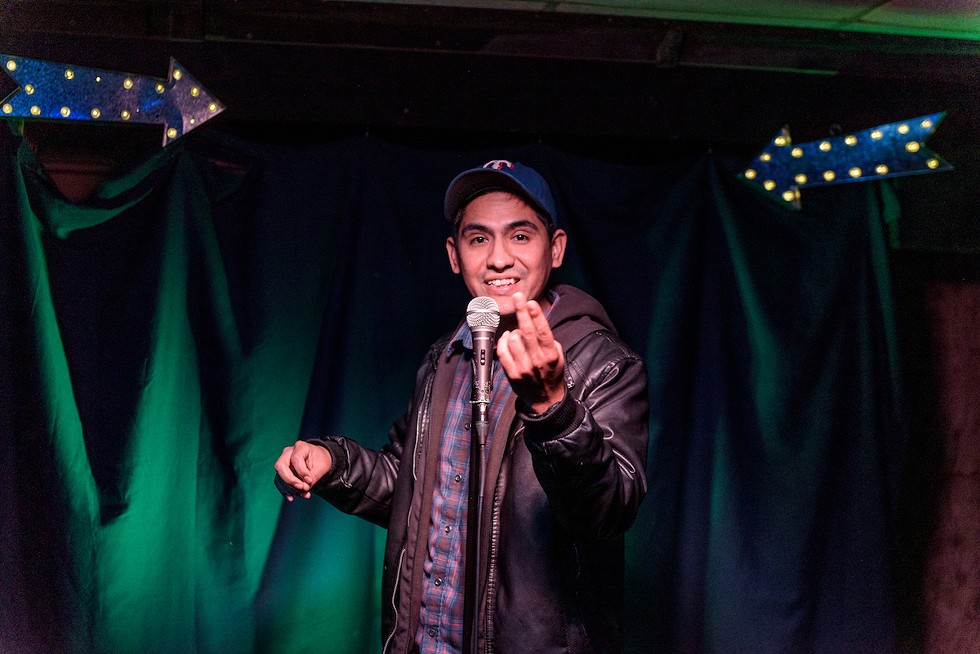 Jaime Monzon
Raul Sanchez
“San Antonio is a good place to develop, but there’s not a lot of eyes on the comedians there,” he said. “I would love to move back home again and do my thing, but if you want to make it big, you have to bounce around.”

When the Improv closed last month, owner Colleen Barshop also sold her 51 percent controlling interest in LOL to Tom Castillo, owner of ATC, a management company that oversees comedy club operations across the U.S., including the Dallas, Houston and Arlington-based Improv Comedy Clubs.

Contrary to speculation in local comedy circles, LOL will not change its name to the Improv, Castillo said. The club will continue to use the LOL moniker, although he adds that there are “possible paths with the LOL brand.”

Castillo, who’s originally from San Antonio, said he bought out Barshop’s interest because he’s always wanted a comedy presence in his hometown. He sees it as a growing market with great potential.

“LOL is the only ‘A’ club in San Antonio, and that will not change,” he said. “We will continue to bring the nation’s top talent to the market.”

Some things will change, however.

Castillo’s updating the club’s equipment and adjusting its menu. He wants to continue fostering the club’s relationship with local talent — even though some local comics feared the new ownership would favor Austin talent — and nurture adequate comedians who still have a long way to go.

“LOL will continue to do local shows and support local talent with work in all of the Texas venues,” Castillo said. “The challenge is to not only provide stage time to those individuals who you may believe are on the right track, but to also provide opportunity for those you may not believe in.”

While LOL is now the city’s only completely comedy-focused club, it’s far from the only venue for local stand-ups.

The Blind Tiger, started by comedian and San Antonio native Jay Whitecotton, has emerged as the city’s own version of the Comedy Cellar in Manhattan — although noticeably absent the big-name stars. Whitecotton, who’s also relocated to Austin, sees it as more of an “alternative room” and “comedy co-op” that features comedians inside an already established business.

And at least one other local club is hoping to pick up the slack in touring comedy.
Jokesters 22, which opened last April, markets itself as a comedy club, sports bar and lounge. It’s featured plenty of local stand-ups, and owner Marsha Mahaffey said she’s set a goal of bringing in touring acts this year.

“I hope to start working with booking agencies and giving our club credibility,” Mahaffey said. “Until you have those big names, your credibility isn’t as good.”

On the other end of the spectrum, San Antonio’s theater scene has been a conduit for some of comedy’s marquis performers.

“People want to see famous [comedians],” Pool said. “So, it doesn’t surprise me when those shows sell out. But the caliber of local talent goes unnoticed, which is why I think it’s important to cultivate a scene that supports local comedy. Frankly, it’s time San Antonio started showing up.”

In rare cases, local comedians can land gigs opening for one of those theater shows. Earlier this month, local comic Matt Golightly opened for Jeremy Piven at the Tobin Center. Fellow SA comedian Larry Garza hit the stage at the Aztec last September before Jim Norton. 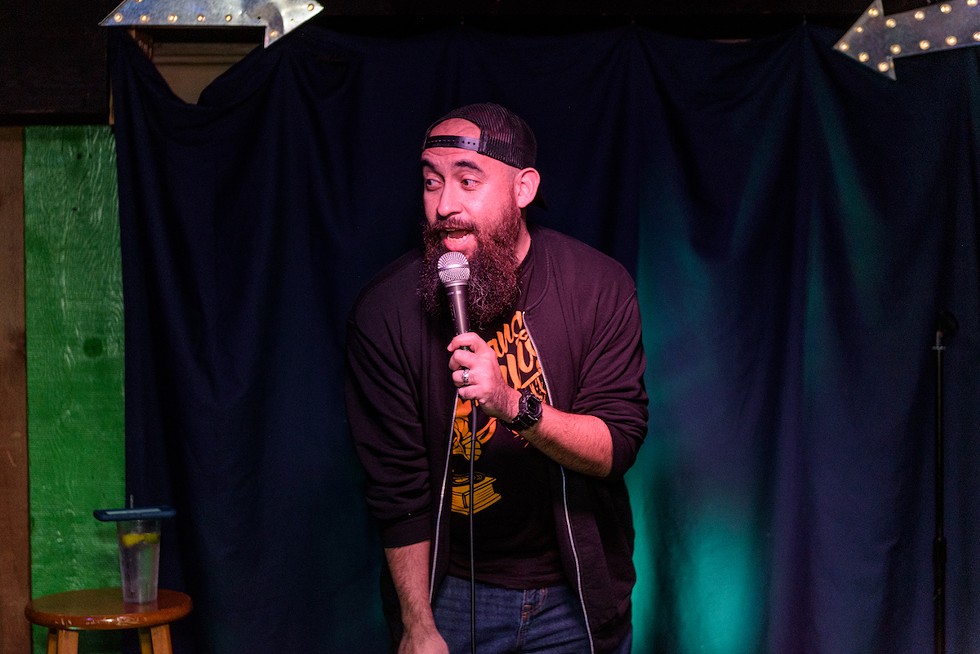 Jaime Monzon
Larry Garza
More often, though, top-tier comedians bring their own openers. That means local comics are more likely to open for a big name at a comedy club. Last summer, San Antonio’s Regis Velasco opened for comedian Bobby Lee at LOL and local comic Clifton Simmons got a guest spot during one of Mike Epps’ shows at the same club last month.

While opening slots offer limited opportunities for up-and-coming local comedians, other less-conventional spots that have found room for stand-up performances.

“Even if there were no clubs in San Antonio, the goal for a comedian should still be to always improve their comedy,” said Sanchez, the Brooklyn-based comic. “Sure, the clubs could do more stuff, but it shouldn’t come down to them to make a comedian good.”

Like all comedians, San Antonio comics understand that stand-up isn’t a team sport. They have to take responsibility for their careers and accept the highs and lows. At the same time, though, they want an opportunity to thrive in their home market. Maybe all they’re looking for is someone who cares about their craft as much as they do.

“We just need a chance,” Pool said. “I feel like San Antonio is golden, but people just don’t know it yet. I mean, I’m not going to lie, we have some trash comics, too. But for the most part, we’re pretty badass.”