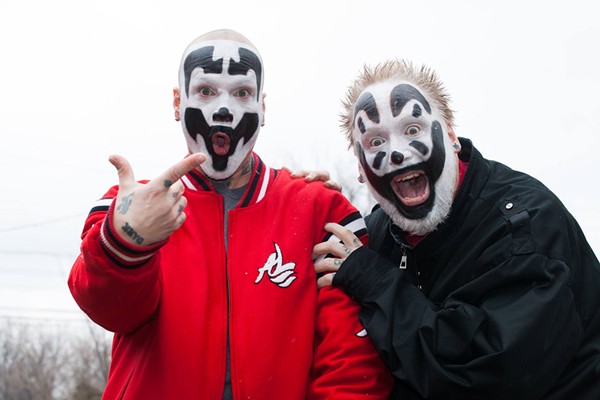 Just in case you were wondering – yes, it’s true. Your favorite rapping clown crew, Insane Clown Posse is coming back to town on — get this — Friday, October 13, with what is sure to be a Faygo-drenched concert experience at the Alamo City Music Hall.


I can’t help but “lol” as I write this and think “how the hell are these guys still around?” remember my brother owning The Great Milenko on CD back in ‘97 and I may have curiously checked out their music to see what all the fuss was about. But honestly, if I was gonna listen to white kids rap about fucked up shit, I was probably gonna listen to Eminem (sorry Jugga-folk). And I certainly didn't think that I'd be writing about them 20 years later.


I actually met Violent J a couple years ago while bartending Downtown and him and the Psychopathic Records crew were actually really nice, so, I mean, at least there's that, right?


Anyway, the cult-like draw they’ve had over the last two decades is pretty impressive and slightly disturbing. For instance, the band's annual four-day music celebration, The Gathering Of The Juggalos, which is in its 18th year, features almost everyone on the Pyschopathic Records roster as well as a number of nu-metal and rap/rock bands, plus a random outdoor activities like row-boating and wakeboarding, ‘cause what the hell right?


But that’s not all, On September 16, ICP and Juggalos from all over the U.S. (and possibly the world) will march on Washington D.C. to protest the FBI’s classification of the Juggalos as a gang ... The same day as that the pro-Trump rally MOAR is happening on the Washington Mall.


We can’t make this shit up.


Check out their video for their cover of Christina Aguilera's “Beautiful."