Jack Black And James Marsden Get Caught In A Sad Bromance 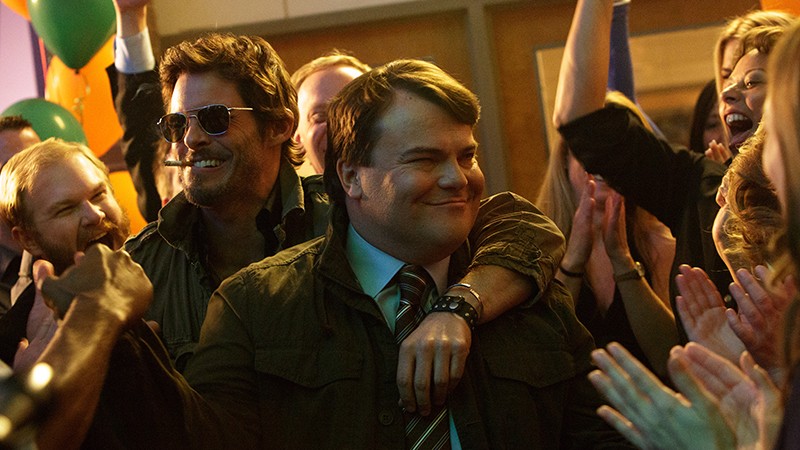 In Richard Linklater's 2011 film Bernie, Jack Black proved that with the right material (and, one assumes, direction) he could dial back the self-deluded man-child shtick and create a character that was simultaneously bigger than life and believably authentic. His portrayal of the real-life Bernie Tiede was both sweet and funny, carefully walking the line between parody and sincerity. Linklater had similar success with Black in the more overtly comic School of Rock, where he tempered the actor's manic energy with moments of real warmth and empathy.

Whatever mojo Linklater brings to the filmmaking game (Ethan Hawke is another actor who impresses under his direction), television veterans Jarrad Paul and Andrew Mogel would do well to make a study of the indie director's method. It could have saved their first feature, The D Train, from derailing what is an otherwise edgy premise.

Black is Dan Landsman, a socially awkward family man who takes his job as his high school class reunion coordinator way too seriously. Ostracized by his former classmates and fretting over the small number of RSVPs, he makes it his mission to secure a "yes" from the most popular graduate, Oliver Lawless (James Marsden), after seeing him on a national TV commercial. Dan believes that if he can convince Oliver to attend, the night will be a huge success and he'll finally be regarded as the class hero.

Exploiting his kindhearted boss' (Jeffrey Tambor) trust and technological naiveté, he uses the struggling company's funds to pay for the trip to Los Angeles, pretending that a major business deal is in the works. When his boss insists on accompanying him, Dan must go to extreme lengths to keep the ruse going as he tries to entice Oliver to return for the reunion. It's strictly clichéd storytelling up until Dan and Oliver's debauched night out together takes an unexpected and audacious turn (that I will not spoil here). Suffice it to say that the emotional fallout reverberates all the way back to suburban Pittsburgh, where Dan's long-suffering wife (the wonderful Kathryn Hahn) and his teenage son (Russell Posner) feel its effects. Worse, Dan's ridiculous lies may end up bankrupting the company he works for.

Co-writers and directors Paul and Mogel should be commended for sticking with their ballsy plot twist, bringing it around to an unapologetically squirm-inducing conclusion. Too bad, The D Train isn't funny enough to play as straight comedy nor dark enough to resonate as black comedy. Instead, it awkwardly tries to straddle the line between sitcom formulas and the uncomfortable outer limits of male bonding.

Black would seem to be a good choice for a character who has constructed layers of self-delusion atop years of painful rejection. Dan's coping skills — a mixture of graceless bonhomie and busybody pushiness — make sense, and played correctly, could have elicited embarrassed sympathy. But Dan's emotions and motivations are played so broadly that it's hard to see the human beneath his obnoxious neediness. It's as if the filmmakers never considered what attributes might make their protagonist attractive to his wife, or why his 14-year-old son would seek his parental guidance about his newly found sexual curiosity. Both offered opportunities to ground Dan in the real world. Unfortunately, as depicted here, Black's character is mostly a cartoon, singularly fixated on his high school reunion and the perceived bond he shares with Oliver.

Not to say there aren't promising moments in The D Train. The best ones come between Marsden and Black, who establish a strange and convincing rapport in their odd-couple interactions. Hunky Oliver's casual hedonism is an engaging match for Dan's sycophantic self-doubt, pushing the plot into dramatically risky territory. Marsden understands how Oliver's professional failure as an actor feeds off of Dan's insecurities and provides his character with a desperate, even vulnerable undercurrent to the Hollywood swagger. Their connection is not only believable but, at its core, tragic.

The rest of the supporting cast similarly tries to rise above caricature, with Tambor and Hahn, in particular, grounding their characters in believable confusion and disappointment.

But the movie, ultimately, is on Jack Black's shoulders and it's hard to deduce whether Mogel and Paul lacked the chops to rein in his manic energy or, more misguidedly, encouraged it. The D Train has some potentially interesting things to say about the agonies of mid-life doubt and confused male identity, but ends up derailed by a hero with whom it's almost impossible to relate.