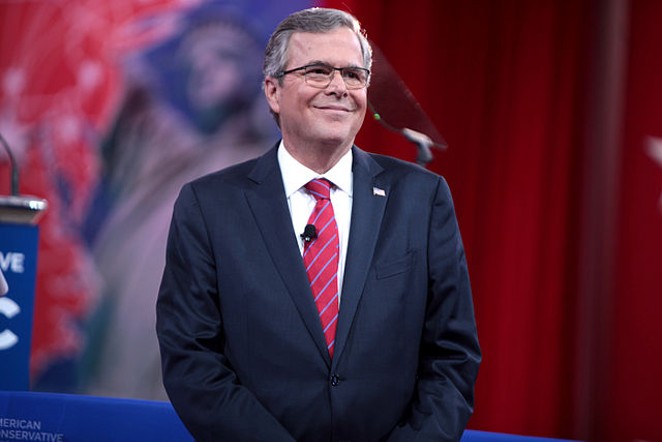 Via Wikimedia Commons user Gage Skidmore
Former Florida Governor Jeb Bush will fundraise in Texas later this month for his presidential run.
Jeb is in! Now break out your checkbooks, Texas GOPers.

Jeb Bush, former governor of Florida, brother to a former president and son to another, announced today that he’s running for president. No surprise there — he’s been unofficially running for months.

Although Bush cut his political teeth in Florida, he’s deeply connected in Texas as well. So it’s no wonder that he’ll hold two fundraisers in Texas on June 25 — one in Dallas, another in Houston — according to The Texas Tribune.

The Tribune reports that the events will cost attendees $2,700 to get in the door, with event organizers expected to raise ten times that amount.

But it’s not for nothing — if you pony up the princely sum of $27,000, you get a photo with Bush, and a two-day retreat to Kennebunkport, Maine, where the Bush family compound sits.

Bush is the Republican front-runner in many polls. But maybe not in the one that counts most — his mom’s.

When murmurs of a potential Jeb run started stirring in 2013, Barbara Bush, mother of Jeb and George W., told CNN that even though Jeb was “by far the best qualified man” for the job, he shouldn’t run.

“There are a lot of great families, and it's not just four families or whatever. There are other people out there that are very qualified and we've had enough Bushes,” she said.