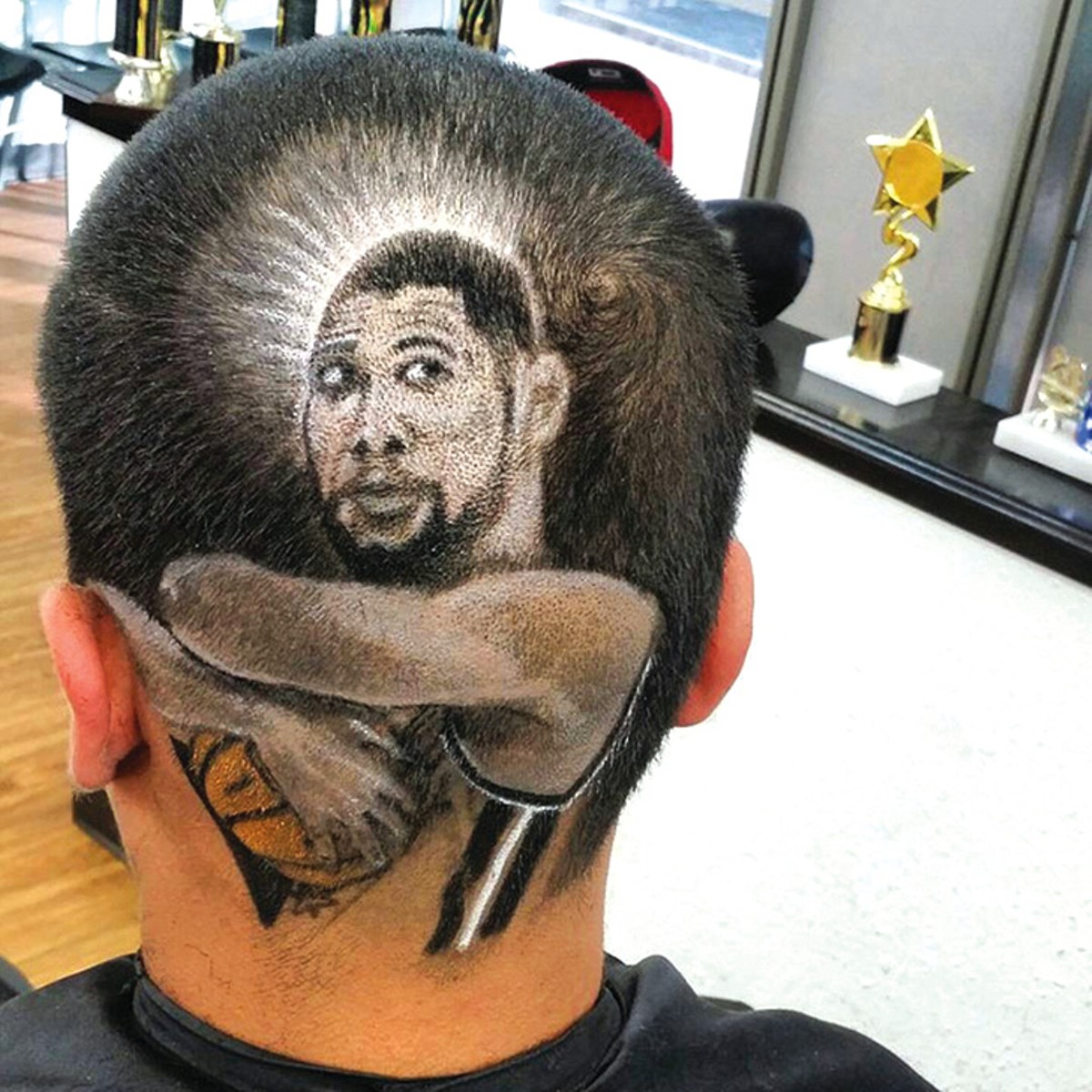 Early one morning at his West Side home in the early 1990s, 12-year-old Joe Barajas flipped on the TV to watch his two favorite Saturday morning shows: X-Men and Inside Stuff, the weekly basketball news magazine.

Barajas had no idea he'd find his professional calling during his Saturday morning ritual — much less on the side of Anthony Mason's head.

But shaved into the New York Knick forward's hair was the Inside Stuff logo. Mason did this often, sometimes with his nickname, "Mase," or with the Knicks logo. Barajas hadn't seen it before, though, and he was captivated. He took his little brother and a pair of cheap clippers into the bathroom and set to work.

"I cut out the Dream Team logo on his head," Barajas said. "It looked good — well, it looked decent. It didn't look perfect."

Barajas didn't know it at the time, but that Saturday morning experiment was a precursor to how he'd make his living. Known professionally as "Joe Barber," Barajas is acclaimed for creating portraits of Spurs players on his customers' heads. It's a unique, if ephemeral, kind of art that allows Barajas to combine his two passions: cutting hair and the Spurs.

Barajas remembers his mom buying him "Midwest Division Champions" T-shirts in the mid-'90s. He abhors bandwagon fans and division rivals alike, once turning down $500 for a Dirk Nowitzki portrait.

After a bumpy road sleeping on friends' couches, cutting hair for $10 a pop, and packing chips for Frito Lay to put himself through barber college, Barajas cut his first Spurs portrait in 2006. That was back when the Spurs had just three championship banners in the rafters and Tony Parker, his first subject, was named to his first of six All-Star Game appearances.

Tired of cutting the same designs over and over — stars, swirls, the occasional sneaker logo — Barajas wanted a way to stand out. He found it in the sports section of the newspaper.

"I was reading the paper with my friend, and I told him 'I think I can do this [Tony Parker] picture on your head,'" Barajas said. "He started laughing, and I said 'Seriously, I can separate the three colors, white, black and gray on hair. So he said, 'Well do it, and if you don't like it we'll just cut my hair bald.'"

That was over 10 years and 200 portraits ago. The look was a hit. Demand, and Barajas' career, took off.

The buzz his work creates on social media helps him regularly land national attention. ESPN, broadcast television networks, Yahoo! and dozens of other media outlets have featured his portraits. He won $15,000 on an episode of the now-canceled Cedric's Barber Battle, which briefly ran last year on The CW. He appeared in a commercial for the New York Rangers, in which hockey players pose for him while he shaves their likeness onto fans' heads.

While going viral is good for his bottom line, Barajas says it's never his intent. Such buzz is valuable in an industry that's big on one-upmanship and innovation, but he's more interested in connecting with his community and providing a one-of-a-kind experience to customers.

"It's great for me because now I feel like I have a stamp on my city," Barajas said. "It's not about the money, it's not about the TV or any of that stuff. It's about knowing that I'm connected to something I've been supporting for so long."

Barajas' portrait process starts with him searching for the "perfect image" of the Spur he'll portray. Then he maps out how it will fit on his customer's head — where to position it, how much space it will take up. Once he's got a plan, he sketches it out in white eyeliner, starting from the nose and the eyes and then branching out to the rest of the face. He takes care to measure as he goes, making sure that the proportions from ear to ear, from eye to nose, from nose to chin, are all accurate.

A two-hour portrait session costs about $100. The finished product lasts between five and seven days, depending on how fast one's hair grows. And even though Barajas has now cut hundreds of them, the thrill of creating a one-of-a-kind, temporary piece of art for doesn't go away.

"I'm a perfectionist so I still don't feel like I've done the perfect portrait yet, but I've gotten real close. I always feel like I can do better," he said.

His best yet? In Barajas' opinion, it's a recent piece: A massive rendition of a selfie the Spurs took in April 2014. It included 12 different faces and wrappped from one side of the customer's head to the other. To do it, Barajas studied dozens of images to understand the dimensions of each face and how they'd fit together. The cut itself took eight hours to complete.

It's the kind of challenge that Barajas seeks out now. Although his portraits have won him respect and success, he says he's still driven to create new art, to find new hills and then climb them. He's got banners in the rafters, but he'd like to add a few more.