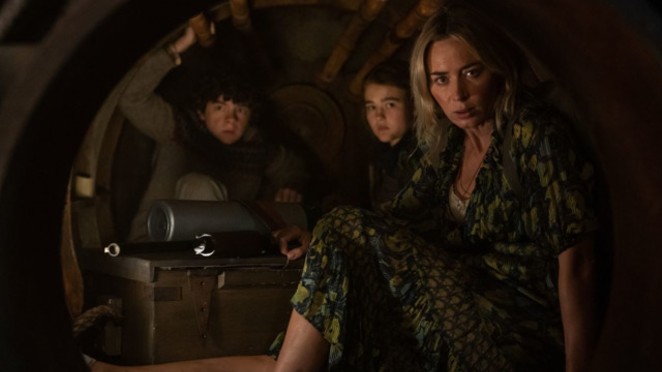 Paramount Pictures
Evelyn (Emily Blunt, far right) and her children, from left, Marcus and Regan, hide inside a furnace to avoid alien attackers in "A Quiet Place Part II"
Taking a second bite of the apple, especially in a potential horror franchise, is always a tricky gambit.

But, as follow-ups go, John Krasinski’s A Quiet Place Part II stands proudly as one of the best second slices in recent cinematic memory, regardless of genre.

Krasinski reteams his core players from his 2018 original, including his wife, Emily Blunt, as Evelyn Abbott, matriarch and lone surviving parent, as well as Millicent Simmonds and Noah Jupe as her kids, Regan and Marcus, respectively, and he makes several notable additions to the cast, including Cillian Murphy as family friend Emmett.

Blunt remains a powerful force as an actor, capable of projecting vulnerability and fiery determination, often in the same breath, and her relationship with her fictional family resonates throughout Part II, especially now that Evelyn also has a newborn to defend from the scurrying alien insectoids that have invaded Earth and laid waste to most of the population.

A Quiet Place is also a unique franchise in the sense that while both films are masterfully constructed and packed with white-knuckle moments of unnerving dread, they’re not cut from the same cloth as most flashy, CGI-heavy alien invasion flicks. This isn’t ID4: Independence Day, which you can watch on repeat if only to revel in the oddball pairing of Will Smith and Jeff Goldblum cracking wise while blasting off into space.

But what works, and what likely holds viewers enthralled, is what Krasinski seems to innately understand about the genre itself. Truly memorable horror movies require memorable, relatable characters acting in a way that feels genuine and organic.

If you can lose yourself in a movie, and imagine yourself on screen, struggling to comprehend the same unfathomable scenario confronting the main actors, and doing exactly what you watch them do, then everything else falls into place.

And that’s where A Quiet Place Part II excels.

Don’t get me wrong, the aliens in this series are quite terrifying and I was extremely thankful not only for more close-up looks at their design and anatomical features but also to see how they first arrived. Part II opens on Day 1, meticulously detailing small-town life in a rural community, as dozens of residents gather for a Little League baseball game while cable news stations broadcast breaking news of an unknown disaster in Shanghai, China.

Once the sky over the ball field explodes in a rolling ball of flame, and the first aliens appear, wreaking havoc on the thoroughly unprepared citizens, Krasinski lets loose with a rousing sequence, basking in the chaos that would likely ensue if that happened for real, before jumping forward in time to Day 474, which is exactly where the first film ended.

But what held my attention more was my concern for Evelyn and the newborn, my desire to see Marcus man up in the absence of his father and my dread that Regan might be too strong-willed to survive in her quest to find a way to broadcast the reverb frequencies that disorient and immobilize the aliens.

If you’re a filmmaker, and you’re making an alien invasion movie, and your audience is so engaged with your cast to the point that the aliens become secondary, then you have done your job, and well.

A week ago, I went back inside a movie theater for the first time in 10 months, allegedly to witness the kickoff of the summer movie season with the debut of Spiral: From the Book of Saw, which is the eighth film in that horror franchise, and by far the worst film in the entire series.

A Quiet Place Part II is the proper way to launch a new season of cinema thrills, especially this movie season, our first time going back to theaters following the long pandemic nightmare that we’ve endured.

John W. Allman has spent more than 25 years as a professional journalist and writer, but he’s loved movies his entire life. Good movies, awful movies, movies that are so gloriously bad you can’t help but champion them. Since 2009, he has cultivated a review column and now a website dedicated to the genre films that often get overlooked and interviews with cult cinema favorites like George A. Romero, Bruce Campbell and Dee Wallace. Contact him at Blood Violence and Babes.com, on Facebook @BloodViolenceBabes or on Twitter @BVB_reviews.