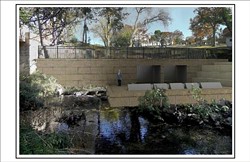 State District Judge David Berchelmann signed an order today blocking the City of San Antonio from moving forward with any construction on a controversial drainage project before a trial jury hears the case later this year.

Lawyers with the Headwaters Coalition and the River Road Neighborhood Association took the city to court last month to stop the project, saying the city broke its contract with the voters by substantially changing the bond-funded voter-approved Broadway drainage project.

Initially, the project was meant to ease flooding on Broadway by piping storm water underground from Burr Road into an existing drainage structure near Carnahan. But sometime after voters passed the city's 2007 bond, the city nixed that plan and decided it would rather have the line hang a sharp west turn at Hildebrand. The project, as the city now presents it, would dig a 70-by-8 foot concrete wall with two large 6-by-9 foot drainage culverts into the east bank of the river, between Miraflores Park and the river’s headwaters.

In a hearing last week, City Attorney Michael Bernard argued that while the judge might be able to bar the city from using $9 million in bond funds on the project, he couldn’t stop the city from scraping together other money to go ahead with construction.

Berchelmann apparently disagreed. In the injunction the judge signed Wednesday, he not only ordered the city to stay away from the bond money but explicitly blocked any construction on the project before the case goes to trial – maintaining the “status quo” the plaintiffs’ lawyers had asked for. The order also explicitly bars the city from building the new massive drainage outfall until a jury decides the case.

Helen Ballew, executive director of the Headwaters Coalition, has long said the city misled voters when it moved away from the specific voter-approved plan. The city’s new plan, she says, pumps water out into a historically sensitive area of the river and disrupts the Coalition’s well-known plans to build a “spiritual reach” of the river, linking trails from Brackenridge up to the headwaters sanctuary and the river’s source at the Blue Hole.

Some Native American groups have also cried foul over the city's new project, saying the Miraflores area of the headwaters, which would be partially dug up during construction, has cultural and religious significance and is rich with prehistoric deposits.

Ballew and others opposed to the new project have claimed they were shocked when the city rolled out the new plan late in the game, saying it was never mentioned in any of the talks with local stakeholders. Last summer, Ballew said, her group held a visioning session for the upper reaches of the San Antonio River, hosting some of the biggest movers within the River geopolitical spectrum: the head of the parks department, head of the San Antonio River Authority, reps from the River Improvement Project, and several high-level folks at the City.

This meeting was, we know now, a year after City planners had launched backroom plans to re-route the drainage project to flush flood waters out into the river’s headwaters.

“So if they knew, they chose to keep it a secret from us,” Ballew said. “If they didn’t know, that means the city hadn’t even shared it with any of these high-level people that are involved in river projects, including their big river partner at the River Authority.”

Grumblings over the impending destruction of Municipal Auditorium are starting to strike an eerily similar tone - opponents there claim the County duped voters into approving money for a new performing arts center without mentioning the project would level most of the landmark auditorium.

*Edited 5/12/11 to show map of city's proposed project down Hildebrand.