Just Happens to be LGBT: Does Pride Month have anything to do with politics? 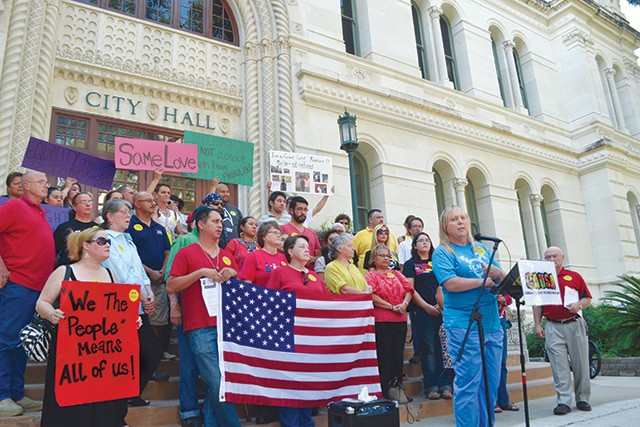 Pride Month. What exactly does this month mean for lesbian, gay, bisexual and transgender (LGBT) people? Is it primarily a time for a community and cultural celebration, or is it a political action of sorts? A reminder to take it to the streets? San Antonio’s own Pride “Bigger than Texas” takes place this weekend on July 5 at Crockett Park.

Last week marked the 45th anniversary of the Stonewall Riots (or Stonewall Rebellion, as GLAAD and some other organizations call it—perhaps not inaccurately), in which many LGBT people fought back against being targeted unfairly by police at New York’s Stonewall Inn. Even though the average circuit kid may not know it, Pride celebrations were created as unofficial ways to commemorate this political spark of the modern LGBT rights movement. In fact, countries all over the world have adopted June as the de facto opportunity to celebrate queer culture.

But is that what Pride celebrations are these days? Are they political in the same way as the event that sparked their very existence? Or have they morphed in more cultural and community events that showcase LGBT culture? James Poindexter, president of Pride San Antonio, which puts on the parade, acknowledges that political apathy is an issue, but says, “I don’t know if engaging people during Pride is the answer to the problem. It is definitely a place where many are all together, so it at least creates an opportunity to have discussion.”

In political activism, people sometimes trade stories about what “activated” them—the defining moment when they realized they would take a stand and work diligently towards the cause they support. Much has happened since last year’s Pride with the September 2013 passage of San Antonio’s LGBT-inclusive non-discrimination ordinance, and I witnessed many people get activated—visiting city council chambers or even learning for the first time who represented them on council.

I’ve been politically inclined for as long as I can remember. A lot of that came from my parents, who would often discuss elected officials or ballot measures at the dinner table simply as a standard topic of conversation. But even though politics was fair game for our family, I didn’t get activated until many years later when I came out and wanted to do something to support my local LGBT community.

However, politics can be draining. It’s a process that is often compared to the wonderfully nasty culinary task of “sausage-making” because, well, it ain’t pretty. As Chad Reumann, the area representative for the Human Rights Campaign, says, “People get apathetic about politics because it’s such a long-term investment. You don’t see what you want to happen right away, so most people quit before the job is done or they get bored because they keep having to work on the same issue cycle after cycle before it ever gets voted on or considered.”

He’s not wrong. Most people (gay or straight) would rather do something social and—at most—talk lightly about politics over dinner or drinks than actually go to a place where policy is made to speak truth to power. Frankly, I’ve often wondered if many of the “rebels” at Stonewall would have taken the fight to the NYC government if the fight hadn’t come to them at the bar. This isn’t to disparage the memory of Stonewall or those who were there—it’s simply to acknowledge that most people are reactive rather than proactive, opting not to take part in the process unless they feel personally pushed or threatened.

Dan Graney, who has long been involved in state and local politics and is past president of the Texas Stonewall Democrats, reflects that a lack of political involvement is really not unique to San Antonio or to LGBT issues. “It’s really a nationwide problem,” he observes. “But in San Antonio, I attribute the lack of involvement to the three Cs: closetedness, compartmentalization and complacency. While many LGBT people may be out to themselves, they are not yet out to family members, friends or co-workers—[in other words] selectively out. If we’re not fully out, we tend to compartmentalize that aspect of our lives as something we only trot out to the bars, online dating sites or private dinner parties rather than integrate that aspect into the whole of our lives. This leads to complacency about the struggles we still face. It is easier and more comfortable to celebrate hard-fought victories rather than get involved in the trench warfare that is waged to achieve those victories.”

Graney’s comments perfectly illustrate the interrelatedness and never-ending loop between the political and the cultural/communal aspects of Pride month celebrations. If Pride allows us to come out as an LGBT community, that removes—to some degree—the closetedness for even a little while. But it’s a matter of breaking out of the closet and the compartmentalization for longer than one celebratory weekend or even one month. It has to be full-time.

Elena Guajardo, also a leader with Stonewall Democrats of SA and former District 7 city councilperson, irons this point out by saying that it’s the “little victories that are not always visible to others but that change hearts and minds. These involve finding small ways to come out to everyday people in everyday situations.” To her point, Guajardo tells the story of how she got to know a handyman who was fixing up her house. The man, who was vocally conservative and seemed very traditional in his beliefs, later told Guajardo that he searched for her on the internet and “discovered” that she was lesbian. In that split second, she braced herself for anything, but he then said how much he respected her work and that his daughter was lesbian. It led to a humbling conversation and open discussion for both.

“I counted that as a little victory—not in terms of winners and losers, but win-win for us both. It wasn’t about ‘political’ actions, but a real personal connection. Usually, I’m about as out as they come, but I hadn’t been with him. He reminded me, though, that we are all challenged every moment of every day to be authentic and open. It may take a while, but those sorts of conversations are what later transform to policy and affect political futures. If Pride can’t be a flashpoint every year to build on these sorts of connections and authentic moments, then it is a political event.”

Going back to his comment about most people not wanting to be involved in politics because of the long-term investment, Reumann elaborates, “What I always hope people will eventually realize is that there’s nothing like working on something and seeing it to completion, especially when an elected official that you supported actually votes on something that betters lives. In our instant gratification world, the time it takes for that to happen may not be appealing, but it’s a great payoff for those willing to put in the hard work.”

Both Poindexter and Guajardo end their interviews with a call for more local- and state-level officials, especially city council members, to participate in Pride events, which is a much more common occurrence in other major cities than it is here. Poindexter says that while some, like state senator Leticia Van de Putte and councilman Ray Lopez are regular attendees, there could be more participation from others. As Guajardo says, “It’s true that the people have to get into the politics, but the politicos also have to get out to our people.”