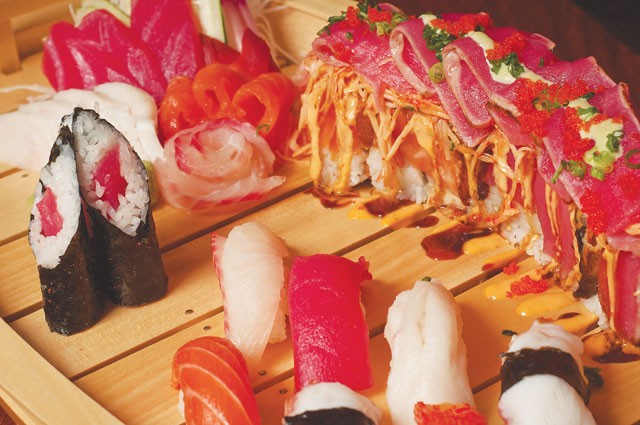 Fresh fish is the cornerstone of a successful Japanese sushi restaurant. While H-E-B sushi is surely serviceable in a pinch, sushi is best appreciated when it is handmade on the fly by a talented chef with quality ingredients. It is with this basic tenet in mind that I approached Kai Sushi, a new establishment located on 410 and Vance Jackson. Stephen Yang decided to open Kai Sushi after a Japanese friend of his came to visit San Antonio and noticed a dearth of quality Japanese cuisine. Being a longtime fan of Japanese food myself, it was time to put Kai Sushi through the ringer and see where it stands in the San Antonio Sushi Pantheon.

Tucked cozily on the side of the freeway, Kai was an easy restaurant to get to. The freestanding building housed Tom’s Ribs for years (and more recently BJ’s American and Seafood) and I was anxious to see how they were able to squeeze a Japanese atmosphere from a classically American establishment. Upon entering, it was clear that a cultural war had been waged — a sushi bar was front and center in the middle of a restaurant that still had the vestigial traces of Americana. Seating was spacious, and all the usual Japanese accoutrements were in place, but it must be noted that the atmosphere lacked the typical coziness and closed-in feeling that one usually associates with a sushi restaurant. However, I was here for the fish, and that definitely did not disappoint.

I started off by having a sushi combination platter prepared by chef Michael Luna, a sushi veteran with over 20 years of experience working at Fujiya Japanese Garden. Sushi in Japan is usually a simple, modest affair of fresh fish and rice. In Texas, large elaborate sushi rolls have become a legitimate extension of Japanese/American fusion. I’m happy to report that chef Luna’s reputation remains intact. A favorite was the “Ultimate Roll,” consisting of shrimp tempura, cream cheese and avocado, wrapped around yellowtail fish. Topped with spicy crab and seared tuna with green onion, this roll spared no expense and was a visual delight. The flavors were great, the fish was fresh, and the rolls melt in your mouth. I was informed that Kai offers a $21.95 all-you-can-eat sushi roll experience on Friday through Sunday with full-sized portions of a fair number of their most popular rolls. Given the quality that I experienced, this is an excellent deal.

Next I sampled various nigiri, which translates as a piece of fish on a small clump of rice. Mine was made by Shibasaki-San, a Japanese chef with over 50 years of experience in Japanese cuisine. The fish was fresh, well proportioned, and the rice didn’t fall apart after it met the chopsticks, a sign of quality rice and knowledgeable preparation. Given their emphasis on serving authentic fare, I decided to sample their Shrimp Tempura Udon, a traditional Japanese noodle soup. While the udon was definitely serviceable, the shrimp tempura really stood out. Lightly breaded and full of flavor, it was one of the better shrimp tempuras that I’ve had in Texas.

Rounding out the experience were absolutely delicious drinks created by Angela Yang. Kai utilizes sake in a good number of drinks, ranging from martinis to margaritas. I was apprehensive at first, but the sake made for a dangerously smooth drink compared to your typical tequila margarita and gin-based martini. The Lychee Martini, Sake-rita, and Sake Strawberry Daiquiri in particular are highly recommended.

To end the night, I had fried vanilla ice cream for dessert, which at this point was expectedly delicious. The service was excellent throughout, and the pride the chefs had in their food was clearly evident in every bite. Owner Stephen Yang told me that Kai Sushi was currently still in a “soft opening” phase, constantly refining and tweaking the menus until the scheduled grand opening in January to coincide with the Japanese New Year. By my reckoning, Kai’s offerings and considered delivery already trump many established sushi joints in town. This is one to seek out. •

All you can eat sushi rolls (Fri-Sun), Shrimp Tempura, Sake-Rita.