Kemosabe wasn't such a bad guy after all 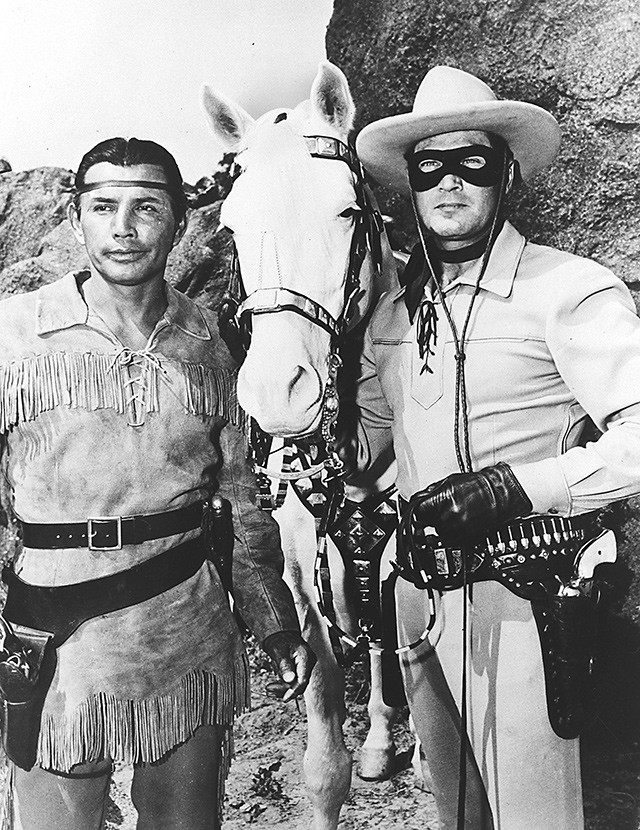 The cheesiness, the Native American put downs, the rewriting of history in regards to what really happened to the Native Americans here… Forget about all that — a closer look at The Lone Ranger TV series that aired from 1949-1957 (based on a 1933-1954 radio show) presents two equally smart characters battling not only injustice, but the show’s political incorrectness itself.

For starters, much has been said about how demeaning the Tonto character was. Supposedly named after an Apache or Potawatomi word, in Spanish tonto means “fool.” And any minority serving a white master would give the creeps to anyone slightly concerned about equality. But Tonto was the Lone Ranger’s friend and (almost) equal, and definitely just as intelligent — he could see and smell bullshit from a mile away.

No, I’m not minimizing the obviously outdated nature of the show. But not all Lone Ranger episodes dealt with Native Americans, and those that did often had a surreal, prejudiced build-up by most characters (and sometimes a narrator), until the Lone Ranger and his loyal friend would put things in order by punishing the evil doers while exposing everyone else as the bigots they were, with a gutsy determination that would make Marlon Brando proud.

Take, for example, “The Renegades,” an episode from 1949 you can find online or in the 3-DVD set Howdy, Kids!!, a ’40s and ’50s western collection released by Shout! Factory earlier this year. It starts with the Lone Ranger (Clayton Moore) on his horse going downhill with his gun towards the camera. He fires eight meaningless gunshots in 37 seconds, while a narrator paints the picture.

“Indians on the warpath … red men versus white … burnings, scalpings, atrocities, massacres,” the voice says. Cut to smoking the pipe of peace after “solemn treaties were made which guarantee forever the rights and properties of the red man.” Thanks to the white man’s big heart, the red men were “given [emphasis mine] land in which to live, regular shipments of supplies to provide for their needs, while law and order in their territories is being kept by the presence of the United States troops.”

Then, smoke signals only Tonto (Jay Silverheels) can read announce trouble. The Lone Ranger allows Tonto to go talk to the chief of the Washita reservation, but warns him — any Indian outside of the reservation is considered a “renegade.”

“They’re very strict these days,” the Lone Ranger says. “Make sure you report to the [white] Indian agent in charge there.”

The reason Tonto had been called from the Washita reservation was that the trains delivering provisions for the tribe were being stolen and the renegade “Indians” were being blamed for it.

“What’s your business, Indian?” “agent in charge” Jim Lackley asks Tonto as if talking to a turd on legs. Tonto tells him what’s going on and leaves, and Lackley’s assistant comments, “Something familiar about that Indian.” To which Lackley replies, “Oh, all Indians are alike.”

As it turns out, it was corrupt soldiers who were stealing the stuff, and the Lone Ranger from the very beginning complains whenever someone asserts that, surely, it was the Native Americans who were stealing.

Tonto — as sharp as the Lone Ranger, stunted speech notwithstanding — soon figures out who the real culprits are, the bad guys are captured, and the starving Indians can resume their meals. You see? The Lone Ranger and Tonto were down.

Just in case any “renegade Indians” take up arms before the big movie, whether out of generosity or guilt, 64 years later Disney donated all ticket proceeds ($1,000 each) from the June 22 world premiere of The Lone Ranger at Disney California Adventure Park in Anaheim, Ca. to the American Indian College Fund, which sold the tickets to the public. Not only that: Disney underwrote the full cost of the premiere, so the AICF could reap all the profits.

As Tonto said in a 1953 episode, “My friend do many things people not expect him to.”