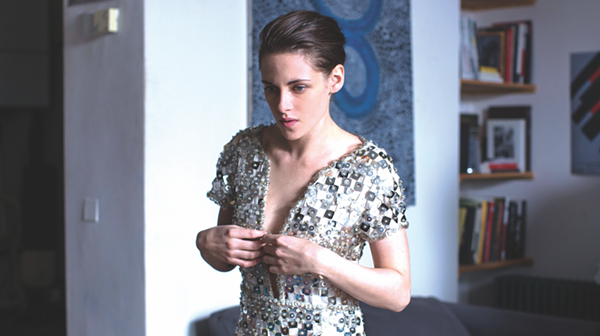 Oh, what a strange and lovely and melancholy film! The genre-defying Personal Shopper — part mystery, part drama, part thriller, part supernatural fantasy — is nothing you can expect, and continues to challenge your expectations at every turn: It’s an electrifying thing for a movie to pull off this well, tripping you up while also keeping you satisfied (unless you require concrete resolutions and answers to all the questions a movie asks, in which case you may well find yourself frustrated). The lingering eeriness Personal Shopper left me with is a great wonder.

American Maureen (Kristen Stewart) haunts Paris working as the personal shopper for a celeb and waiting for word from the Other Side from her recently deceased twin brother. She is a medium, as he was, and they vowed that whoever died first — a congenital heart problem they shared made it a not-remote possibility that one would die soon — promised to communicate from the afterlife (if there turned out to be one). But it’s been months, and Maureen is still waiting. Or is it all just in her head? She describes being a medium as an “intuition,” a “feeling,” a “vibe,” which means it’s possible that it is all purely subjective. She wonders as much as well, and Personal Shopper toys, deliciously and in surprising ways, with ambiguity — sometimes it seems we know more than Maureen does about the authenticity of her spiritual experiences, though maybe the film is toying with us, too.

This is not a traditional sort of ghost story: It’s quiet and pensive, more evocative than scary. And there isn’t a lot of plot. Olivier Assayas — who won Best Director at Cannes last year, and also wrote the script — instead steeps us in the moody sadness of Maureen’s grief and loneliness, and also her self-doubt. She is nearly a ghost herself in the life of Kyra (Nora von Waldstätten), the indeterminately famous woman she works for. Maureen (and we) barely glimpse Kyra even though Maureen enjoys — if that’s the word — the privilege of the intimate spaces of her bedroom and her closet as she drops off the high-fashion items purchased or borrowed on Kyra’s behalf. Or maybe Kyra is the ghost? (Is she a model? An actress? A socialite? We have no idea. She’s a wisp in the cultural ether.) In between tending to Kyra’s fashion needs, Maureen explores the work of Swedish artist and mystic Hilma af Klint (who was a real person, and made gorgeous art way ahead of its time) and discovers a “cheesy ’70s TV movie” about Victor Hugo’s explorations of spiritualism (which isn’t a real movie; Assayas invented it, including the “clips” we see of it). Is Maureen looking for confirmation that her abilities are real, or is she scoffing at herself? A bit of both, perhaps?

Stewart’s onscreen persona of restive reluctance has never been put to better use: Assayas has said he was inspired by her (he’d previously worked with her on the marvelous Clouds of Sils Maria) to write Personal Shopper, and with her, has created a disquieting portrait of contained emotion, as if Maureen is afraid to give voice to her sorrow, or to admit to herself how lost and uncertain she is. (One scene in which she does, briefly, give in to her distress, as a series of mysterious texts provoke her, is all the more affecting for how hushed it is.) Even to its uneasy final moment, Personal Shopper never gives Maureen — or us — solid ground to rest on, not emotionally, not psychologically. I’m still turning it over in my mind, even after two viewings, and I don’t expect to be able to shake it off anytime soon.