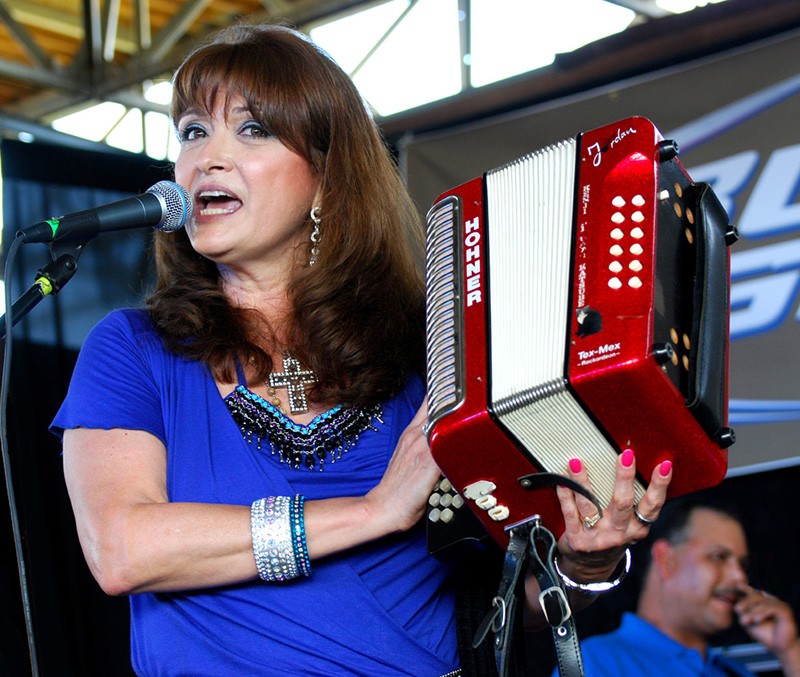 By virtue of a good head start, Linda Escobar has enjoyed one of the longest and most prolific singing careers in the world of tejano music. In 1965, when she was just 7, Linda turned pro with "Frijolito Pintos," a major hit recorded with her father, tejano guitarist Eligio Escobar.

"It was a little rhyming song that came to mind to my dad and I at the time," Escobar told the San Antonio Current last week. "It wasn't one that we chose to record, but when we were in the studio, we needed a side B and I brought up Frijolitos Pintos. The band said, 'let's hear it,' so I sang it and it just turned out to be a humungous hit."

In the sweet spot between novelty song and purebred pop, a slinging, rubber band beat drives the rhythm of "Frijolitos Pintos" into dance. Over the glad accordion, Escobar's voice booms into the microphone with a climbing, enchanting melody. While most kids her age were learning the basics of arithmetic, Escobar had some real-life numbers to mull over, with a record that sold over 250,000 units.

After the big, gold-plated step into the world of tejano, the father-daughter team kept the momentum going with an abundant string of recording dates on regional labels like Nopal, Bernal and Cometa. "From '65, to about '72, my father made it a point to put out a record every two-three months, even if it was just a 45, to keep new music on the airwaves," said Escobar. "I want to say, between my dad and I, we have over 500 recordings."

As an adult, Escobar has built on the extraordinary groundwork laid down in her childhood. With her late husband, Japanese accordionist Kenji "El Gato" Katsube, Escobar created some of the most culturally loaded conjunto ever recorded.

"Kenji was listening to a Ry Cooder album and he heard an instrument he didn't know," Escobar explained. "Well, it was Flaco Jimenez playing an accordion. He decided to mail-order one. When he got it, he taught himself and began playing in LA and picked up a California style on the accordion."

When the pair met in the '90s, their marital and musical connection fulfilled a weird prophecy by Escobar's father.

"I remember one day, my dad told me that one day I was going to meet a Japanese conjunto musician," Escobar said. "I thought it was hilarious. And he looked at me straight in the eyes and couldn't have been more serious."

Through the joys and hardship of 50 years in music, Escobar finds solace in her South Texas hometown of Alice, an otherwise fairly desolate outpost yet a bona fide hotspot of tejano culture.