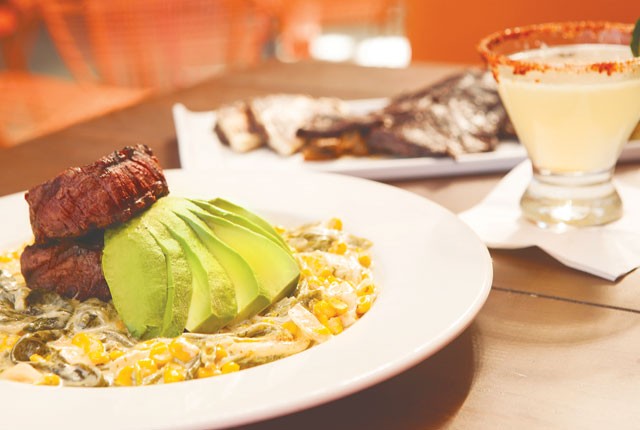 For some time after 1910, the year the Mexican Revolution began, San Antonio was referred to as the de facto capital of Mexico; Francisco Madero had fled here, along with numerous other políticos desgraciados. The current Mexican diaspora has left the country for other reasons, but in the field of food, at least, Mexico's loss is once again our gain.

The owners of the newly opened La Tequilera del Patrón hail from Monterrey, and have already proven a commitment to San Antonio with Costa Pacífica, a seafood restaurant worth visiting on Loop 1604. At La T, we thus expect a contrasting emphasis on northern Mexico's meat-based culture. And on tequila.

To make things easy, avoid the wimpy, pre-batched house margarita. The top-shelf version doesn't pack much more punch — though an attentive waiter, noticing that we weren't drinking it, took it back to "make it better." Gesture appreciated, but not much better.

A better drink is the Cucumber Twist. It's made with Corzo Silver, fresh lime and muddled cucumber, sports a salt and chile rim, and is well worth your attention at $8. Three on-draft tequilas, chilled to 29 degrees, are available for sipping, along with those on an extensive list. From it, we selected the Ambhar Reposado. I wouldn't repeat it, but if bent on investigating other unknowns would definitely ask for "the big glass" — which translates as the Riedel tequila flute we were brought after expressing surprise at having been served an $11 reposado in a caballito, or tall shot glass.

La T occupies the building initially the home of Boccones, and it currently has the look of a resort hotel gone slightly astray; the seating is mostly blocky banquettes flanking tables too deep for good conversation, and the main dining room was largely empty at around 10 on a Thursday night, not a good sign in a place with Mexican nationals firmly in its sights. (The adjacent, semi-outdoor bar/dining area was livelier, however.)

The menu is more encouraging at first glance; it's hard not to love at least the sound of a dish called frijoles con veneno (beans with poison). Lentil soup a la charra was a pleasant first taste, though the advertised "sausage" component turned out to be sliced weenies. But the barbacoa, described as "Mexican traditional beef steamed in a penca de maguey," was a huge disappointment. No pencas (the tough maguey leaves) were present, and though the serving was more than generous, the shredded beef lacked any soul whatsoever. Bring me the greasy, Tex-Mex rendition any day. Even a toasty salsa verde adorned with strips of grilled queso panela didn't turn the dish around.

Despite the fact that its masa cup went soggy, another intriguingly named dish, atropellado (knocked down, run over…) norteño, demonstrated that the kitchen can turn out dishes with real depth of flavor. Yes, the dried beef was chewy, but that's machacado for you. Another appetizer, the poblano empanada filled with rajas de poblano, melted white cheese and (very little) corn, was too loosely cheesy for the tasting team, though the flaky pastry was perfect. But for all of its heft, a chamorro de puerco (pork shank), baked and "marinated with our house recipe" bombed for lack of flavor. Its bed of bland, refried black beans didn't help matters, and the toreado onions were strident, but some proper jalapeños toreados helped ease the pain by adding some.

However, I am happy to report that the Arrachera del General sported truly beautiful pieces of flavorful, uncut fajita meat, cooked to the desired medium rare. Yes, the accompaniments were forgettable, but bring on the beef again — preferably with a shot of, say, a Herradura or Tres Generaciones reposado in a proper glass.