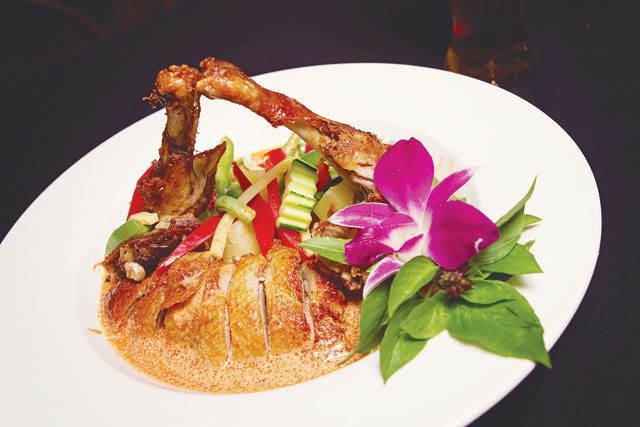 The Skinny
Thai in search of an identity

It’s hard to know exactly what Lemongrass’s aspirations are. This new Thai restaurant in a center at Thousand Oaks and 281 is in the company of such chains as Freddy’s and The Egg & I (though John the Greek is a local contender in the same center). Its décor is off-the-shelf inoffensive with none of the usual Thai condiments on the cloth-draped tables — and a specials board that one day listed a lobster dish with a hubris-informed price nearing $30. The lobster was advertised as being served over steamed vegetables, but if they are anything like the array that underpinned an order of tempura-battered soft-shell crab recently, don’t bite.

The “imported” soft-shell crabs are served a couple of different ways at Lemongrass and, in retrospect, a version that places the crab on a salad and serves it with a “spicy lime juice sauce” would be far preferable to the rendition plopped atop the relentlessly plain steamed veggies — as bright and decoratively cut as they were — with a vat of chili garlic sauce for dipping. The sweet sauce cloys quickly with the sturdily battered crab alone; if you try to pump some life into the veg by anointing them as well, the whole plate quickly goes south. Besides, the crab tasted as though its elevated carbon clawprint had resulted from a long, slow voyage.

While the Thainicity of the crab dish could possibly be contested, the green papaya salad doesn’t need to jump through elaborate, long-form birth-certificate hoops to prove its parentage. And while Lemongrass might legitimately be accused of gilding this lily by adding both shrimp and krab (the salad is sometimes served with tiny, dried crab, however), the result is stunning regardless. Though none of the menu’s dishes are indicated as spicy (“We can make anything spicy you want,” said one black-clad waiter), the waitress was careful to ask about heat level on this one. “Out of ten? Six,” I confidently replied, not knowing what the kitchen’s parameters were. And six is plenty for this mound of crisp, shredded papaya spangled with said seafood and further enhanced with tomatoes, raw green beans, lettuce, and chopped peanut. OK, I find little to love in raw green beans, the tomatoes wouldn’t be missed if removed, and much of the lime-based dressing was left puddled on the plate when all else had been consumed. But at $6.99 this entrée-sized plate is both a deal and a possible indication of those aspirations. Fresh and bright?

For just a dollar more you can net seafood and duck versions of any of the 17 basic preparations to which you add your chosen protein. (You can also stick with vegetables and/or tofu.) Eggplant Delight is listed on both lunch and dinner menus, and I tried it with pork, again at level six. Must have been a different cook, as the dish could have used a lot more heat to punch up what was otherwise a fairly bland dish, the Thai basil sauce not doing enough to elevate the slightly undercooked eggplant.

But another lunch special, the tantalizingly titled Queen of Duck, exceeds expectations. If you select the curry sauce, as I did at the waiter’s recommendation (he apparently read my mind when he warned that the tamarind sauce option was sweet), you may be surprised to find that the curry is more like a broth. This is not to be construed as a problem; the broth almost pulls the raw green beans into the fold in this case, and it adequately tempers cubes of pineapple. There’s a crisp leg, augmented by several slices of what is likely thigh meat. The result is both bright and earthy. If this is what the kitchen is really all about, then unleash the queens. •