Now Permanently Closed, What Can We Learn From Hot Joy's Failed Dallas Experiment

Casey Howell for SA Current
At the risk of alienating myself from the food writing community at-large, it's time to discuss the recent shuttering of Hot Joy's Dallas adventure.

Here's the gist: After announcing in mid-April that Hot Joy would open a two year pop-up in Dallas' Uptown area, the experiment was panned by critics and permanently closed this past Saturday.

Reviews ran the gamut: In August, Leslie Brenner was generally into it saying: "The vibe is irresistible: retro-pop Shanghai-Western, with tiki drinks, intimate wooden booths and colorful paper dragons blazing across the ceiling. Just out of the gate, the food and drink, refreshingly affordable, have their ups and downs"; Mark Vamos gave it two stars while also billing the eatery as "flamboyantly kitschy Oriental, freighted with all the potential insult of that outdated term"; and finally, Brian Reinhart of the Dallas Observer took the restaurant to task with last week's review, "Hot Joy's Food Is Almost as Bad as its Cultural Cluelessness."

Chad Carey, the frontman and self-admitted "white bro" per Reinhart's review, shared the following with the Current in an email.

"I’m sure it seems odd to close it after just 15 weeks…but this is why we announced it a "pop up". We went on this adventure with Front Burner within a super-fast timeframe…and didn’t really know how it was gonna go...how the Dallas market would react to it, and how we would manage a Hot Joy 300 miles away from home, and how the relationship between our companies would work…all that stuff.

Obviously, if the place was on track to make $5mm/year we wouldn’t be closing it. And I don’t think that Hot Joy, in that location anyways, was connecting with Dallas like we’d both hoped.

But the reality is that the Front Burner crew has a ton of things going on…we have 3 restaurants and a music venue (and, like I said, we’re a long way away from Dallas)…and we just thought it made sense to “call it a day”. We’re on great terms with the entire Front Burner crew, who were really high-quality, fun partners on this project."

In the days following the review's publishing, Reinhart received plenty of hate mail (funnily enough from "Hot Joy hardliners, old white dudes, & Jindal '16 strategists,") and whether it came up in conversation with friends, colleagues or Facebook tag notifications, the review was present. How did one of San Antonio's most lauded eateries go from beloved within 1604 to bashed just a couple hundred miles away in the Big D?

I'm not one to throw out (gag me) think pieces without putting forth actual thought. After quieting the noise of the NOLA.com report alleging John Besh's restaurant group fostered a culture of harassment, and while keeping up with the latest Russia scandal, trying to stay on top of restaurant news in San Antonio, and coming to terms with my own thoughts about Hot Joy, here are a few lessons I've gleaned.

1. Dallas is NOT San Antonio.

This is no news flash, but as one reader pointed out in the Dallas Observer's lit comment section on the closed Hot Joy blog, though located in the same state, the two major cities couldn't be more different. Dallas' median income is $5,000 more than any other Texas city according to the Department of Numbers website, and is home to two James Beard Award winners to date, along with a several dozen semifinalist nominations. San Antonio has yet to earn that coveted prize. This isn't an excuse for Hot Joy's misgivings (we'll get there), but the stats speak to the cities' disparity when it comes to dining.


2. Location (and timing) is everything.

To refresh our collective memories, Hot Joy has always been an experiment. First as a pop-up launched in late 2012 inside The Monterey (read: basically the restaurant that started it all for new-wave San Antonio food lovers — fight me) held Sundays and Mondays and manned by chef Quealy Watson. People clamored for a seat, and raved about the crab fat caramel chicken wings.

Due to the pop-up's fandom, Hot Joy continued through mid-2013 when it was announced the lab was moving to the former home of China Latina (a Mexican-Asian fusion joint by Lisa Wong). The experiment moved into a new home in April of 2014, and was an immediate hit due in part to the over-the-top design by Gregorio Mannino that blended every aspect of Asian culture the kitchen was using into a jarring space unlike anything San Antonio had ever seen before (we went as far as to profile the artists behind it several times over).

For this writer, Hot Joy meant new ingredients being pushed to the forefront (see black curry of pork blood and Burmese curry paste, not found in other menus across the Alamo City), in a playful setting, in the city's "It" area of Southtown, that stayed open late every weekend night. By August of 2014, Bon Appetit had caught wind of San Antonio's Mission Chinese and named it the No. 7 best new restaurant in America.

Since then, opening chef Watson has moved on to open his own Tenko Ramen shop. Hot Joy has seemingly survived the BA hordes albeit a few ups and downs, and John Philpot's been at the head since June 2016, with his latest menu hitting tables two weeks ago according to Carey. 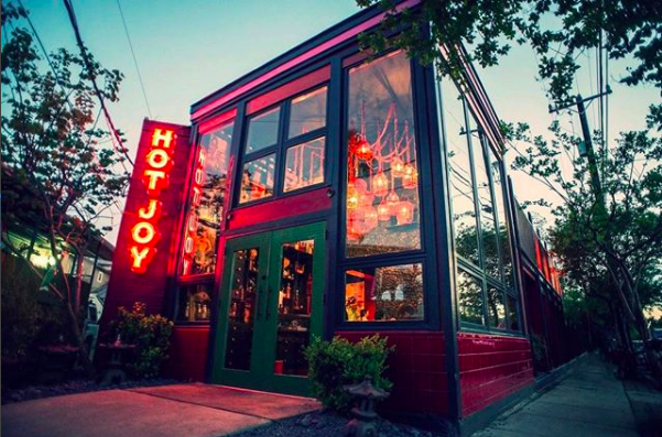 Instagram/Hot Joy SA
As I write this I’m watching more boba tea shops (Kung Fu Tea, Snowflake Paradice) move into the area. Without giving Hot Joy all the credit, the city has seen an explosion of Asian fare since its opening with Sichuan House opening in 2015; Ming’s Thing opening late last year inside a boxcar; and a slew of ramen shops have followed suit including Nama Ramen, Wild Goji and Suck It The Restaurant, all opened by Asian-Americans. Suck It The Restaurant serves up a tasty rendition of barbacoa pho with Big Red bubble tea, by the way. Oh, and one of the shops serving up Thai-style rolled ice creams has started adding churros and Hot Cheetos to their cream base (separately, but still a questionable move).

Earlier this May, amid accusations of cultural appropriation, Kooks Burritos in Portland, Oregon closed after owners hinted at stealing techniques from señoras during a trip to Baja California. The shop was all but set on fire.

Before bowing out as the Editor-in-Chief at the OC Weekly last month, Gustavo Arellano tackled the subject of two “clueless white girls” stealing tortilla recipes to open a hipster taco cart in article titled, “Let White People Appropriate Mexican Food—Mexicans Do It to Ourselves All the Time.” In it, Arellano shared his thoughts on cultural appropriation and ultimately capitalism.

“The Mexican restaurant world is a delicious defense of cultural appropriation—that's what the culinary manifestation of mestizaje is, ain't it? The Spaniards didn't know how to make corn tortillas in the North, so they decided to make them from flour. Mexicans didn't care much for Spanish dessert breads, so we ripped off most pan dulces from the French (not to mention waltzes and mariachi)," Arellano wrote.

Empty Stomach’s intention, to my knowledge, isn’t to disrespect Asian cultures. It was to expand on the spirit of dining The Monterey had establish, while delivering quality Asian fare of all kinds, with a goofy culinary twist (see Spam fried rice). It was, as Bon Appetit put it, “dude snacks” and “stoner food,” in the similar vein of Mission Chinese and Mott St.

Perception is varied (see Brian’s 2017 review of HJ 2.0, see my review of OG HJ in 2014); and maybe HJD's food wasn't as charming as it was back home, or perhaps no amount of fish sauce could have saved Reinhart's experience after taking in the decor. Innovating (and we're using the word loosely) has its risks and wanting to expand a culinary empire isn’t for the faint. Though no changes have been announced for Hot Joy’s original location (and I doubt we’ll see any going forward), the lukewarm reception received in Dallas can serve as a lesson for business owners and restaurants going forward. Bring on consultants (if you can afford them), contact sociologists (if you know how), and definitely don’t cross your chopsticks in take out boxes (this is actually a real faux pas and you should avoid doing it at all cost).

Or we can just go eat “crab fat” wings, and barbacoa pho and call it a day.