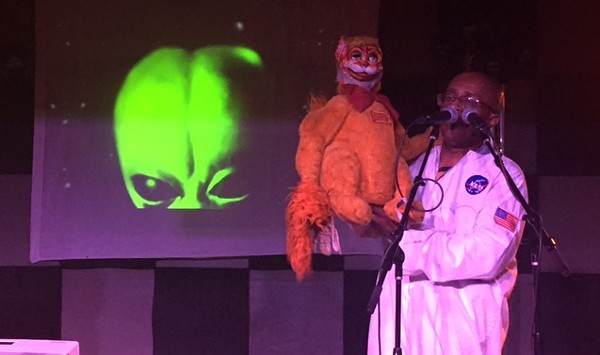 Regina De La Garza
Liebe Hart, Jason the puppet and a peaking alien.
For many, the appeal of David Liebe Hart is the wild, what-the-fuck quality of a character who, as a recurring presence on the Tim & Eric Awesome Show, Great Job! and Check it Out! with Dr. Steve Brule, sang seemingly insane songs about aliens visiting him and their interstellar ways, milk and puberty. Salame! For them, the man is secondary to the ridiculous nonsense; the elementary delight of seeing and hearing a human being with a creepy cat puppet singing about the most intricate ways of an intergalactic race of beautiful women. These shows, the brainchildren of Tim Heidecker and Eric Wareheim, operated as an absurd, spastic comedy. A Dada approach to hilarity that was ... fucking hilarious.

Others, however, look a little deeper. They crave the truth about this man, his "act" and what's going on when the cameras stop rolling. Was he a brilliantly-portrayed creation of two moronic geniuses? Or, is the "act" anything but?

Here's a clip, for those uninitiated:


I got a chance to ask David's "manager", tour partner and bandmate Jonah Mociun (aka Th' Mole), following their performance last night (Sunday, April 10) at Limelight about the man, the "act" and whats going on behind the curtain.

First of all, the videos that accompany you and David's performance are brilliant. The show/concert is so compelling.

The reality is David was doing that shit before Tim and Eric. His public access show was an inspiration to them.

Do you feel like you're taking advantage of David in any sort of way?

What was the impetus for your partnership?

Do you agree that it feels a little bit like, just like Tim & Eric, to see a young, white male working with this 50-someodd-year-old black man who makes ...

It walks the line, yeah, yeah ... it's uncomfortable. No, I totally get it. I've looked at Tim and Eric and their relationship to David and been like, 'There's something wrong here because this dude is still fucking broke and on the brink of homelessness and they're probably pretty fucking rich.'

I don't know the real story about that relationship, but, yeah. I've had to be a bit suspicious. And, I've also, after working with David and getting to know some of the story filtered through his reality, it seems like they've spent ten years of actually giving him a lot of charity and patience and at a certain point maybe they felt like they were enabling him. Maybe at the point where they felt like I stepped in and was actually keeping him afloat it wouldn't be doing him a service to keep giving him free rent and stuff. If he was actually homeless, then maybe they'd step in.

What was the main reason you wanted to get involved?

In the beginning, it was just like, I think it'd be cool to make a song with this guy ... So we did that and he was like 'I really like that song, my bandleader doesn't wanna go on tour with me, maybe you can do that.'

So your dynamic is sincere, when you act annoyed onstage or argue?

Do you see how the mystery of your dynamic, David's talents, what-the-fuck appeal is so fascinating to viewers? Because people don't know what to think?

A lot of people see it differently, too ... Some people are less curious and they're just like, 'This is hilarious! I love it!' and that's all they get from it. But, yeah, definitely. It's compelling in that way, the mystery of what's going on ... It would make a fucking hilarious and really interesting documentary to just see us traveling on these tours, the shit I put up with. There's a lot of comedy there and a lot of really, just like interesting psychology of 'What is really going on with this guy?' How much of your popularity is people basking in the novelty?

A lot. There's just a lot of just people being starstruck, just being close to this guy that's famous that they enjoy watching on TV. But, then, yeah, there's a lot of people like the people that we stay with that spend a little more time, their first question is 'How real is this? Is this an act?' And that question gets answered pretty quickly. And then it's like, 'What is this then? It's not an act. What is the dynamic here?'

To be honest, I don't understand it completely. I'm an artist and I'm a musician and David is my muse. He allows me to have an audience and he's really receptive to my artistic ideas, so we're doing this for now. It's fucking maddening sometimes but it's also fulfilling. It's fucking weird.


In between the impressive songs on topics as diverse as beautiful alien women, celebrating your voice (which comes out of your face) and a "better media" Jonah and David argued onstage about David's frequent bathroom use while on the road. They verbally sparred in what were sincere and hilarious rounds of "Well you always ... " and "Yeah, but you're the one ..."

For some, it was a brilliant act. Two men engaged in ludicrous performance art. For others, that question, is this a joke? is the appeal. The grey area of not knowing what's real, what's OK to laugh at – the age-old predicament of "Are we laughing with you or at you?" is confronted head-on.

And the truth? They're two men enjoying their performance, enjoying the attention and the appreciation. They are very real.