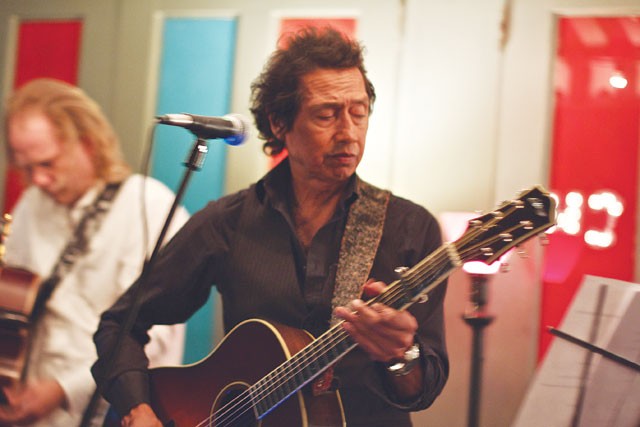 Steven Gilmore
This is how you do it, guys: Escovedo’s master class at Havana’s Ocho.

Have you been to the music events at Hotel Havana’s Ocho Lounge? Located at the bar/restaurant’s outdoor patio, they may very well be one of San Antonio’s best-kept (free!) musical secrets. And when you add a name like San Antonio-born Alejandro Escovedo to the mix, you must either live in a jar or have a serious hearing problem not to show up.

In the first appearance of his three-day residence at the hotel (he’ll play again on the 16th and 30th of the month), Escovedo and his band reminded us once again how to conceive, nourish, and protect a song — and how to make it explode, literally. Backed by his band (David Pulkingham on guitar and vocals, Bobby Daniel on bass, and Hector Munoz on “drums,” that is, a snare and high-hat, the only elements that could fit on the small stage), Escovedo started with two different versions of two new songs: “San Antonio Rain” (a haunting ballad that actually talks about our lack of rain) and “The Bottom of the World.” In both cases, he started with the song’s original ballad version, and then sped up the tempo and turned them into rockers, but I beg you, Ale: keep “San Antonio Rain” as a ballad.

In “Bottom,” Escovedo was at his most Dylanesque, delivering each line with the urgency and authenticity he’s known for. He’s never tried to sing like Dylan. All he does (and all Bob does) is make sure the song gets everything it needs, and he did it throughout the night, despite the fact that on the up-tempo version of “Rain” Munoz took a while to warm up (he needed to beat on that snare with more conviction). After that, it was Escovedo at his best, stopping on a dime just when the night was becoming a crowd-pleasing request event. He did please the woman who wisely asked for “I Was Drunk,” one of his key songs (complete with a superb flamenco-ish break by Pulkingham) and a couple of others, but soon enough he was back doing his thing, which roves from heartbreaking dark ballads to exhilarating rockers and rancheras played like a bolero trio. Make no mistake: Escovedo has a superb rock band with lots more lights than shadows. The hepatitis C scare that almost killed him 10 years ago is so gone; the guy, judging by his new songs, is doing some of his best work ever and looks better than ever (he’s 60 and looks 40).

I repeat: Escovedo. Free. Hotel Havana’s Ocho Lounge. November 16 and 30. The place to be.