Felicia Esparza
Jerry Jeff Walker performs at the historic Gruene Hall.
As my partner, Felicia, and I were gawking at historic Gruene Hall's memorabilia and Texan holiday decor, 72-year-old country troubadour Jerry Jeff Walker strolled right past us, from the back of the hall, carrying his own guitar. As he calmly ambled towards the backstage area, apparently preferring a people's entrance to the VIP treatment, the anxiously waiting, sold-out crowd erupted in ovation. This unusual entrance, and the reception it received, set the tone for one of the most intimate and open-hearted performances I've ever had the pleasure of experiencing.

Walker opened the show, in what has become his trademark fashion, with a hearty "OK Buckaroos," the phrase introducing what is perhaps the man's most representative song, the loose and ever-changing ode to making it up as you go along, "Gettin' By." With its mostly ad-libbed verses and uptempo, jazzy rendering, it was an impeccable start to an evening to remember.

Next, looking over to the side of the stage, Walker chuckled and said “[I’ve] Got the grandchildren here tonight, so I’ve been told to get to the Christmas songs early.” It was a statement which did two things. First, it answered the question on everybody’s mind: “Who the hell brought kids into this beer hall!?” And secondly, it let us all know that we were in for a special set—an ageless and timeless set that belonged to every one of us, from the oldest to the youngest. The four Christmas songs that Walker and his three piece backing band performed—“I’ll Be Home for Christmas,” “Rudolph the Red-Nosed Reindeer,” “White Christmas” and “Jingle Bells”—were hardly lazy toss-offs to please the grandkids and begrudgingly acknowledge the season. On the contrary, these songs, like all the rest in the 20-plus song set were played with the vigor and cheer and bravado that has, over the past 45 years, made Walker one of the most endearing and captivating performers we’ve got.

After the holiday detour, Walker played the Stephen Fromholz-penned hymn to the dead roughnecks of the world “Man With the Big Hat.” And as he sang “Drink up to the cowboys a-dead or a-dying / drink up to my compadres and me,” one couldn’t help but feeling that this song—a longtime staple in the man’s live set—had become deeply personal to the singer. To liven things up again, Walker prefaced one of the crowd’s obvious favorites (“Trashy Women”), with the nearly-roared admonition that “We’re in Gruene Hall on a Saturday night, let’s rock it.” And that’s exactly what they did.

From there, Walker went through some of the heavy-hitters; his most famous, successful and beloved song “Mr. Bojanges,” delivered with a note-for-note sincerity that seemed to indicate he’d never get tired of playing this song for people, the Guy Clark-penned 1970s favorite “L.A. Freeway,” a rousing song about escape and bucking the trend of city living, and “Viva Luckenbach,” a beautiful tribute to the legendary Texas town at the spiritual center of the outlaw country movement. 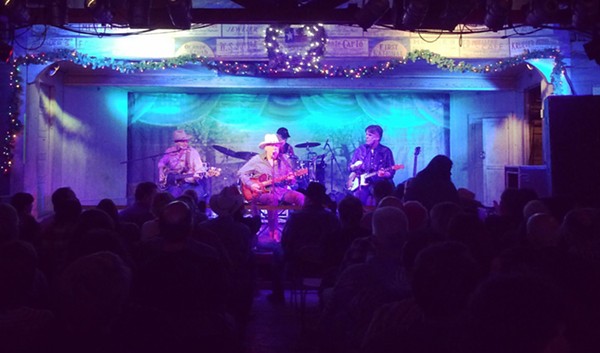 Felicia Esparza
Jerry Jeff Walker performs at the historic Gruene Hall.
The back end of the set was just about as perfect a collection of country songs as you could imagine. From Gary P. Nunn’s sentimental and humorous, Texas-worshipping and London-dissing, honkytonk singalong epic “London Homesick Blues,” to John Denver’s “Back Home Again,” Todd Snider’s “I Think I’m an Alright Guy,” Guy Clark’s “Desperados Waiting for a Train,” and Rusty Weir’s “Don’t It Make You Wanna Dance”—Walker weaved his way through the evening with a remarkable and casual virtuosity and a twinkle in his eye. As good as a songwriter as the man is—and he’s one of our absolute best—he is every bit as adept at making someone else’s song his own. Through the impeccable choices he makes, stories he chooses, and treatments he is able to give these songs, Walker’s single greatest asset is the strikingly penetrating eyeryman quality of his booming voice. Apart from that, he’s able to connect with his audience on a deeper level than most others would even care to. That’s just the thing about Jerry Jeff Walker: he knows how to make his audiences feel as if the songs he plays are about them and their loved ones … because they are.

Ending the set, appropriately enough, with “Those Were the Days” from 1998’s Cowboy Boots and Bathing Suits, Walker summed up the nostalgic longing that the evening seemed to engender in so much of the audience, including myself. But for Walker, perhaps the most fully present person in the room on Saturday, looking back is only part of what he does. If you really listen, you’ll notice that his songs, and all the wonderful songs he’s made his own, tell us just as much about how to make the future, as how to revere the past.